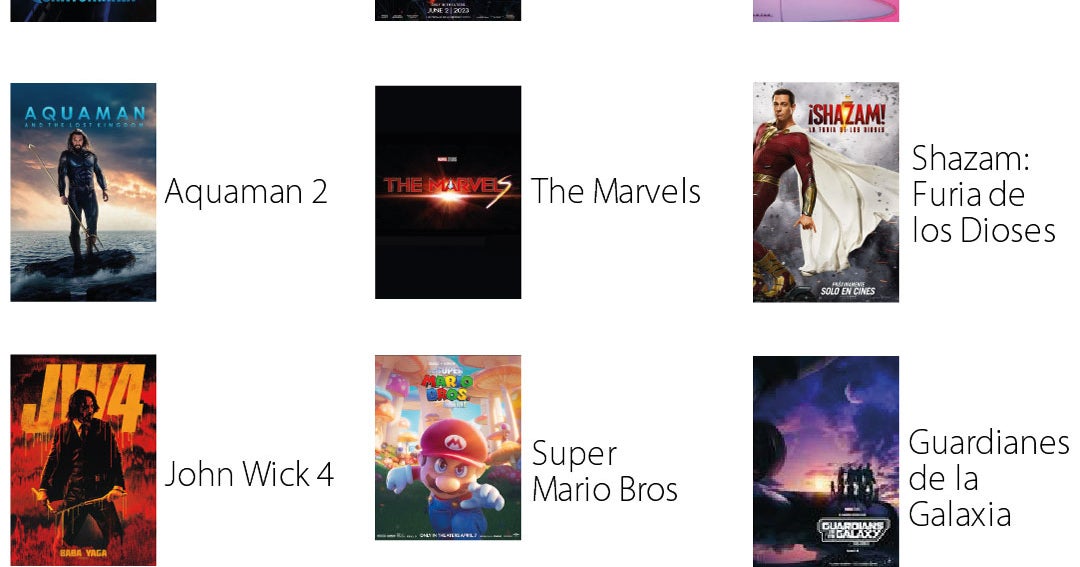 Among the entertainment products that are eagerly awaited by the general public are the movies that will be released during the year. Large production companies such as Disney or Warner have a planned agenda, among which they mix with other producers, so the main ones of the year are presented.

The third installment of the hero Ant-Man and his companion Wasp will be on February 17, exploring the quantum realm and facing off against the new villain known as Kang, The Conqueror, introduced during the Loki series on Disney Plus.

Spider-Man: Across the Spider-Verse

After the confrontation between Miles Morales and the villain King Ping, our protagonist will be involved in a conflict around the multiverse along with his companions from the first installment, Peter B. Parker and Gwen Stacy. Its premiere is expected to take place in June.

With a budget of US$205 million, the hero and king of Atlantis, from the DC universe, will find himself with a new challenge to protect both the surface and his maritime people. The premiere will be on December 25, just under an exact year.

Uniting the heroine of space, Carol Danvers, along with her biggest fan following, Kamala Khan, and the character Monica Rambeau from the Wandavision series, in a new conflict that will unfold on July 28.

Shazam: Fury of the Gods

The sequel to the children’s hero Shazam will be released on March 17. Our protagonist will be experiencing a crisis of confidence. He doesn’t believe he deserves his divine powers, and with the help of his friends, he must prove himself worthy of his powers in order to save the world.

After countless murders and difficulties to be able to live and respect the memory of his deceased wife, John Wick will have a new goal to follow in this installment. Keanu Reeves prepares to fight the Marquis de Gramont, played by Bill Skarsgård, on March 24.

The classic story of the iconic video game industry character Nintendo will be placed on the big screen to present the origins, adventures, training and challenges they will face. That includes how Mario, Chris Pratt, will show his conflict against Bowser, Jack Black, on April 7.

Guardians of the Galaxy 3

On May 5, a new adventure of the space protector group led by Chris Pratt’s character, Peter Quill or Star Lord, will be presented with a new goal in mind.

Transformers: Rise of the Beasts

Optimus Prime and the rest of the Autobots are back for one last installment of the sci-fi saga produced by Michael Bay. This time, the Transformers are fighting an epic battle on the streets of New York City on June 9.

With a new budget of US340 million, a new installment of the franchise of illegal racers called Fast and Furious is made. Starring Brie Larson, Rita Moreno and Jason Momoa will be included in the film, which hits theaters May 19.

The film of the famous fastest hero that exists will be made on June 16, as long as unforeseen events do not arise in relation to the production company

Indiana Jones and the Call of Fate

Harrison Ford’s Archaeologist’s Last Adventure. Director James Mangold is helming the fifth installment in the action series, which stars Phoebe Waller-Bridge, Antonio Banderas and Mads Mikkelsen. This fifth and final installment will be made on June 30.

The mysterious seventh installment of the action series, which will premiere on July 14, has Tom Cruise performing some of the dangerous stunts. The film also features Eugene Kittridge, the former IMF director from the 1996 Mission: Impossible TV series, who returns to antagonize Ethan Hunt.

Denis Villeneuve’s sci-fi epic continues on November 3 where the successful first part left off: Paul Atreides, played by Timothée Chalamet, seeks to avenge his father and save the universe with the help of Chani, Zendaya’s character, and the Freman, the guardians of the spice.

Previous Report looting during winter storm in New York
Next They were stranded in the storm. And then the Christmas miracle happened.