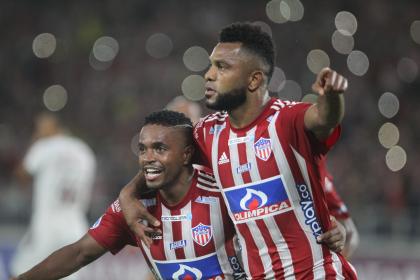 Miguel Ángel Borja has already left the elimination with Junior in the League aside. While the championship is reactivated in Colombia, the rumors of an eventual transfer to River Plate begin to increase, despite the fact that, in the player’s environment, at first, they do not recognize that there are approaches on both sides.

The closing of the championship was not what was expected, since the forward was questioned by the fans, due to the lack of a goal in definitive moments. In the previous days, the possibility of Borja leaving the shark, bound for Argentina, has been mentioned.

According to information from the newspaper Olé, the negotiations are already underway, with the possibility of moving to Núñez’s team “Borja’s circle assures that he is tempted to put on the band and in the club they see the most viable pass in the talks with Junior ”.

“He gave birth to River to start negotiating fine tuning with his Junior peers in the search to buy 50% of Borja’s file, for which the sharks paid three and a half million to Palmeiras six months ago, who is owner of the other half” they added about the possibility of starting to finalize the transfer.

In addition, they stated in what terms the signing could take place, where Junior hopes to receive a large part of the money “Very close in numbers, it would be for a sum between four and five million dollars. Junior’s intention is that the transfer be paid in few installments, but above all with a large payment at the time of signing. If the forms of payment are resolved in accordance with the corresponding guarantees and the last details of the conditions of the player’s contract are agreed, in the next few hours Borja would wear the band “.