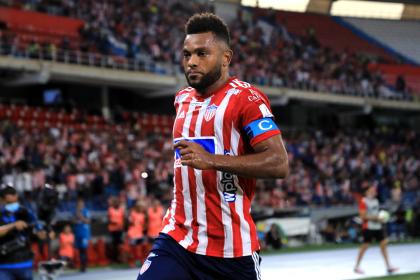 It is no secret to anyone that Miguel Ángel Borja has earned recognition for his goals from one moment to now. After returning to Junior de Barranquilla after his time at the Gremio de Porto Alegre, the Cordovan was immersed in several criticisms for the many he was able to convert, but he was sweet with the goals, and he was intractable. He scored 16 goals in 27 games played.

Of course, he missed two goals sung, one against Atlético Bucaramanga and another against Atlético Nacional, the latter in a key game for the ambitions of getting into the final. People keep those mistakes, but they don’t talk about those 16 goals he scored with Junior de Barranquilla. His presentations managed to capture the eyes of the fans of South American football and River Plate.

The millionaire team led by Marcelo Gallardo claimed the Colombian after the departure of Julián Álvarez and finally took Miguel Ángel Borja. An arrival that faded in long stretches, but that finally materialized successfully. Borja won the hearts of River Plate fans, which is not easy at all, playing just three games.

Against Aldosivi in ​​the second match played by Miguel Ángel Borja entering the complement, the Colombian participated in two goals, an assist that was soiled by a touch from an opponent, a goal pass that was, and he closed with a flourish scoring his first goal with the River Plate jacket. There he enlightened the fans who even dedicated a song to him with the nickname of the ‘hummingbird’.

Miguel Ángel Borja arrived with a bag full of criticism of Argentina, but little by little he has been changing them for joy. However, against Sarmiento when he received his first title from him, his participation did not matter and River Plate lost against the Junín team 1-2 at the Monumental de Núñez.

Thus, Miguel Ángel Borja with his participation with Junior de Barranquilla made Marcelo Gallardo set his eyes on him. In international competitions, Borja put his name in an important statistic. According to the International Federation of Football History and Statistics (IFFHS), they raised a ranking of scorers in international tournaments, whether with clubs or national teams, in which it appears in Tierralta, Córdoba.

As of July 31, 2022, and only based on the second half of the year, Miguel Ángel Borja managed to score six goals at the international level. Five with Junior de Barranquilla, and one with the Colombian National Team, that half a dozen goals allows him to position himself at the same level as Lionel Messi and Robert Lewandowski. The table is led by Karim Benzema, intractable in his season with Real Madrid. In addition, there are three players who went through Colombian football such as Juan Ignacio Dinenno, Germán Ezequiel Cano and Bernardo Cuesta from Deportivo Cali, Medellín and Junior respectively.

Christian Pulisic, 2 goals for Chelsea, 4 for the United States = 6 goals