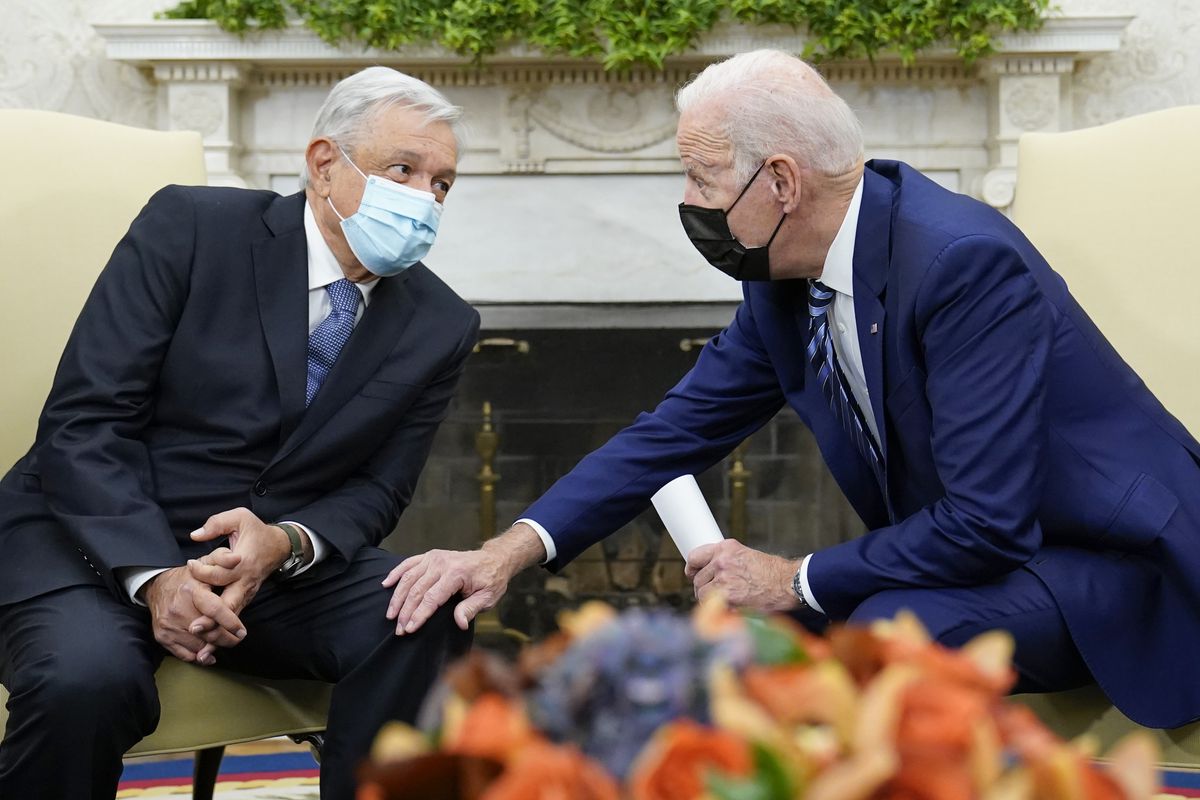 For the United States, Mexico has become the neighbor that asks for things one day, and says no the next. And vice versa. Examples of the fickle attitude of the current Mexican government can be found in any issue on the complex agenda, which has made the country south of Bravo the uncomfortable neighbor of the North American power.

One of the most recent episodes that illustrate the unpredictability of the relationship is carried out by the Attorney General of the Republic, still in charge of Alejandro Gertz Manero.

What luxury for those who were able to witness the face that US officials will have made when they learned on Thursday that the Mexican president asked Washington to publish allegedly incriminating evidence against Genaro García Luna, former Secretary of Federal Public Security.

That is being asked of US agencies at the same time that all of a sudden collaboration with them is being suspended. And that attitude is assumed not only by Andrés Manuel López Obrador, but also by the FGR.

Well-informed people comment that in recent weeks the Attorney General’s Office unilaterally suspended, and it should be said capriciously and irresponsibly, collaboration with various US security agencies.

The reason for that interruption was the personal agenda of the Prosecutor, who would have imposed that institutional disdain after interlocutors from Washington agencies refused to provide him with information, through unofficial channels or outright outside the law, about descendants of his ex-sister-in-law, nonagenarian who, as is known, wanted to put in jail.

According to that version, what the Prosecutor’s Office demanded unofficially was totally improper and could be illegal. As it was not answered in the affirmative, the Mexican side made its counterpart feel the cold. From the United States they began to call their staff in Mexico to question the closure of the collaboration channels, and the response was that the prosecutor asked for things that could not be delivered.

That was the preamble to the request, now in public, by President López Obrador to the United States to reveal part of the investigation he has against the former collaborator of President Felipe Calderón.

Regardless of whether granting such a request could violate due process, it would be natural for Washington to drag its feet in the face of a new demand from a government whose actions have become unstable, capricious and unreliable. Because this judicial request is far from the only issue where the bilateral relationship is in a field of turbulence and uncertainty.

The problems on the agenda between the United States and Mexico grow almost weekly. In the one that is coming to an end, a new front was opened in the energy sphere, already saturated for some time with clashes and disagreements between the interests of the two countries. On Monday, Energy Secretary Rocío Nahle sent a letter to the regulatory authorities to urge changes to be made so that everyone buys natural gas from the Federal Electricity Commission.

Given that in this six-year term the autonomy of the Energy Regulatory Commission (CRE) is a dead letter, and given that it would be naive to expect that the CRE and the National Center for Natural Gas Control (Cenagas), the body to which the official letter was also sent , evaluate the warrant and weigh its relevance with criteria that attend to the best competition and greatest social benefit, it is taken for granted that these instances received an instruction more than an invitation and that they will comply with it promptly and even with pleasure.

The news of the warrant, known a couple of days after its issuance, took by surprise a sector that was already dismayed by a series of abrupt changes in the production and purchase of electricity; and among those who have suffered shocks from unilateral government decisions are US companies.

And although protections and appeals have already been announced in court before the measure proposed by Nahle, the truth is that this rudeness, which crushes national and foreign interests again, is so typical of the López Obrador administration that it is even surprising that they have not tried it before.

Andrés Manuel sees himself as a patriot. And his agenda to strengthen emblematic companies of the Mexican energy past has been one of his main flags since his first electoral campaign, in 2006.

After being defeated in the Chamber of Deputies last April, his initiative to modify the electricity market, in order to favor the CFE without measure, has resolved a series of impositions on the companies through which de facto he is getting what he was looking for of I swore with the law that was blocked by the opposition in San Lázaro.

The measures of the new blow, published on Friday by the Mexican Institute for Competitiveness, aim to “strengthen the Federal Electricity Commission by forcing greater use of its underutilized natural gas transportation capacity” but it would “attack competition and free competition in the sector, because it would force the users of the natural gas transport service (via the gas pipelines of the Integrated National Natural Gas Transport and Storage System) to buy this hydrocarbon from the CFE subsidiaries in charge of the commercialization and supply business. of fuels”.

The IMCO explained in a statement that we are facing the scenario of violations of two articles of the Hydrocarbons Law and that, in addition, the measure “would have detrimental effects not only for the transporters and marketers of this input, but also for the end users – especially the industrial sector—which would be subject to the prices and quality of service determined by the CFE”.

Beyond the specific implications of the warrant, which was not announced by López Obrador, as if he had wanted to take a prudent distance given the visit this week to the National Palace by John Kerry, US envoy for the climate agenda and manager of the interests of the companies in his country affected by this renationalization of electrical energy, the truth is that it is a policy as papist as he himself, even if it has been signed by the Secretary of Energy, and consistent with the López Obrador agenda that shamelessly stones the State of law.

Because whether or not what the warrant dictates is applied, the damage is done. Once again, Mexico has made it clear to investment, national but above all foreign, that nothing that exists today on paper in contractual terms is valid for this government. That if they know how to count, expect that any day now their contracts, especially those involving the energy sector, can turn into paper, and that if they want the right to kick, they line up, a line in which there are also Needless to say, the Americans, with Ambassador Ken Salazar as appointment manager, have been going to the National Palace almost every week to try to shield their businesses in Mexico for months.

Those negotiations in López Obrador’s office are also a symbol of something that The Wall Street Journal punctually reviewed last Sunday. The New York newspaper reviewed the series of attacks that AMLO has undertaken against the private sector, particularly energy, and how this could affect a business scheme that gave the country growth for decades.

The subtext of the report is easy to spot. Mexico has entered into a dynamic that not only dismantles part of the conditions that gave it stability, but also breaks the guiding principle of both the old Free Trade Agreement (FTA) or the new TMEC, whose final negotiations, by the way, were carried out by the team by Andres Manuel.

That guiding principle is trust, the trust that Mexico was a serious partner, an actor whose problems would not outweigh its willingness to respect the law and the agreements.

As different analysts have said for years, the main virtue of the FTA, which entered into force in the calamitous 1994, was that Mexico would implement policies to advance and consolidate a legal framework, and a legal administration, that would give certainty to all actors who would like to do business in the country.

In such a way that it was always an act of politics, an offer that governments would make changes in competition and regulation laws, adopt and respect the best practices in terms of free enterprise and fairness before the law, and would have a robust system that shielded entrepreneurs from the vagaries of rulers and six-year changes.

If Andrés Manuel found corruption in some concessions or contracts –something that would not surprise anyone, by the way-, if he does not see an obligation to honor spurious or leonine contracts –something that people support, of course–, he has multiple mechanisms and even today a bulging power to cause such things to be remedied or reversed. And it can be pointed out that in many concessions – highways, prisons, gas pipelines… – he has achieved it.

However, since the beginning of 2022 he seems to have won the rush given that the six-year term enters the final stretch. We are in the year, now it is evident, in which he will modify without care and without caring that his actions could be regressive, any contractual condition that he has that affects or does not privilege the CFE, particularly.

Ken Salazar can say that with his daily visits to the National Palace he has managed to rescue part of what was lost for the economic interests of companies in his country. This implies that thanks to the fact that the ambassador has the sympathy of the president, he has been able to defend his country’s agenda. But it also implies that we are dealing with a scheme that depends on the empathy between two people, the president and the emissary from Washington, and not on agreements that transcend humor or situation.

Other countries, on the other hand, are not hesitant to say in the corridors that with the unilateral changes in conditions, with the return of the unilateralism of the strong man in the Palace, Mexico can do it once, but that the next time the Mexicans want to sit at the business tables of the big ones, they will make you feel that there is no chair for those who do not respect the agreed rules.

But among the trading partners, with none had progressed as much in decades as with those of North America, and of them the most important is Uncle Sam, who now week after week is given ceilings while support is demanded. And the old adage warned that things cannot be done.

There will be costs for the country, because call it the Summit of the Americas or the collaboration in law enforcement that the FGR has the luxury of conditioning on a whim, the migratory issue or legal certainty.