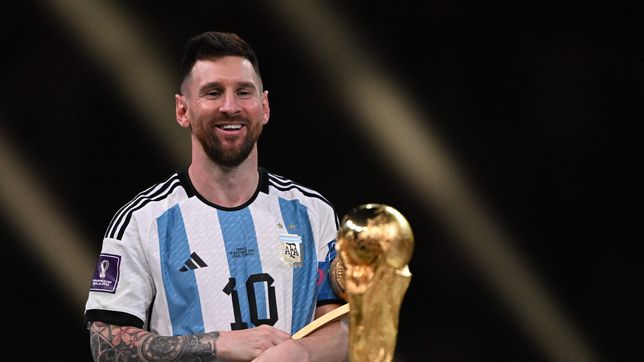 The conquest of the World Cup filled the Argentine people with happiness, but also with anguish to many fans, who fear that the Qatar 2022 final against France was Leo Messi’s last game in a World Cup.

The Albiceleste captain warned him before the decisive match against the French team. “The final is my last game in a World Cup. There are many years for the next one and I don’t think it will give me. Finishing like this is the best, ”he told Olé. As soon as he raised the cup, he made it clear that, for now, he would continue with the national team: “I love football, what I do. I enjoy being in the national team, the group, I want to continue living a few more games being world champion ”.

The coach of the Albiceleste, Lionel Scaloni, does not stop making force with his statements so that Messi extends his career in the national team and does not lose hope that this will happen. “Messi should have a place in the next World Cup, we want him to continue. If he wants to continue playing, the 10 will always be ready for Lionel ”, he declared after winning the final in Qatar. And this week he insisted on the same line in statements to TN: “Having him is a luxury, let’s hope it wasn’t his last World Cup. The 10 must be saved for when he decides. If he comes to define that no, we’ll see, but we will always have that hope ”.

Messi’s future with Argentina only he knows. It will be Leo who decides when to stop, but if he extends his career in the national team until the Copa América 2024, he will have a fabulous challenge before him, perhaps the last great challenge of his career. In all of history, no team had linked the Copa América and World Cup titles until Argentina did..

In 2023, Messi and his teammates would have the opportunity to extend the legend and complete the treble. Winning the Copa América (2021), the World Cup (2022) and the Copa América (2024) would place the Albiceleste in a historical dimension unknown until now in South American football and very difficult for his rivals to match in the future. In Europe, Spain did it in 2008 (European Cup), 2010 (World Cup) and 2012 (European Cup). The difficulty is maximum and the challenge extraordinary. So much so that perhaps it will serve as motivation for Messi to extend his career with the Albiceleste and try this last challenge.

This would only lengthen the legend of Messi, who left Qatar, as well as with the World Cup in his hands, with several individual brands. The Albiceleste captain surpassed the record of the German Lothar Matthäus and with 26 games he is already the player with the most games played in the history of the World Cups. He is the youngest footballer to participate in five World Cups, the first to give assists in five World Cups and the first Argentine to score in four (2006, 2014, 2018 and 2022). In three editions Diego Maradona (1982, 1986 and 1994) and Gabriel Batistuta (1994, 1998 and 2002) had done it. In addition, he surpassed, with 13 goals, Batistuta’s record as the top Argentine scorer in the World Cups.

Previous The mechanism of an infamy: Sam Bankman-Fried’s ex-girlfriend now tells her truth about FTX
Next Get Death Stranding free on the Epic Games Store for 24 hours