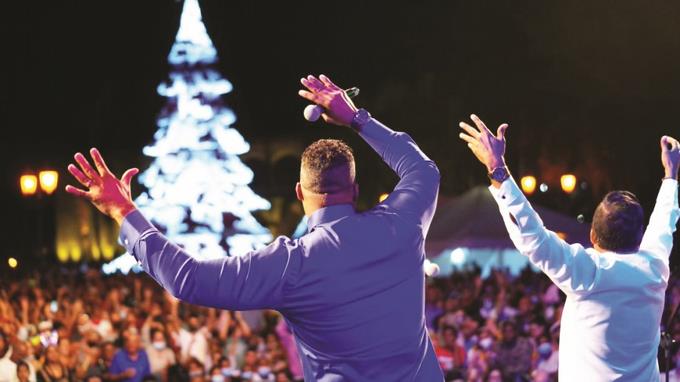 Merengueros raise their arms so that the harvest at Christmas is abundant, as it paints

For Dominicans there is no Christmas without merengue. It is already a tradition of many years that in the country the festivities of the time are celebrated with the musical genre par excellence, especially with its themes alluding to these days. Only the Covid-19 pandemic managed to break that holiday for a year.

So, after the coronavirus crisis has passed and the entertainment business has been restored, the merengue orchestras are preparing at the end of 2022 for one of the best Christmas harvests.

Expectations are very high when it comes to private activities. Some groups consulted already confirm between 30 and 40 party contracts for the month of December. This even without being informed, by the government, about the celebrations of the time for the entities of the State.

“This will be a very good Christmas for the merengue orchestras. Many have had a good year, with many parties and good tours. There are already merengue groups that have confirmed more than 35 parties for December and that’s not counting the parties of public institutions, which the government, apparently, has not yet given the green light for their execution, “said businessman Ramsés Peralta.

As an event producer, Ramsés also already has a few activities under contract for private companies that request his services for Christmas party staging.

The merengue groups are preparing to make their “August” in December based on the cost of their hiring, the money they generate is a lot in the last month of the year. For example, premium orchestras such as Los Hermanos Rosario, Héctor Acosta, Sergio Vargas, Toño Rosario, and Eddy Herrera, among others, sell between 800 thousand and 1 million pesos per party.

“The vast majority of groups charge for activity at Christmas from 500 thousand pesos onwards, the one that charges the least would be between 400 thousand pesos and they are very few, but the premium ones cost up to 1 million pesos like Héctor’s Acosta, I recently asked for your quote for an activity,” Ramsés Peralta told Listín Diario.

“The queen of merengue”, Milly Quezada, who has songs that have become symbols of Christmas such as “Juanita returned”, “La aguacherna” and “Rumba was formed”, has counted more than twenty activities for December , both in the country and in Panama and Puerto Rico.

“Really this Christmas will be very busy, and for all merengueros there are very good expectations. This time Milly has been more selective for the activities and she does not want to get involved as much as in previous years”, confided Josefina Frómeta, the artist’s road manager.

Since his departure with his own orchestra, in the 90s, Kinito Méndez has been one of the most sought-after merengue players. Not only at Christmas, the “Merengue Man” has a good work rhythm throughout the year both in the Dominican Republic and abroad.

Kinito is currently on tour in New York and when speaking with reporters from this newspaper, he assured that he already has between 40 and 45 activities on the agenda for December.

“The expectations for the month of December are good, I think it will be a tasty season for meringue and meringue makers. As for how many activities we are going to entertain, I could not tell you how many there are going to be, but it almost always ranges between 40 or 45 activities. We hope to reach 50 parties this season,” the merenguero responded to Listín Diario by telephone from New York.

The Rosario Brothers are among the elite orchestras in the merengue business. They are characterized by exhibiting an excellent sound, image and musical proposal. Sometimes they have been named as “The Dominican Rolling Stone”.

With a career spanning more than 45 years, they have one of the largest merengue repertoires, so their activities for this December range from weddings and private company parties. With contracts since the beginning of the year, Los Rosario already have 40 parties guaranteed for December.

“We (Los Rosario) started making reservations for December six months ago, we have even had reservations made since January,” confesses his manager René Solís.

Then he added: “We have the “plus” and that is that it is an orchestra that old people and young people like. This year there are very good chances of a good December for merengue. This year Los Rosario are going to exceed 40 parties this Christmas”.

These days Eddy Herrera is on vacation in Paris, France, with his wife Martha, who is also his manager. When talking to this newspaper “El galán del merengue” he said he was very happy with the harvest of work that is approaching this last month of the year, in which he already has projected between 35 and 40 parties.

“Yes, due to the prospects that we have, we are sure that it will be a great end of the year for merengue,” he stated from Paris.

This is the second Christmas that Jandy Ventura will have to assume the Christmas legacy left by his father, “The Horse”, Johnny Ventura. Although he preferred to be reserved with the number of parties that he will play next December, he said that a lot of work awaits him, which means a great commitment for him, not only as an artist, but because after Ventura’s death he has had to assume, with honour, carrying on the merengue legacy of his father.

“So far I don’t have the exact number, but I also don’t like to brag about it until after Christmas.”

At the level of private contracts, Rubby Pérez has no complaints about the activities that are already around his office, but he understands that the strength of the musical groups is in the dynamism that the state prints at Christmas.

“Private activities always work well. Now the business is revitalized at all levels if the government of Luis Abinader allows the popular festivals to be restored this year, “explained” The highest voice of merengue “.

In this sense, businessman Ramsés Peralta hopes that the state can boost the entertainment business with Christmas parties held by public institutions and popular festivals.

“We are going to hope that the government is condescending to the artistic class and reactivates the popular festivals in December, which are held in each town. This stimulates the business because not only orchestras work here because there is a dynamic of a chain of informal workers who do well with these activities,” said Peralta.

Government holidays. “State festivities stimulate the entertainment business, because not only orchestras work here, since there is a dynamic of a chain of informal workers who do very well with these activities,” Ramsés Peralta stressed.

Previous Micro miniskirts are back: this is how Hailey Bieber and Vanessa Hudgens wear them
Next Electricity consumption falls 3.5% in September and chains two months down | Economy