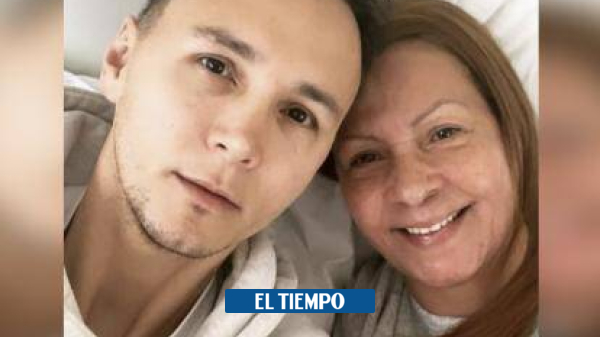 Mauricio Leal: what was not known about the death of the celebrity stylist – Investigative Unit

After a discreet and intimate ceremony, attended by only a few family members and closest friends, a provisional burial was given this Friday to Mauricio Leal Hernandez, 47, and his mother, Marleny Hernández Tabares, 67.

(We invite you to read: The double identity of the murdered woman near Titan Plaza)

Although their bodies were found last Monday, at 4:15 in the afternoon, in their luxurious property in 1,165 square meters at kilometer 6 of the road to La Calera, they spent almost four days in Forensic Medicine.

Leal and his mother were the managers of the prosperous hairdresser.

Forensic doctors and investigators of the CTI of the Prosecutor’s Office try to establish if the scene found in one of the rooms of the place it was a double homicide or the simultaneous suicide of the Leal Hernández (see box below).

There are two key clues to establish what really happened to the modest hairdresser from Cartago, Valle, who became a favorite of actors, queens, models, singers and members of the so-called local elite.

Before the funeral, investigators came to his reputed hairdresser, located on 81st street with 12th race, north of Bogotá, to interview people who had recent contact with the victims.

(You may be interested: They capture one of the most wanted drug lords in Germany at the Girardot farm)

Meanwhile, experts analyze whether there are traces of a different blood type than the A + of Mauricio and Marleny.

But blood type wasn’t the only thing they shared. She, born in Algeria, Valle, appeared as a deputy manager of the prosperous business that Mauricio registered, in February 2014, with an initial capital of 30 million pesos.

The hairdresser was also known as The Boy Genius.

What started as a beauty salon (Mauricio Leal Peluquería SA) also became, in 2016, an investment business in the construction sector; which led Leal to inject him with 100 million pesos more of capital.

And just three months ago he created a restaurant, adjacent to the headquarters of the hairdresser, baptized Maitoleal Cofee Lounge Bar.

(Also read: The businesses of the Chino who was carrying bags full of silver when he was killed).

A year ago, in the middle of the pandemic, the stylist acquired the house, in the Arboretto Bosque Residencial condominium, where he was found dead. According to deed 1266 of the Notary 25 of Bogotá, September 2020, to which EL TIEMPO had access, the domain transfer was made by way of housing leasing with Itaú Corpbanca Colombia SA

Neighbors of the condominium told this newspaper that, on paper, these houses are listed at about $ 2 billion on average.

This is the letter that was found next to the two bodies.

In his name, as the investigators have been able to establish, there is also an apartment in the La Cabrera neighborhood, that it acquired in June 2017 and that it registered in 260 million pesos.

(It may interest you: Bogotá on alert for the recruitment of foreigners for the local underworld)

The tracking of his properties is advancing because in the supposed ‘suicide letter’ that was found next to his body, he said: “I love you, forgive me, I can’t take it anymore. To my nephews and brother I leave everything, with all my love; forgive me, mom, 11.24 ”.

However, researchers seek to establish whether it is the stylist’s handwriting and, if so, whether it was written voluntarily.

The doubt that has aroused is that what is written there has very separate words and without continuity, which would indicate some kind of pressure when it comes to preparing it. Also, the paper was bloody and wrinkled.

We have observed with the family that some media are misrepresenting information, such as linking Jhonier to the case

EL TIEMPO contacted Leal’s attorney, Erika sanguinetti, who stated that neither his legal team nor the families of the victims understand how that letter was leaked.
“They are probative elements that only the Prosecutor’s Office should have under reserve; we are in the investigation stage, ”said the lawyer who dealt with Leal’s commercial aspects.

(We invite you to read: Mauricio Leal: ‘They are little angels’, a moving message from his brother Jhonier)

But now, Sanguinetti is representing Leal’s family, mainly to brother Jhonier, who found the corpses arranged in the double bed in the room his mother occupied.

“We have observed with the family that some media are misrepresenting information such as, for example, linking Jhonier to the case “, the lawyer assured this newspaper.

Investigators told EL TIEMPO that other information is being collected because the murder hypothesis is gaining strength.

(It may be of interest to you: Violent band of thieves that lashes La Calera stole Antonina Canal).

Attorney Sanguinetti said that Leal had the opening of a new store in Cajicá ready, and he himself had told in networks that he aspired to open another in Cartagena.

Also, I was fine-tuning details to be one of the stars in the Miss Universe pageant, behavior that does not appear to be potentially suicidal.

So they are dusting off some dull episodes of the brilliant hairdresser who was called ‘The boy genius’. He himself said that he had been the victim of two scams, one of them by an accountant that he had access to his finances and bank movements.

The episode with the mob

Leal was associated with Miguel Rodriguez’s daughter-in-law and ended up on the Clinton List.

He also related, without much detail, an episode that led to his listing on the Clinton List for being allegedly linked to a mafia clan.

EL TIEMPO spoke with someone close to the case and said that at that time, 2006, Leal was associated with a model from Cali, his client, for an undertaking.

They founded Incommerce SA, which ended up in the network of companies linked to the brothers Miguel and Gilberto Rodríguez Orejuela, then bosses of the cali cartel.
This newspaper established that Leal’s partner turned out to be the wife of Juan Miguel Rodríguez Arbeláez, son of Miguel and linked to soccer.

(It may be of your interest: The plays of the Rodríguez Orejuela to revive the 8,000 process)

After clarifying everything, the model left the Clinton List, in 2008, while Mauricio Leal and Juan Miguel they had to wait until 2014 to be removed.

Apparently, her ex-partner learned of Leal’s death in Argentina, where she went to live with her husband.

Success is the sum of small efforts that you make every day to be better than yesterday.

“Success is the sum of small efforts that you make every day to be better than aye.r ”. This was the last message Leal posted on social media the same day he was killed.

And a month before he had confessed to his followers that one of the lessons that the pandemic left him “is that every day you have to be a better human being because life is definitely leaving at any moment”.

He also said that you had to be careful and distrust because there were bad people, but that he considered himself a happy man.

(Also: Fanny Lu publishes the video that she would launch with Mauricio Leal on his birthday).

The Prosecutor’s Office has already heard in a statement Both the driver who went to pick him up at his home in La Calera on the day of the events, and the trusted employee whom, they say, he asked not to go to work that day.

Through your attorneys, Mauricio Leal’s family prepares a statement where he will fix his position on the tragedy that shakes them and their friends. And the authorities will reveal the first advances of the investigation in the next days.

What do the authorities say?

Through the colonel Simon Eduardo Cornejo, spokesperson delegated by the Sabana Norte Police for this case, the Police explained that there are strong indications that Marleny Hernández Tabares was murdered.

The officer added that investigations are now focused on determining whether Leal’s death was a suicide or a homicide. In addition, the businessman’s injuries are being investigated, including some apparent scratches, which could determine if a fight occurred in the middle of the events. The condominium security cameras are also key elements in this investigation.

A letter, key to clarify the death of the stylist Mauricio Leal

Previous Canelo Álvarez, to wait: Makabu will expose title to Mchunu
Next How was the first meeting between Ninel Conde and her son Emmanuel after almost two years of being apart? Celebs NNDC | SHOWS