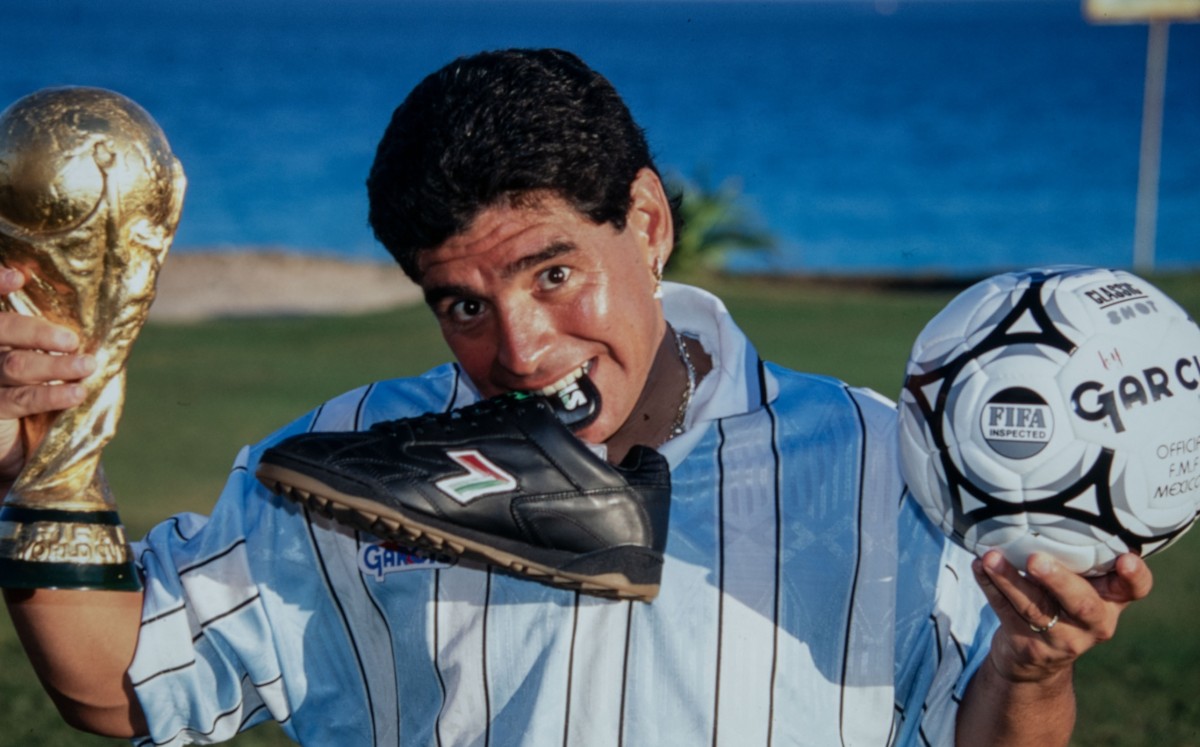 Since 1982, on and off the courts, Diego Armando Maradona was faithful to the brand Cougarwith which prior to the Spain World Cup signed a ‘lifetime’ endorsement deal.

Despite the loyalty that the Argentine ’10’ showed to the German firm for almost 40 years, in the early 1990s he became the image of a Mexican sporting goods brand, founded in 1961 and which was for several years the manufacturer of balls for soccer games First divisionas well as the supplier of uniforms of the Mexican team for the 1999 Confederations Cup.

A shell in Barça Stadiuma barbecue and a party that lasted until 4 in the morning served to José Antonio García, owner of Garcis, convinced Diego to put his name on a soccer shoe model; then, the Mexican company already had ‘tacos’ with the names of Hugo Sanchez, Jorge Campos, Carlos Reinoso, Manuel Negreteamong others.

“I invited him to a shell and then a barbecue, he told me: of course, Garcia, of course,” José Antonio had met Diego a few days before when they met in the premier class of a Buenos Aires-Mexico flight, where they shared cigars and a champagne bottle. It was 1993, a year before the USA World Cup.

“Romano was there, Mohamed was there, Javier Alarcón, Saúl Lisazo; I invited a lot of people. We were in the stadium waiting and suddenly it goes down. We all laughed our asses off, went into the dressing room and some of us put on the white uniforms and others the azulgrana. We went out, we had the barbecue and I invited him to my house. We brought a mariachi and we stayed until three or four in the morning. We throw a good party.”

During the party, García talked with Maradona about the intention of making a shoe with his name. Without much negotiation and opposition, Diego accepted the proposal in exchange for 150 thousand dollars, two private jet flights to Cuba and a stay in Cancuna city that served as a setting to take the images, which later appeared in the Garcis boxes.

“He’s a nice guy and nice. I wanted to take out a Diego Armando Maradona shoe, we talked about it and he told me that we would do it ‘but on one condition’, he told me. ‘Tomorrow you give me the money and you are going to take my photos in Cancun. I am going to Cuba, you send me a private plane, they pick me up, we take the photos in Cancun, I am there for two or three days and I return to Cuba”, was the request of the Argentine, whom García described as “humble, simple, witty, charismatic I had everything. A guy”.

One year after USA World Cup 1994 and with Argentina as monarch of the America’s Cup 1993, everything pointed to the Diego Armando Maradona de Garcis model being a bestseller; However, it was not.

Expectations were not met in Mexico, and although there was a better response in the United States “It was not what I would have expected”revealed Garcia, for whom “People preferred a Manuel Negrete model, Carlos Reinoso. What’s more, the Jorge Campos model didn’t sell either, Hugo Sánchez didn’t either. The one that sold the most was that of Carlos Reinoso”.

From this approach, García formed a friendship with Diego Armando, visiting him on several occasions in Argentina, and even inviting him to sign with Atlantea club he owned from 1987 to 2014.

“We made a good friendship. I invited him to play for Atlante and he said yes. We were in Argentina with Coppola (Maradona’s agent), we had dinner, we went to a disco. We met two or three more times. I spoke with him on the phone and in a game against Pumas we were going to eat here, but at the mere hour it was no longer done. I only spoke to him on the phone.”