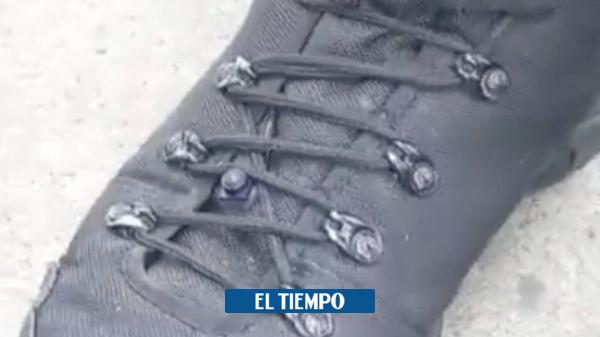 In social networks, the complaint of a woman who assured that a man was using a camera in his shoe to record from underneath the women who were traveling in TransMilenio became known.

She said that her friend became a victim of the alleged voyeur, since she was wearing a dress.

(You can read: This is the drama of harassment and threats suffered by ‘the sexiest woman in the world’).

Diana Villada, who was in the company of the victim, Angélica Narváez, told EL TIEMPO that both boarded TransMilenio at the Universidades station, each one for a different direction.

The alleged stalker said the camera was for his safety because he had recently been robbed.

“The guy climbed in next to her. My friend was made in the wheelchair space. The man stood behind her, not too close. At one point, the bus braked hard and the guy sent his foot to where she was, between her legs. There he realized that he had a camera on her foot and that he was recording her under her dress”, narrated Villada.

Realizing, The young woman alerted her surroundings, so the man got out of the bus and tried to flee at a station on 26th Street.

(You may be interested: National Institute of the Deaf must create a protocol for complaints of harassment).

With the help of a police assistant, they managed to arrest the man, who after being searched, a tiny black camera was found, very well conditioned in his right shoe.

“They could not find where he recorded the videos. Apparently the device has a memory or, the Police said, it sent the video material directly to the Internet CloudVillada pointed out.

For his part, the alleged stalker said in the video posted on the complainant’s Twitter account that he had been the victim of a robbery in recent days, which is why he would have carried the camera in his shoe.

(We recommend you read: On video: he would have harassed a young man in the Medellin Metro and they almost lynched him).

According to Daniela Villada, “it’s not the first time it’s happened to us, especially on that journey.”

It also revealed that while the man has no criminal record, He will be formally denounced with the video evidence and photos that they managed to take with the support of the Police auxiliary.

– Hassam responds when he will return to comedy on Colombian television

– Alejandra Azcárate denounces theft of her Instagram: “Rats, they intended to scam”

– Man destroys his van with shovels after being stopped by traffic