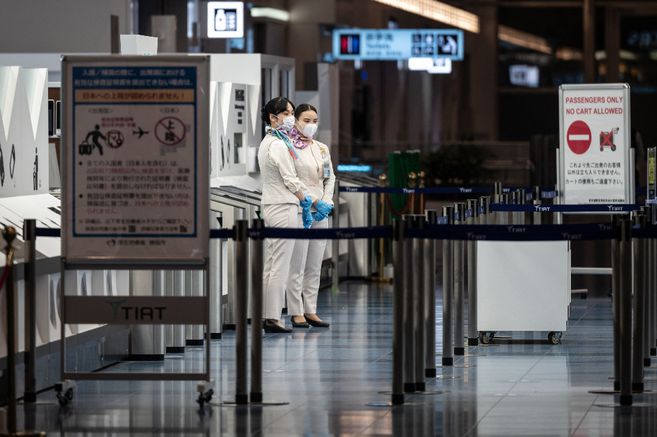 Japan, Australia and other countries that impose travel restrictions by omicron variant

The government of Japan suspended the entry of foreign travelers to contain the omicron variant of the coronavirus. More countries impose restrictions.

Although several scientists are explaining that the omicron variant of COVID-19 does not seem to be more aggressive and that the vaccines that have been applied around the world against the virus should provide protection against the new variants, the appearance of cases of the new strain in several countries they set off alarms.

Several countries have imposed travel restrictions and many more have reversed the reopening of borders they had started.

This Monday, Japan announced the closure of its borders to all foreign visitors to stop the omicron variant of COVID-19. Japan was the last country to re-implement strict border controls, something many considered a thing of the past, by preventing the arrival of foreigners.

You may be interested in: Ómicron, a variant of concern, according to the WHO

“We are going to ban the (new) entry of foreigners from around the world from November 30,” Japanese Prime Minister Fumio Kishida told reporters.

The Philippines also announced that it would temporarily suspend its plans to allow the entry of tourists with full vaccination to prevent the spread of the new variant.

Israel announced some of the toughest restrictions, including the closure of borders to all foreigners, four weeks after reopening for tourists. “We are raising the red flag,” said Israeli Prime Minister Naftali Bennett.

For its part, the Australian government suspended its plans to reopen its borders to certain workers and students, due to the concern raised by the new omicron variant of the coronavirus. Prime Minister Scott Morrison said that finally the borders will not reopen on December 1 as planned and He explained that this delay was a “temporary and necessary decision.”

You may be interested in: What is known about the omicron variant of the coronavirus

On United Kingdom, which has registered several cases of the new variant, the Secretary of Health, Sajid Javid, said that on Tuesday new sanitary rules come into force, including the use of masks in shops and public transport, as well as more restrictions on passengers arriving from the Exterior. This country prohibits the entry of people from six countries in Africa.

Is the new variant more dangerous?

Despite the restrictions that many countries rushed to reinstate last week, the new variant managed to evade controls and has appeared in numerous countries, including Canada, the Netherlands, the United Kingdom, Botswana, Hong Kong and Australia.

👀🌎📄 Are you already aware of the latest news in the world? We invite you to see them at El Espectador.

Scientists are trying to determine the threat level of the new variant, but according to a South African doctor, after reviewing dozens of her patients suspected of carrying the omicron variant, the symptoms they found were mild, such as fatigue.

Angelique Coetzee, president of the South African Medical Association, told AFP that she saw 30 patients in the last 10 days who tested positive for COVID-19 and they recovered without hospitalization.

The White House adviser on the pandemic, Anthony Fauci, said he continues to “believe that existing vaccines must provide a degree of protection against severe cases of covid ”..

Ómicron, initially detected in southern Africa, posed a new challenge to the global effort to combat the pandemic. “We know we are in a race against time,” said the head of the European Commission, Ursula von der Leyen, adding that vaccine manufacturers need two to three weeks “to have a complete picture of the quality of mutations.” .

You may be interested in: The threat continues: coronavirus could cause 700,000 more deaths in Europe

In turn, the head of the World Health Organization (WHO) in Africa urged countries to follow the science instead of imposing flight restrictions to contain the new variant.

“With the omicron variant detected in various regions of the world, applying travel restrictions for Africa is an attack on global solidarity,” said WHO regional director Matshidiso Moeti.

Scientists in South Africa last week unveiled the new variant with many more mutations than the beta or delta variants, the latter affecting the global economic recovery and sending millions of people into lockdown.

The Bambino Gesu hospital in Rome achieved the first “image” of the new variant and confirmed that it has more mutations than the delta, but that doesn’t mean it’s more dangerous, according to the researchers.

Previous Maite Perroni and Andrés Tovar showed off their love on social media: “Soulmates are not only lovers”
Next The adorable Eastward receives update 1.1.0c on Nintendo Switch with these news – Nintenderos