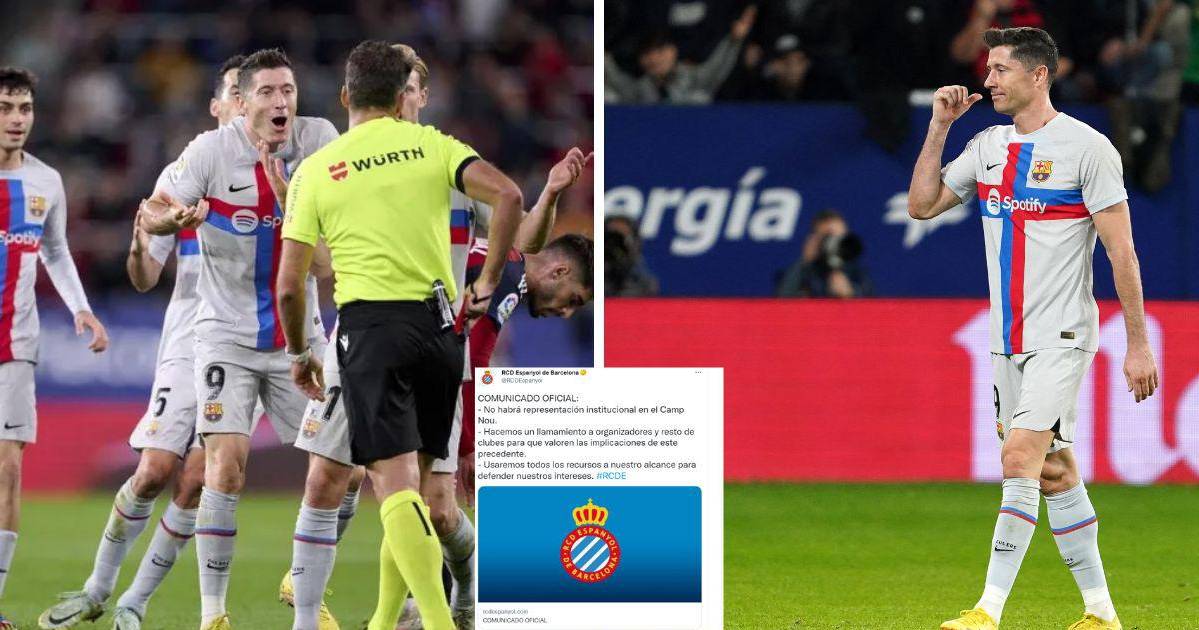 “It is an unprecedented injustice”

The RCD Espanyol He has come out of the precautionary step to the striker, Robert Lewandowskibecause he will be able to play the derby with FC Barcelona this Saturday and lamenting that “it totally conditions the day” and they brand it as an “injustice”, taking into account that the Pole was sent off in the last match of League against Osasuna.

Lewandowski He will play again with Barca without having served a single penalty game so far. This is the full statement from Espanyol:

SEE: Valladolid vs. Real Madrid: Time, lineups and transmission channel of this match for La Liga in Spain

”RCD Espanyol de Barcelona finds it unusual that, 24 hours after the match against FC Barcelona, ​​and after ruling it out by different competent bodies (Competition, Appeal and TAD), a precautionary measure has been granted for a sanction previously imposed on the FC Barcelona player , Robert Lewandowski.

In this sense, as a party indirectly involved, we have only been able to access the Resolution after requesting it from different bodies and not because it has been communicated to us, as established by procedural regulations.

However, we believe that the requirements to justify the precautionary measure are not met. Specifically, the appearance of good law is not particularly defensible, with two sanctions of different types, three unfavorable administrative resolutions and an arbitration act with a presumption of veracity that endorse the sanction.

The Club considers that this last-minute decision completely conditions this day, which began yesterday Thursday, and the team’s preparation for this match. RCD Espanyol understands that it is a wrong and an injustice taking into account the precedents with other clubs.

It should be remembered that, throughout this season, Espanyol has encountered similar situations in which appeals have been filed for the expulsion of its players and in no case have they led to the corresponding committee meeting during the week to study the allegations presented by the club.

Despite this injustice and this unprecedented decision in the competition, tomorrow our TEAM will compete 110% to correspond to the trust of our people”.

READ: The best statues of sports legends; the most impressive are those of Pelé, Maradona, Messi and Cristiano

NO EXECUTIVE WILL GO TO THE CAMP NOU

The RCD Espanyol has confirmed that there will be no manager in the box in the Barça-Espanyol derby this Saturday.

“Given the injustice and grievance that in our assessment represents the decision of the Central Contentious Court of Madrid 24 hours after a match and, taking into account the dangerous precedent for the fairness of the competition that this route and this decision represents, the Club has decided not to have institutional representation of RCD Espanyol in the league match to be played tomorrow at the Spotify Camp Nou”, says the statement issued by Espanyol this Friday.

Previous a retiree designs a connecting rod that increases performance
Next Oppenheimer, Barbie, Napoleon and more