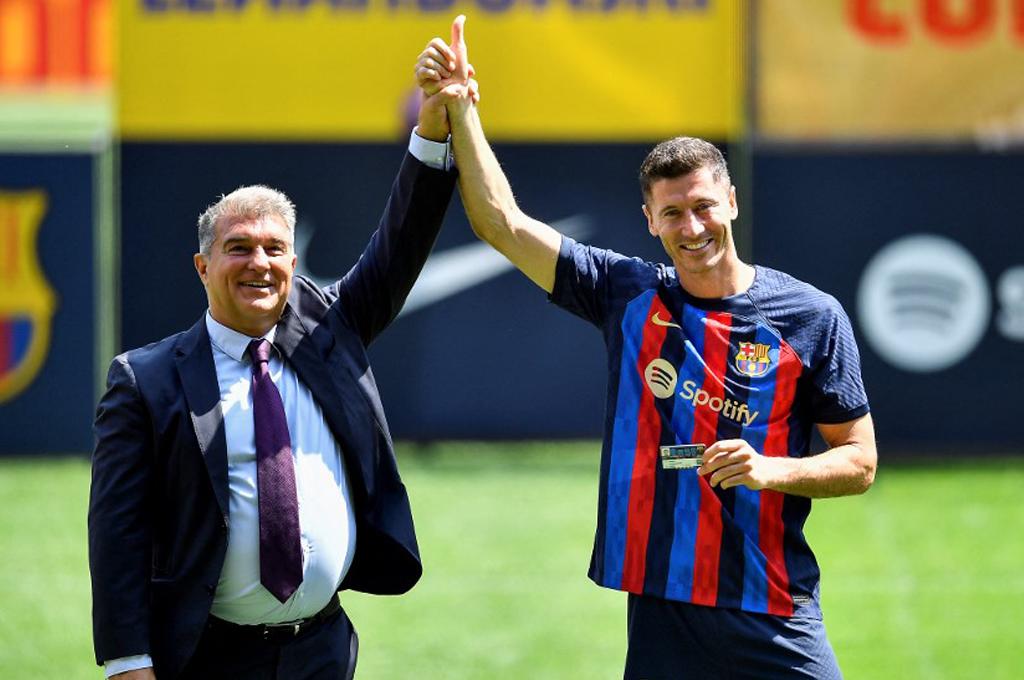 Joan Laporta trusts in being able to register all the signings and meet the demands of LaLiga. During the presentation of Lewandowski at Camp Nouthe president of Barcelona boasted of the operations completed in recent weeks and ensures that they have entered, so far, the amount of €868 million.

The president also tells how the signing of the Polish striker was managed and the reason why they took away the number ‘9’ from memphis depay to give it to your new star.

Laporta opens the doors for Messi to return to Barcelona

”Good morning to all. It is a historic day. We have been able to verify it in the presentation. It is one of those days in which the Catalans feel the club more than ever. It is a sign that Barça is more than a club. Thanks for the effort to come. It was not easy, but we have achieved it. Starting with you, going through your agent (Pini Zahavi), Mateu Alemany, Jordi Cruyff… Also the efforts from the board. We have all been waiting for your incorporation because we knew it was special. You have the gift of scoring. You are serious, with charisma, elegant and respectful. You earn people’s respect. I think this is proof that we are in a new stage, a splendid one for Barça. We are very proud to have you here.”

”I think he will feel rewarded throughout his stay at the club. We have already seen the enthusiasm he generates. We have great respect for Bayern and for all football clubs.”

The signing of Lewandowski

“We had the intention of signing a ‘9’ scorer. If a genius comes and grants us three wishes, it would have been for him to be a scorer, a golden boot several times and a goal guarantee. That’s Lewandowski. What happened? That I have a very special relationship with his agent (Pini Zahavi). I told him: ‘hey, is there a possibility?’ And he told me yes, that he would like it. We immediately contacted Bayern. I think Mateu did an extraordinary job talking to the people at Bayern. Working as Mateu works, with great efficiency, with discretion. Meeting in various places. When we saw that Bayern had the predisposition, it was a question of quantities. There Mateu moves like a fish in water. He works with someone very skilled, like Jordi Cruyff. There were several video calls. Robert was also wondering if we could sign him up. I gave them comfort. We told them that if we could only enroll one, it would be him. There were other clubs that offered him more money. For that I am happy and grateful. When they are willing to come in this situation. When they do it despite pressure from other clubs… Barça have made a great effort and have been rewarded thanks to the will of Robert and his agent”.

”It was a club decision. For reasons that interest the club, for image, for publicity. We thought it was an appropriate decision. Utmost respect to Memphis.”

The relationship with Bayern

”From my point of view, it’s good. Alemany has closed this agreement with consensus. We respect them very much. My relationship with them is good and always will be because we respect them”.

Financial situation of the entity

”We have worked to enroll them all. We have worked hard and well, in order to meet the requirements. And if it is necessary to do any more operations, we will do it. We’re waiting. It is a decision that the League must make. We have fulfilled what you require. We are confident that we will be able to enroll them.”

Activate the fourth lever, the sale of the other 25% of Barça Studios

“The fourth is planned. Barça has entered 868 million euros in these two months. We have a healthy balance sheet and the income statement as well. We have made a great effort. We have activated asset operations. We have the option to recover these assets. We are turning that situation around. We have left the hospital and we are getting healthier. I am very satisfied”.

Today marks a year without Messi

”Today is a historic day for Barça. We are all proud that a player of his category wanted to come. It indicates that we are on a good line. In my first stage, they wanted to come and play here. At that time it was easier to come because we had a constellation of players. That is why I value so much that those who have come have come. I see in the market that there is a great desire to come here. Because of our history, because of the way we understand football, because of our game, because of the city, because of LaLiga… I think that in LaLiga, having players like Robert is very important. A year ago we had to announce an unwanted situation as a result of the club’s situation. A year has passed and we can say that we are turning that situation around. We have come out of the hospital and we are getting healthier.”

”We are making a great team. It is a very difficult year. We have had to make many important decisions. A lot of pressure, but we continue to withstand it well. We are satisfied with how everything is going. We continue working so that the club picks up that cruising speed. These presentations are very exciting. Ronaldinho, Maradona have been here… Maybe they’ve seen me more excited than expected, but I am.”