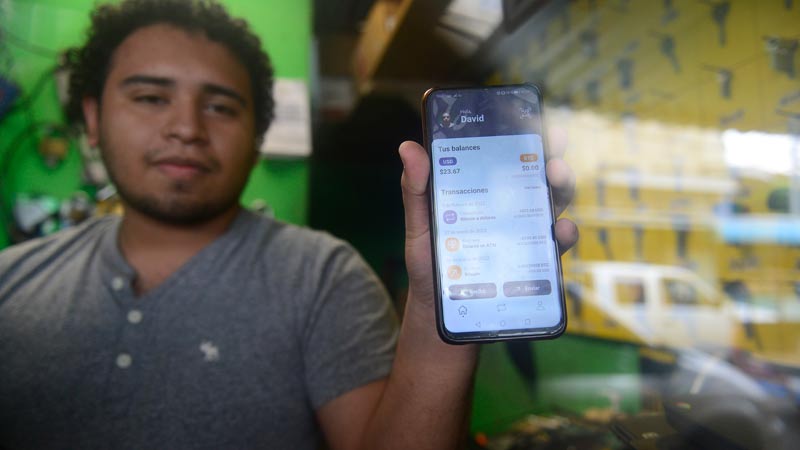 Some businesses in the center of San Salvador have stopped doing transactions with this cryptocurrency as its value also falls internationally.

One year after the announcement and approval of the Bitcoin Law, many of the businesses in downtown San Salvador have removed the “Bitcoin Accepted” signs and their employees confirm a downward trend in transactions.

“Now I no longer receive payments in Bitcoin, what’s more, people don’t even ask about it anymore, the truth is it’s not profitable,” says Milton Alexander, owner of Foto Flores in Plaza Libertad.

Although he assures that at the beginning there were quite a few people who came to pay with this cryptocurrency, he never dared to invest. “We only charge because people wanted to spend what the government had given them, we received the money and converted it into dollars and then I paid for gasoline and purchases from the supermarket and that’s what we spent it on,” he said.

Many businesses have removed the “Bitcoin Payment Accepted” signs and those who are encouraged to receive Bitcoin as a form of payment immediately convert it into dollars.

SEE: The six predictions that Bukele made about Bitcoin and that have not yet been fulfilled

In the Chivo electronic wallet, which the Nayib Bukele government launched for citizens to trade with Bitcoin, there is a function that allows this operation. They are obliged to receive the cryptocurrency, but not to store it.

This is the case of Mónica Díaz, who works in VICMARC electronics. “Perhaps throughout this year we have received one or two payments a month like this, but hardly anyone uses the Chivo Wallet anymore. We really keep charging in case someone comes, but there are really few people,” she said.

In the midst of the cryptocurrency market debacle, including Bitcoin, thousands of investors have been affected by the sudden loss of their funds due to the depreciation of this type of digital asset.

For Armando Alfaro, the experience with cryptocurrencies was not very pleasant. “What was the problem with that application. There were times when it didn’t even work, I had to have the money withheld because it couldn’t be taken out of the ATMs or the platform crashes. I no longer receive in Bitcoin, so if they want to buy me, let it be in dollars Armand said.

Despite the collapse of Bitcoin, Bukele asks if he should buy more

In recent weeks, the cryptocurrency market has had a downward trend, especially that of Bitcoin. This cryptocurrency reached $17,630, a value that reflects how far Bitcoin is from that all-time high it reached in November 2021, when it stood at $68,890 per unit.

Some merchants in the capital maintain the application but with a minimum balance, as is the case of Alexander, who assures that for several months no one has bought him with cryptocurrencies and, for his part, he has no money to invest in the platform.

Bitcoin is legal tender in El Salvador since September 7. The government has promoted it through the use of the Chivo Wallet, but since it was announced the same day the law came into force, the failures in the system and complaints from the population have been constant.

However, in this country where only 23% of the population has a bank account, many merchants have given up using it.