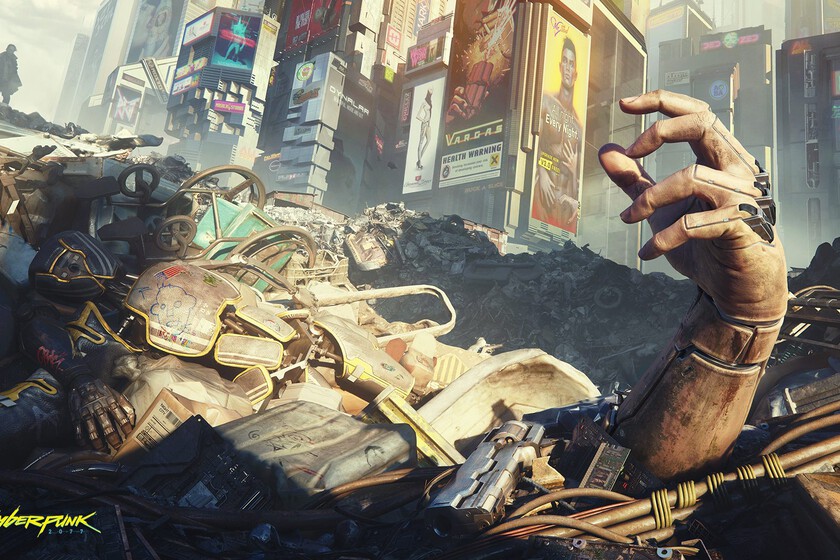 One always thinks that the future supposes the advancement of humanity, the pinnacle of society, a world in which we will all live together equally and with best technological advances at our service. At the very least there will be flying cars, everyday holograms and an economization of any daily routine. And that is what Cyberpunk 2077 puts me in front of me.

In the time I’ve played the play of CD Project RED, I have been able to see cars above my head, vending machines inside apartments and so many chips inserted into my body that offer me better features than the laptop from which I am writing these words. However, to all these mechanical marvels I forgot to add the most important factor: they are used by human beings.

After the first mission where Jackie joins me in rescuing a client undergoing a somewhat illegal transplant, it’s clear to me that the medicine is rotten. I imagine that the cancer will have been cured in cyberpunk 2077but access to cure is totally evil. You must choose between going to a clandestine workshop with the minimum health guarantees or leaving your entire salary in the Trauma Team premium policy.

Some real fools who land with a security perimeter, armed to the teeth and brainwashed enough to understand that a dying man should be left lying around if he can’t pay. Private health has taken everything, but the public is full of inept who can barely hold a scalpel. The commodification of health is absolutely deplorable. Faced with such a first shock, the title is not exactly going to step on the brake. Going up the elevator and walking around the apartment block where V lives I can tell, but the TV is the key. The silly box, and never better said. Currently the audiences are very low, the public goes to channels such as streaming to cover their leisure quota and in the game television is a dump.

It’s impossible to have fun watching such crap and I’ve been flipping channels for an hour. I already commented in the previous text that I am fascinated with the amount of detail that Night City offers, but this time the impact has been tremendous. A late night show whose name I don’t want to remember brings together a representative from Arasaka with a priest to discuss Relic.

A harmless experimental device that allows us to transfer the consciousness of whoever we want to our head via USB connection. I know that I am going to have a link with such a device, but it is a tool that is intended to be used for purely economic purposes. Exclusive access for a reduced elite and with the unapproachable ethical question of not keeping dead to those who have already left this world. In addition, the presenter is completely bought by the company by failing the priest in front of the entire audience and applauding thanks to Arasaka.

Search, compare and you will not find anything better

Artificial intelligence is the future in many fields and its use must be measured with caution. There’s a huge stretch from us using them for fun to review video games to replacing actual artists. Nobody seems to care about the matter, much less the Swedish Academy, since they have had no qualms about name an AI as the winner of the Nobel Prize. An aberration like I have rarely seen, honoring mathematics in literature and taking as a parameter whether it is an undisputed bestseller. From the impoverishment of art you can change to the dizzying publicity that bombards the city for 24 hours. It is excessive, always emphasizing the discount percentage of each product, how essential it is for your life and the questioning of how you could have survived without it until now.

A family as a promotional image that the second amendment is not just for the rich, with a pregnant woman holding a rifle. Water, the real one, is a luxury for which you have to pay 99 eurodollars. In the informative it is encouraged to insert the elderly in hibernation capsules instead of the expensive nursing homes on the outskirts. Food is no longer grown as before and is simply chosen to generate it in the laboratory. Aldous Huxley warned in Brave New World of the risks of how technology and progress could end what he defines us as humans, but what cyberpunk 2077 is a twisted vision of the pinnacle of humanity. A dirty shop window in which the world of sex is exhibited shamelessly, with sexual claims even in the soup. The truth is that it would deserve a separate article on how the Polish developer has dealt with this whole issue, but it’s not all bad. My pitiful car comes to me at the push of a button, Viktor Vektor improves my vision with some new money’s worth of eyes, and I can hack almost any device just by looking at it.

All these words are written from my external vision of the game, which amazes me because of its setting, but makes it clear to me that I don’t want to live that future. Like V, my rise to the top of a Corpo will happen and if I have to laugh in the face of a nutty prophet and kill mercilessly, I will.