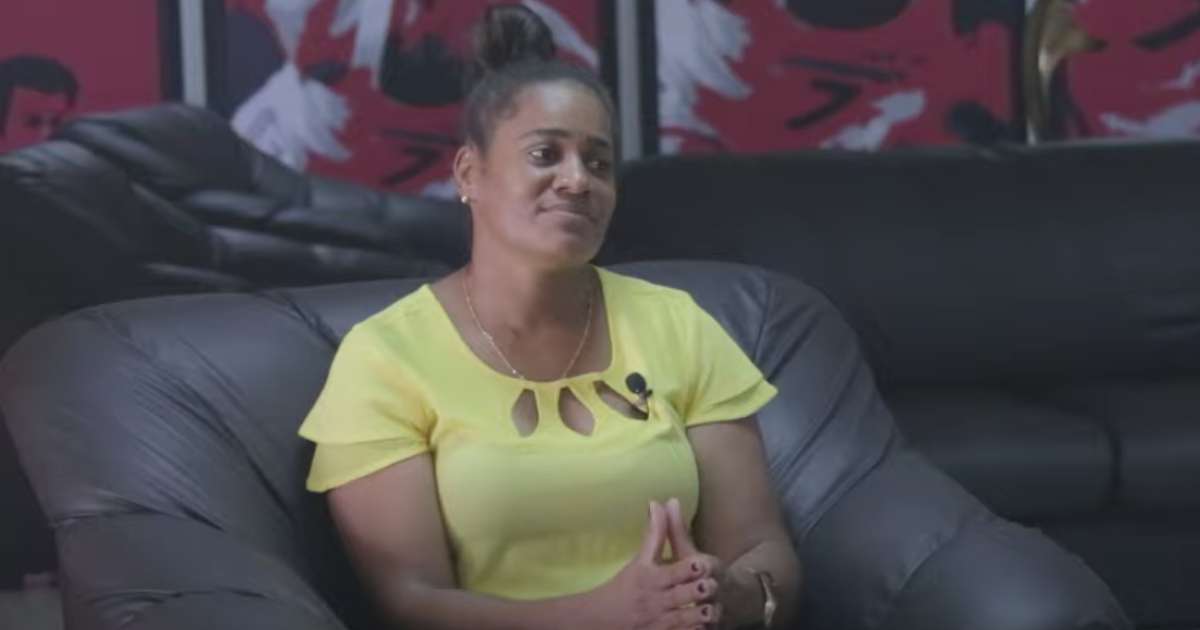 I have before me a woman who has been mercilessly attacked on social media in recent times. Many, many of my followers, friends and those who are not, ask me how I, the chronicler of Cuban athletics for four decades, have not spoken out about the current situation of our king sport, including the recently celebrated World Championship in Eugene, Oregon, and the role of the national commissioner.

To those who were worth it, I replied: “Until I talk to her I won’t write or say anything.” I knew for a fact that soon I would be able to offer my opinion, or at least hers.

This is the case! Here I have the Olympic champion, world tri-monarch and national commissioner from the end of 2018 until a few days ago, the Camagüey Yipsi Morenofor me the Fury of Agramonte.

And I confess that more than an interview it has been an open and frank dialogue.

Yipsi, you are in a delicate situation, in which everyone accuses you of being rude, of having made mistakes, of not accepting criteria, is that right? (His face darkens even more and he begins his walk through what has been his life for more than four years).

Despot… why? Because I know athletics inside out, its weaknesses, threats, strengths and opportunities. Rude? because I didn’t listen to those inside the house who expressed an opinion about me not being ready to assume the position, who said: “Who would think of putting that woman who in her life has only thrown the hammer?”

Despot and rude because that chair had never been occupied by a woman and not just any woman… but the woman who grew up in athletics from the age of 15 and knew her insides.

A woman who, modesty aside, also had to have intelligence in order to sneak in among the greats in her discipline with four laps, against the European stars.

Rude for a video that went against what was poorly done? Video manipulated and viralized by those who from athletics only intend to do their will, disrespect the regulations and initiate the bets of indiscipline and insubordination, lacking the moral principles of the Cuban sports movement.

Those who at the time felt like gods for “X” results, to whom I do not take away value, and only tried to impose their will, little vision and the least desire to leave their comfort zone.

Do you think your character has influenced the current situation?

Nope! I reiterate, the video that traveled the networks has NOT been my day to day; I am demanding because I demand myself. Why do my athletes approach me to tell me about their personal and family problems, more than sports ones?

Let’s see, mother, how have my evaluations been year after year, who has approached me to point out an error? I know how to listen despite what has been spread around that I am despotic and rude. You are my best example that I have always listened to you when you rectify something.

Let the first stand before me and list those big mistakes of which they accuse me, which I’m not saying I wasn’t wrong, but how do I rectify it if they don’t tell me? The best way to learn is to know what you are wrong about, rectify and carry out a better job.

I have a strong character, it’s true, just as it’s also true that I’ve been “wrapped” by each athlete, their situation, giving advice… everything within what I can do, what’s within my reach. I can’t stand what has been done wrong, perhaps what has been done wrong for a long time, ah! fight against that is bad? breaking the badly done, is it bad?

Bad work for maintaining a discipline and telling those who owed things as they are, demanding for their functions, demanding for their efforts, valuing their work, pointing out what was poorly done? Bad job when you have to get out from behind the desk and get into a problem even when it’s not yours; plan actions and look for solutions?

Bad job because I managed to give a facility like the battered Pan-American Stadium a place where you can feel good? Give value to the people and workers who are protagonists of each feat of our athletes; labor group that was forgotten for years. It cannot be forgotten that athletics as a sport is a game of analysis and strategy and many things have to do with its proper functioning.

I can’t go deeper, it’s not me who discovers the Mediterranean; the bad one is me When you only want to see the bad, when you underestimate what has been achieved, what is happening to me happens.

We went to this Worldl with the second smallest Cuban delegation to an event of this type, 14 athletes and an average age of 21 years 21 years! And yes, it is the first time that the podium is not reached. Our great hope was the triple jumper Lázaro Martínez who had beaten Pichardo twice but when Pedro Pablo Pichardo jumped those extraordinary 17 meters 98 centimeters in his first attempt, Lazarito put pressure on himself because he thought he would reach gold and he could not reach that distance and neither gold nor silver nor bronze.

The exodus of talents is attributed to me; discus thrower Yaimé Pérez was disappointed, there were problems with the delivery of their awards for three seasons. That doesn’t happen to me, I was worried but I don’t determine it.

Jordan Díaz, the triple jumper, could not improve his marks and look at the jumps he’s taking now Did I plan your workouts? I was simply an administrative manager.

Rosemary Almanza, the eighty-year-old, told me in 2019 that she wanted to train with another coach, which in that case was Francisco Ayala who was in El Salvador and I sent her to train in that country. With him she achieved her best mark, lowering the minute 57 seconds in the 800.

After the Olympic Games where she did not achieve that performance, she and Ayala suggested that I prepare with Nelson Gutiérrez who was in Ecuador and I managed to send her there. Tremendous preparation that unfortunately did not bear fruit due to her health problems that prevented her from reaching the final in the World Cup. Was I bad, rude and despotic in trying to help our best eight hundred-year-old?

No one talks about the historical moment that our sport is experiencing in terms of the exodus. Are representatives of athletics only those who have taken another course? The stampede of ballplayers, wrestlers, karate fighters, boxers, unconventional athletes (Paralympic) is it my fault too?

The exodus of athletes is easy to blame on me; the difficult thing is to answer how many things I put on the table regarding the subject: who pays the prizes and when?

The exodus of athletes is easy to blame on me; the difficult thing is to answer how many things I put on the table regarding the subject: who pays the prizes and when?

On the other hand, to what degree did the casualty rate decrease due to indiscipline that lacerated the youngest, preventing the development of their abilities by being out of high performance, especially in these times that the provincial ESPAS disappeared and to discharge them is to leave them out of a discipline daily.

Who gives solutions to the problems of demotivation and answers without arguments? Yipsi of course. Yipsi pays for the mistakes of those who do not analyze or seek her opinion as a directive or respect for the person in the process.

They blame it for the exodus of athletes because in a historical moment like today, in which we live on a day-to-day basis, young people, whether or not they are athletes, have been directly or indirectly attracted by means that did not exist before or were impossible to access. .

To this he adds that there is a lack of coaches with scientific training, tempered by the times in which they live, when sport is purely professional and is seen, in addition to entertainment, as a business. An example is that the sprinter Reinier Mena improved his times and the triple jumpers lead the specialty on the planet.

The matter is multifactorial. They do not see their results and those who have them fall apart because they do not give them what they earn, what was agreed with them. They are unmotivated, they feel pressure from all sides.

Yipsi, INDER offered two press releases: in one that you were released, that is, replaced; in the other, that you were the one who requested the release, which one is correct?

The second you tell me. Since May 10 I had requested my release and they told me to remain in office until the end of the cycle, which would have been fulfilled in the NACAC Championship [Asociación de Atletismo de Norte, Centroamérica y el Caribe]from August 19 to 21, in the Bahamas.

And it turns out that I came to find out about my substitution on television, surprisingly, when before they had not accepted my release. tell me your mother

How have the athletes reacted?

I can show you several messages that are on my mobile but I think it is not relevant, they may think that I justify it.

(Yipsi shows me his cell phone and, in fact, I see sincere messages of support for the Fury of Agramonte from several athletes and a coach. I always observed in my regular visits to the Pan American Stadium, in fact the only sports facility that attended for several years, the fraternity between Yipsi and the athletes).

So list the evils and enemies that I have in athletics. I’m not a cup of gold, I can’t be liked by everyone, but do you think I deserve all the insults they say about me?

I’m going to tell you something that very few know. The boys who went to the World Cup lost the last month of preparation, the most precious, because they had to return from Europe since in Spain we did not have access to visas from the United States. Of course, this represented a colossal delay because training in the Pan American Stadium is not the same as preparing and competing in the Old Continent.

Anticipating the visa situation with the United States, I had requested the process from INDER’s International Relations since March and they told me no, to do it in Spain. Tell me is it my fault too?

What does the Fury of Agramonte have ahead? (I confess that for the first time that night, Yipsi’s face was Yipsi’s face, the one with spontaneous laughter, bright eyes, full teeth)

Live, dear mother, live! It’s not that I haven’t done it until now, it’s not that I didn’t love my sport or what I wanted to do for it, but now, without pressure, live: take care of my son whom I often left behind for prioritizing my responsibilities, spending more time with my mother, with family, with friends.

It is a possibility that I do not rule out but now what I want is to detoxify myself from so much stress and so many disappointments; forgetting what it means to go from being a loved and respected person to another hated and despised is hard, very hard! But I know there is a future with my son, my mother, my husband Abdel. Whoever thinks he buried me alive… was wrong!