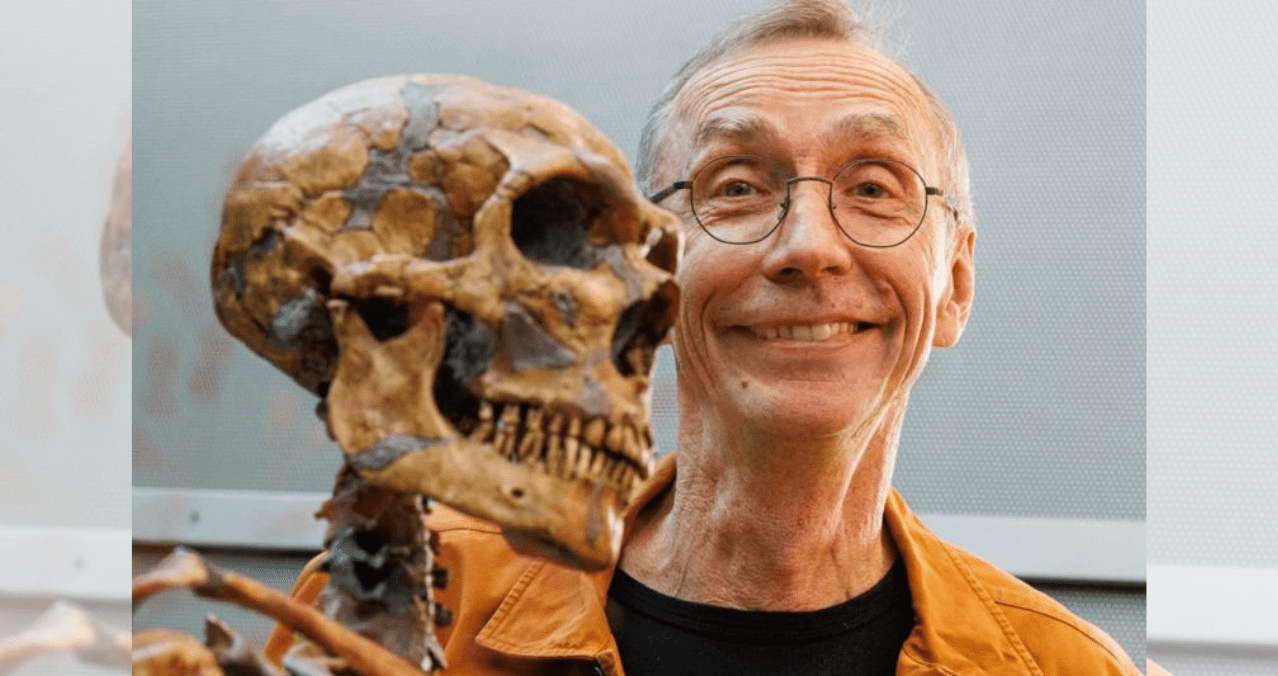 Without looking for it, he had created a new discipline in science: paleogenomics.

Svante Paabo poses this Monday with a replica of a Neanderthal skull at the Max Planck Institute in Leipzig. Photo: BBC/Getty

Imagine that all the pages of a dictionary had been destroyed in a paper shredder and that you had to rebuild the work.

Imagine that, in addition, the thousands of strips of paper from that dictionary were mixed with those of thousands of other books that were also shredded.

Add a cup of coffee to that mountain of shredded paper.

The result: a huge ball of paste that mixes millions of letters, tiny segments of a text that has become illegible, and confuses them within itself.

This is how the Swedish scientist Svante Pääbo described in the documentary First Peoples (“First Peoples”, on the American public television network, PBS) the difficulty that the reconstruction of Neanderthal DNA implied for him, or for anyone else, after dozens of years. thousands of years extinct.

“There is all sorts of DNA damage that can cause you to determine incorrect sequences, especially when you start with very few molecules, and there is human DNA contamination that is almost everywhere,” Pääbo wrote in a paper published in 1989.

But Pääbo and his team succeeded, and thanks to this he won the 2022 Nobel Prize in Medicine on Monday.

“Through his pioneering research, Svante Pääbo achieved the seemingly impossible: to sequence the genome of the Neanderthal, an extinct relative of modern humans,” the Nobel committee said in announcing its decision.

The key in ancient Egypt

To understand the process that led Pääbo, 67, to rebuild the Neanderthal genome, it is necessary to go back to his adolescence.

When he was 13 years old, his mother took him on vacation to Egypt.

There he became fascinated with the ancient culture of the country and archeology, so he returned convinced that he wanted to become an Egyptologist.

When it was time for him to start university, Pääbo entered Uppsala University, 70 kilometers northwest of Stockholm, and began a major in Egyptology.

However, after two years he realized that this was not what he aspired to in his life. The career was oriented towards the study of hieroglyphic grammar, and he had dreamed of discovering mummies and pyramids.

“It was not at all the romantic and Indiana Jones type that I thought,” Pääbo told the BBC a few years ago.

It was for this reason that he switched to medicine and later studied for a doctorate in molecular genetics, which led him to link his teenage interest with his professional field.

“I started to realize that we had all these technologies to clone DNA, but no one seemed to have applied it to archaeological remains, particularly Egyptian mummies,” Pääbo said in a profile of him published by the US National Academy of Sciences. .

In this way, he could have his own genomic time machine.

His concern led him to study the DNA of mummies and, a few years later, to move to California to do ancient DNA research at UC Berkeley.

He then continued his work in Munich, Germany, where he dedicated himself to mammoths and bears that lived in caves.

Despite the difficulties, not only did he not give up, but over time he set out to do something much more ambitious: decipher Neanderthal DNA and what differentiates it from current human beings.

Without looking for it, he had created a new discipline in science: paleogenomics.

Pääbo was hired in the late 1990s by the Max Planck Institute for Evolutionary Anthropology in Leipzig, Germany.

He had just come from working on the mitochondrial DNA of Neanderthals and there they offered him a qualitative leap: to investigate nuclear DNA.

“At the new institute, Pääbo and his team constantly improved methods for isolating and analyzing DNA from archaic skeletal remains. The research team took advantage of new technical advances that made DNA sequencing very efficient,” he said in a statement. the Karolinska Institute, in charge of awarding the Nobel Prize in Medicine.

The study of the Neanderthal genome took fragments of Neanderthal bones from about 40,000 years ago that preserved the DNA code in a good way.

And one factor that contributed to this happening was cannibalism among these hominids.

“When we analyzed the samples we noticed that quite often we had more success with bone fragments that actually had cut marks or had been deliberately broken. According to paleontologists, that suggested these individuals had been eaten,” Pääbo told him. to the BBC.

“If you separate the meat from these small pieces of bone and throw them in the corner of the cavern, where they dry out quickly, they will have less microbial activity and they will dry out much faster,” he added.

“We have cannibalism to thank for the success of our Neanderthal project,” he said.

Then he analyzed millions of pieces of DNA and used statistical techniques to isolate them from genes that were modern contaminants.

With this, he not only reconstructed the DNA of the Neanderthal but also found links between its genome and that of the modern human – which proves that the homo sapiens they had sexual relations and offspring with Neanderthals – and, in turn, discovered another species of hominids that lived mainly in Asia: the Denisovans.

A series of discoveries that prompted the meticulous Swedish researcher to receive one of the most outstanding international awards.