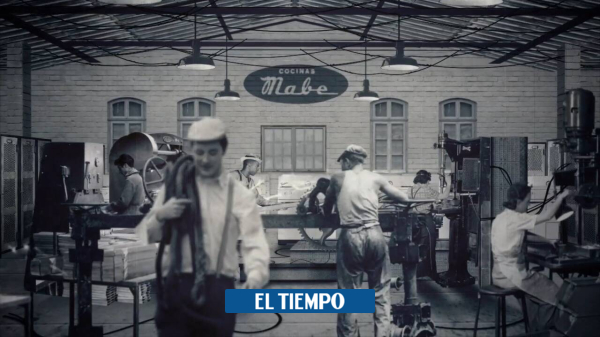 Manufacturing 3,800 refrigerators a day, that is, a rate of 158 every hour, should not be an easy task, especially when six out of 10 of these key home appliances are sold in Chile, Peru, Ecuador and several other Central American countries, meeting high standards of quality, efficiency and savings.

Reaching these levels of production and commitment has cost the Mexican multinational Mabe seven and a half decades; a constant search and application of the best technology, but also of human talent willing to give the best of themselves to satisfy millions of families around the world with quality products. And it was precisely what the company found in Manizales.

(Also read: The time that Don Julio, from LEY stores, was unemployed for two years)

The history of this ‘little hand’ company, which arrived in Colombia in 1993 with the acquisition of three companies, Polarix, Central and Phillipsdates back to 1946 when two Mexican visionaries, Egon Mabardi and Francisco Berrondo, founded Mabe in the capital of the Aztec country, a name that comes from the first letters of the surnames of these characters who have left their mark on the segment of household appliances for the home or white line, as this business is commonly known.

However, at that time, it was kitchen cabinets and furniture that dominated its main production line. The business of the so-called white line (refrigerators and gas stoves) would be consolidated years later, in the decade of the 50s.

(You may also be interested in: The businessman who challenged Santo Domingo and the Coffee Group in aviation)

This, according to the directors of the organization, grew at an accelerated rate to the point that 10 years later it began its first exports to countries such as Puerto Rico, Dominican Republic, Venezuela, until a short time later it manages to enter the competitive US market. A strategic alliance in 1987 with General Electric, at that time one of the world’s leading manufacturers of home appliances, allowed Mabe to build a plant in San Luis Potosí (Mexico) with the aim of producing products that would have as a destination that northern nation.

After this alliance, others would come in countries such as Venezuela, Colombia, Ecuador, Peru and Argentina, for which it was decided to create an own Technology and Projects Center in Querétaro (Mexico), in charge of research and development for Mabe and GE at the world.

In 2000, the company was already the undisputed leader in the Latin American market in the production of home appliances, also venturing into Brazil and Chile with the merger of GE Dako and CCE Electrodomesticos. Five years later, it acquires Camco, in Canada, the largest manufacturer and marketer of white goods in that country.

From Mexico to the land of coffee

Mabe plant in Manizales, where more than 1,500 people work.

Almost five decades after its foundation and given the rapid growth of the business, Mabe’s directors realized that it was time to start a process of expansion of the organization and have a direct presence in other markets in the region, no longer only through the export of its products from Mexico, which is why they set their sights on Colombia and set up their operational bases (1993) in Manizales (Caldas), locating their production plant there, where some 1,500 people work today, but they generate In addition, another 4,500 indirect jobs through the production chain of 49 satellite provider companies.

“As part of the international expansion to Latin America, the acquisition of Polarix and Ceteco in Colombia and Venezuela allowed us to reach other countries in the region such as Ecuador, Peru, Chile and Central America,” says Iván Zepeda Velásquez, corporate vice president of the company for Andean region.

He adds that: “The manufacturing plant located in Manizales is one of the 11 that the company has in the world, making Colombia one of the main exporters of products for the region. In this sense, the organization has made significant efforts to strengthen its contribution in the local market, being the Andean region a strategic focus because it represents the third area with the highest number of sales globally”.

Not surprisingly, 55 percent of what is produced in said plant is exported to Peru, Ecuador, Chile, Central America and other countries in the world, given its connectivity and access to qualified labor that make it a key point for the entire organization.

The Manizales manufacturing plant is one of the 11 that the company has in the world, making Colombia one of the main exporters of products for the region.

In Colombia, Mabe has been building a solid operation, based on the strengthening of its plant and its directors are confident that this position in the country will continue as a business and economic benchmark, but also as a development hub in Latin America, promoting growth of small and medium-sized companies (suppliers), developing new business ideas that have a global impact, generating many more jobs in the countries where they have a direct and indirect presence.

(Continue reading: Supersociedades announces that it will resume the public hearing of Justo & Bueno)

Like many of the companies in Colombia and the world, Mabe also felt the rigor of the effects of the coronavirus pandemic that forced them to stop their production plant and send many of their collaborators to work from home. However, this situation also allowed them to realize that there were many tasks that could continue to be carried out from there, but it also broadened their market vision much more given that the confinements changed some consumption habits of the families, who realized that needed more food storage capacity, among other demands.

Aspects of the Mabe refrigerator production line at its Manizales plant.

With a potential market yet to be explored and captured, the company’s directors in Colombia set themselves the goal of expanding their production capacity at their Manizales plant and maintaining the country’s leadership in the region.

Zepeda Velásquez said that the company has been developing an entire environment to strengthen its contribution to the local market, which is in fact an important area for the organization, since Colombia is part of the Andean area.

For this reason, an investment is being made to continue strengthening and diversifying its product offering in the country with the mabe, GE appliances, Café appliances and Monogram brands, the latter two focused on luxury segments.

These products, he points out, are characterized by providing technology, functionality and design, which seek to enhance the experience at home. In addition, they have sustainable attributes such as Aqua Saver Green Technology, which allows water consumption to be reduced by up to 76 percent in each wash, that is, what a person saves in a year is equivalent to what would be taken in 40 years of precious liquid.

There is also the Home Energy Saver technology, which makes it easier to save up to 56 percent of energy and gives consumers the option to be more conscious of saving for the economy of the home and with the care of the planet.

Another applied technology is Ultra Clean Air, which saves up to 70 percent of energy and optimizes the air, getting rid of viruses, bacteria and pollutants, contributing to the well-being of consumers.

For its directives, Mabe will continue to be a world-class benchmark in the home appliance market, which is why it has been consolidating a line of products with a sustainable approach and state-of-the-art technology that generates added value: Aqua Saver Green Technology, Home Energy Saver Technology Green and Ultra Clean Air Technology, which optimize water and energy consumption.

And as part of its commitment to Colombia, the organization works to support vulnerable communities, such as the delivery of 100 appliance kits made up of a refrigerator, stove and washing machine, to affected families.
by the passage of Hurricane Iota, in Providencia.

During the first stage of the covid-19 pandemic, more than 6,000 Aeroboxes were designed, a solution made with parts of refrigerators to protect health professionals during the care of patients affected by this virus.

Currently, within the framework of its 75th anniversary, the company presented its ‘Corporate Sustainability Strategy’, which seeks to strengthen its competitive position from three key aspects: continuous improvement of its social, economic and environmental performance; promotion of innovation to continue making efficient use of its resources, and development of white line solutions sensitive to the future needs of the environment, through products that go beyond their primary function aimed at improving the quality of life of homes .