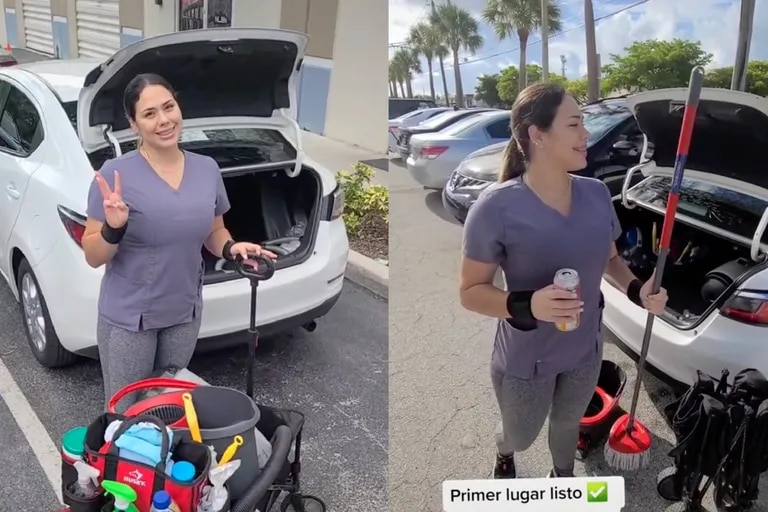 The American dream is not always easy to achieve. At first, many encounter difficulties since they try to get to the United States and, when they do, finding a job is another complicated step. Florangel, a tiktokera, had a different idea. Four years ago she wanted to undertake her own business cleaning houses in Miami Dade, Florida, and, in his networks, he recounted how this process was. Once he achieved it, his earnings increased, so he shared his experience on TikTok to give all the details, but he never imagined that it would go viral.

Florangel is a 28-year-old Venezuelan woman who, together with her husband sought a better quality of life in Miami. In a video of his account @florcleans he commented what is the amount you manage to earn in a day after cleaning several homes and offices. His business generated such a furor on the social network that now dozens of migrants residing in the North American country seek to follow in his footsteps.

The woman distributed cards with her data in residential complexes and supermarkets when she was just starting out, but she was unable to get clients. She thought all was lost until her husband recommended that she advertise on job applications like Offer Up Y 5 Miles. That was how, over the years, people met her and began hiring her cleaning services.

The tiktoker mentioned that the stable houses, as she called them, are the ones that cost her the most work to get, since most of them requested her to clean residences only once. Today It has regular clients and provides its services regularly at different times, especially on Saturdays and some weekdays.

“My name is Florangel and I am from Venezuela, I have been working cleaning houses and offices for four years independently and I am always full work. In the video, I cleaned three offices and a house with my husband, every 15 days this is our routine on Saturdays, ”she wrote in the description of her clip.

To give an idea of ​​the income she earns from her cleaning work, she made a recording of the places she works in a single day. Between three offices and a house, got an amount of 710 dollarsalthough she stressed that it is not an easy job and that it is also very tiring.

As revealed in their clip, this is the time it took for each of the properties and the payment they received respectively:

At the end of the day, Florangel and her husband earned $710 for cleaning all of these places on one Saturday. The tiktoker explained that at the end of the day it is difficult for them to even get out of the vehicle due to the exhaustion they have, but that the money they earn is worth it: “Everything we did between two people, my husband and I, we ended up tired, of course, but it’s worth it. It’s worth it,” he said in his network profile.