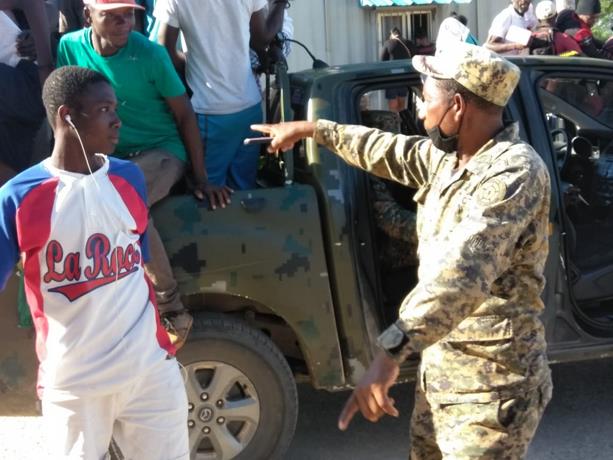 A claim for several days from the municipality of the town of Anse-à-Pitre Directed by Mayor Harry Bruno, wanting to establish the border market in his territory, he divided the border market again, being held in both parts separately.

As mentioned, the mayor of the Haitian city has booths created for Dominican merchants to cross over to sell manufactured and agricultural products, but the vast majority refuse to enter that territory for fear of the insecurity that prevails in Haiti.

However, some Dominicans have crossed over to the structure built in the Haitian town for the binational market to buy products and exercise free trade, as is customary every Monday and Friday.

Among those who were doing business were Dominican and Haitian merchants who reside in sectors of Pedernales, the municipality of Oviedo, Enriquillo, Paraíso, Chene, Polo de Barahona and other communities such as Ávilas, Aguas Negras, Los Arroyos, Mencia, La Altagracia and Las Mercedes.

Most of the merchants have shown negative before the division of the bilateral business, understanding that the merchandise and products would fall into contraband.

The same situation happened last Friday, when Haitian authorities did not allow their compatriots to cross to the Dominican Republic, in the form of retaliation and in order to pressure the Pedernales authorities to allow the Dominican-Haitian market to develop in their territory. .

This Monday, both the Dominican and Haitian territory were under the surveillance of the military as a preventive measure.

While members of the Specialized Border Security Corps (Cesfront) were in Pedernales, environmental vigilantes, who act as police officers in that country, were stationed outside the Haitian town.

During a tour, Listín Diario journalists also observed that at the gateway to both territories, army soldiers and agents of the General Directorate of Migration returned Haitians who were located in the streets and places of the population.

The nationals of the neighboring country were transferred in vans from those institutions and taken to the door of the town of Anse-á-Pitre-Haiti, from where those who cross into Dominican territory are mostly natives, part of them agricultural laborers and who work in construction .