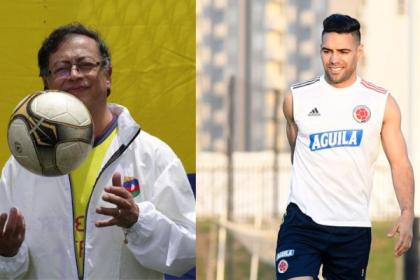 Gustavo Petro was elected the new president of Colombia and in his busy agenda there is room for many topics, including soccer.

During his campaign, today’s new President devoted a good deal of time to this discipline… for which, it must be said, he is far from denied. This is how he recently scored in a game he played in Bogotá:

“I share my goal today. The teams were mixed and the referee was a woman. I also made a penalty. You win as a team. The team of all the youth, of all the women, of all the working people”, he said at the time, celebrating his double.

Well, it is not the only reference to his interest in football, in which he hopes to have an influence because he knows many of the shortcomings of the local football administration, since he is also the father of a passionate footballer. These are his ideas and some plans that Ramón Jesurún, president of Fedefútbol, ​​called “the owners of football” may not like.

The team of your loves

During the first year of his mayorship in Bogotá, in 2012, the two teams from the capital were champions: Santa Fe, in the first semester, and Millonarios, in the second, for which at the time he received the two shirts

But when Santa Fe won the seventh star, after 35 years of fasting, he made it clear that his heart is ‘cardinal’.

“The Constitution has an article that I wanted to remember and a storm arose for me. The Constitution orders that every sports organization must be democratic. What does this mean? That those fans around a regional soccer team should have an expression in the leadership of his team’s soccer. Then they answer that it is private. No, the Constitution orders it. And that is not Colombian, it exists in the world,” Petro said in an interview with the Marca newspaper. Among his tools are those offered by the Ministry of Sport to intervene.

“My daughter is a goalkeeper for soccer teams. I have seen through learning from her how they discriminate, there is machismo within football. I love promoting women’s football, I have lived the experience firsthand and they will have all the support from me. This implies transformations in the sports vision of the country, what we want is that what the Constitution orders can be fulfilled and that is that each sports organization be democratic, ”Petro told El Alargue, from Caracol Radio, recently. It would be the ally needed to give women’s football the boost it needs to consolidate.