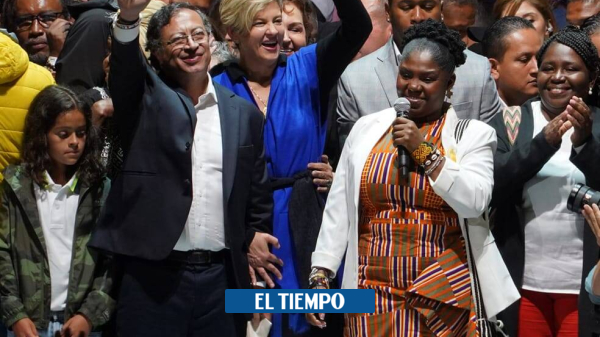 In addition to the followers of Gustavo Petro, the Latin American left also celebrates. The possibility of a new chapter of an ideological project that has taken its time to develop is openedwithout rush, but constant. Thus, Colombia could become that vital ally that was sorely lacking.

Close to the United States (USA), Colombia had taken the path of enmity and criticism at least with Venezuela and Nicaragua, countries that are part of the challenges that Petro will have to face as of August 7 when it becomes a tenant. of the House of Nariño together with his formula Francia Márquez.

Iván Duque leaves serious commitments. The recognition or not of Nicolás Maduro as president of Venezuela and with it the reestablishment of bilateral relations broken since 2019 but with years of deterioration, in addition to the need to make a decision on the role of the Venezuelan opponent Juan Guaidó and of the officials who work in Bogotá as diplomatic representatives of the interim government.

In the case of Nicaragua, Petro has questioned the development of Daniel Ortega but on top of that he has another problem and that is the resolution of the maritime dispute over the San Andrés archipelago. Although the International Court of Justice (ICJ) ruled in favor of Nicaragua, the dispute is not resolved.

(You may be interested in: Guaidó asks Petro to maintain protection for Venezuelans in Colombia)

“I congratulate Gustavo Petro and Francia Márquez for the historic victory,” Maduro wrote on his Twitter, adding that “new times are ahead for this brother country.” The Foreign Ministry through a statement invited to build relationships.

For his part, Daniel Ortega also extended congratulations to the leader of the Historical Pact in a letter, while the opposition of that country asked that Colombia maintain its position of criticism against the Nicaraguan government.

“In the case of Nicaragua, there may be the possibility of a pre-negotiation with the situation in San Andrés that has generated diplomatic and strategic security problems,” the analyst explained to EL TIEMPO.

Arias assures that in the Venezuelan case, the connection can lead to alliances promoted by the left to take actions such as putting aside the union with the North Atlantic Treaty Organization (NATO) with the idea of ​​seeking to break those policies of relationship with the US

“Perhaps there will be a incorporation into the Bolivarian Alliance for the Peoples of Our America (Alba)”, affirms Arias, adding that this would mean a blow to the Organization of American States (OAS) “and finally a way to seek the scheme of the left waiting for Lula’s victory in Brazil, in conjunction with Mexico to try to eliminate the OAS”.

Analysts agree that this return to relations with Venezuela is inevitable. Although in the campaign Gustavo Petro set differences towards the way of governing of Nicolás Maduro, It is no less true that ideologically and by virtue of the alliances of the Latin American left, it is very likely that the restoration will take place gradually.

Above all because there is a need: “In the case of Venezuela, the difficult humanitarian situation, in the case of Colombia because it needs to reactivate the productive apparatus that has always benefited from the commercial relationship,” explains Jesús Yánez, political environment analyst and former Venezuelan deputy.

On behalf of the Bolivarian Republic of Venezuela, we congratulate the people of Colombia for the democratic day held this Sunday, June 19, where the winner was @petrogustavo the destiny of our peoples must be one of cooperation and solidarity pic.twitter.com/BdWW85g6xX

The internationalist and diplomat Jesús Mazzei agrees with Yánez. Only on the border, the economic losses are considerable, at the best moment the trade generated income of about 7,200,000,000 dollars, but everything “will depend on who is going to direct the chancellery. This constrained suspension of relations should never have been reached.”

The landscape with the US

Now, how is the Colombia-United States relationship? For Michael Weiner, a senior associate at the American consulting firm Albright Stonebridge Group (ASG), the bilateral relationship has strong foundations. “Colombia will continue to be a key strategic partner of the US in the region.”

In dialogue with EL TIEMPO, Weiner assured that just as Petro has been a critic of the approaches adopted by both countries in terms of security and fighting organized crime, “its victory will require a different approach to these efforts by the US. A Petro administration is likely to review policies such as extradition and coca eradication in rural areas.”

Although the normalization of diplomatic relations with Venezuela could lead to greater tension with the United States, particularly on issues related to security collaboration – Weiner explains – the Biden administration has recognized the need to be more flexible and pragmatic with its approach towards Venezuela, and Petro is not the first recently elected leader in the region to take a complacent stance towards Venezuela.

Venezuelan migration: barriers, challenges and recommendations
Restart of negotiations? Chavismo and opposition will face each other in Oslo