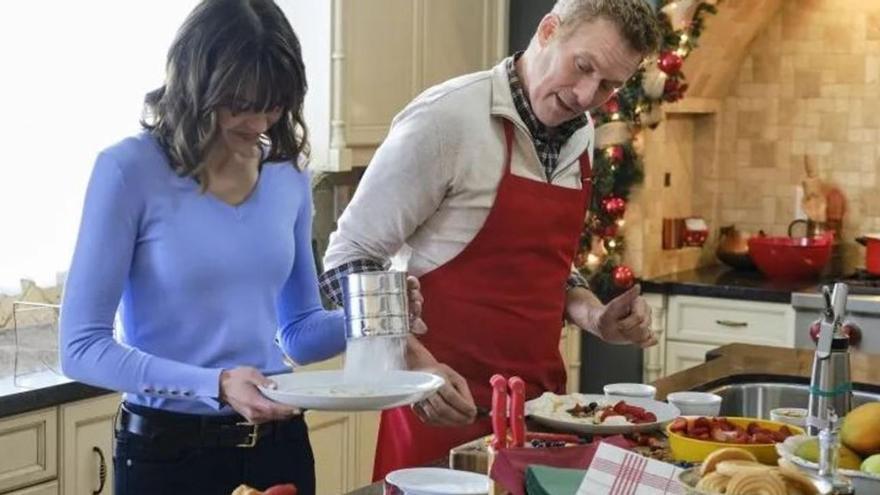 Streaming platforms are filled these days with Christmas content at large. In the multitude of posters, it is almost impossible for one to escape from a very specific type: a boy and a girl, smiling extremely, posing sweethearted in front of a hyper-colorful scene, populated by mistletoe, pine trees topped with ornaments and much, much glitter glitter. Yes, it’s the christmas movies from the American production company Hallmark, tapes as hated by some as devoured by others (let’s say it now: myself), which are seasonal fruits that expire within 30 days. Conventional (some titles are interchangeable), conservative (though, as we’ll see, with hints of openness), predictable (boy and girl always end up together), and whatever you want, many of them are indeed balsamic, which we leave them on off like computer screen walls, which relax and offer us the beautiful possibilities of a better world.

We make here, without irony or air of superiority, a small guide with some of the most meritorious films of this particular subgenre (all of them, by the way, available on Amazon Prime Video during these holidays) that has more and more followers in our country.

Starring Aimee Teegarden, a name so incredible that it could only be true (correct: it is the real name of the actress, known for her participation in Friday Night Lights, among other series). A film that is more than curious for bringing to a total, abracadabrant paroxysm, the characteristics of Hallmark Christmas products: actually, the film seems like a succession of extremely happy cartoons starring the pluperfect models that appear in the stock images when we go to buy photo frames. There are conflicts, of course there are conflicts in the plot (an orphan in her thirties discovers through a DNA analysis that she did have a biological father, a man who was unaware of the girl’s existence; then there is more trouble). It’s all a dramatic tour de force saved from the drama with a blow of mistletoe, hot chocolate and homemade cookies.

Another unique bet from Hallmark. If you are looking for something more depth and emotion in the label’s usual romantic-jinglebellian plots, this film, starring Jessy Schram and Brendan Penny, you’ve got what it takes: Structured like a road movie, its plot unfolds from an absorbing mystery (a woman has an accident, loses her memory and doesn’t remember what she’s doing in a remote town) and addresses important emotional issues along the way. B.Good gallery of secondary characters, excellent chemistry between the main performers, human conflicts posed in a thorough way…

In December 2021, a lady from Texas tweeted the following complaint: “Even Hallmark Christmas movies are no longer safe from The Homosexual Agenda.” She did it for this movie in which there is a striking but slight subplot starring two lesbians: there are no coming out of the closet or analysis of the homosexual problem, no; simply, two strangers meet in a Christmas setting and like each other (no kiss). Be careful, it is an upward trend: Not too long ago Netflix released ‘The Season of Happiness’, with Kristen Stewart, the first big-budget Christmas movie to star lesbians (not bad, by the way).

How about the rest of ‘An Unexpected Christmas’? Just for the annoyance of the lady from Texas it’s worth it but there’s also a collection of more or less charming family entanglements about an ex-partner (heterosexual) who did not make the break public at the time. The magnetism and sympathy of Bethany Joy Lenz (a regular titan in this type of product) do the rest.

Christmas under the stars

Perhaps one of the best products of its kind. Respecting and celebrating each and every Hallmark production line convention, the usual 87 minutes (no film from the label reaches 90 minutes) is full of melancholy and emotional adventures, also due to a somewhat more mature approach when it comes to talking about sentimental relationships (one of the main characters is a senior widower, somewhat back from everything at his age). mmore discreet and less ornamental than most in its own without being a nuisance, and leaves a certain residue.

Previous Juliana Nalú opted for a black microbikini, while Rhea Durham turned to colors: celebrities in one click
Next The trailer of ‘Fast X’ will arrive in less than two months according to Vin Diesel