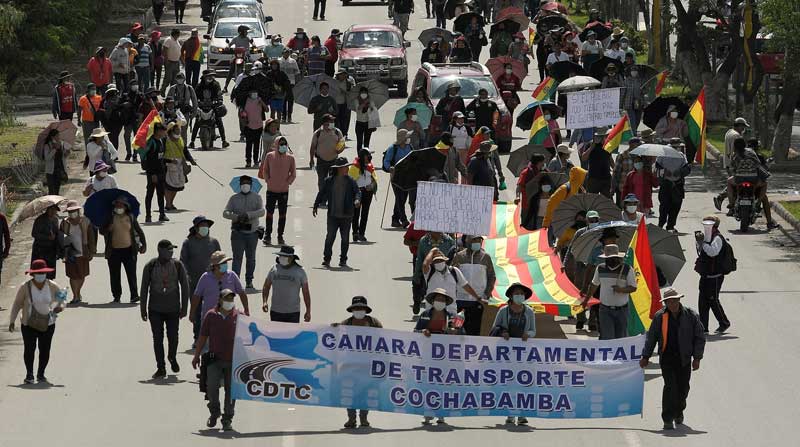 Government seeks to dismantle the strike in Bolivia

The government of Bolivia tries to dismantle the strike by summoning some sectors to dialogue and leaving out civic committees and opponents whom he accuses of seeking to “destabilize” the country, while the official bases have announced new mobilizations to “defend” democracy.

The controversial law of the National Strategy to Combat Legitimation of Illicit Profits and the Financing Terrorism has been the center of the marches, blockades and other actions that have been partially registered throughout the country and with several incidents between protesters, the Police and official sectors.

On this fifth day of unemployment, on Santa Cruz, economic engine of the country and axis of national strike, a greater presence of the military in the streets was noticed this Friday, which for days has worried regional authorities and mobilized sectors because it occurs in the midst of conflicts over the repeal of the law.

However, from the Army General Staff It was stated that these soldiers and the military equipment that was displaced to that region are part of the events for the 221st anniversary of the army.

In other regions the demonstrations as in Tarija where there was a “big flag”, in La Paz, where there was another evening mobilization and in Sucre, the capital of Bolivia, the Chuquisaca transporters announced that they would blockade from next Monday.

In Cochabamba, heavy transport and other sectors made a massive march and they blocked some streets of the city in which posters with messages “die before slaves live” were seen, later they were brought together in an expanded one led by the National Confederacion de Trabajadores Gremiales de Bolivia.

The government of Luis Arce He called for a dialogue this Saturday to which he only invited some sectors as denounced by the International Heavy Transport Association (Asociatrin).

Summoning a single group “is the technique of government to try to divide ”, said the leader of Asociatrin, Marcelo cruz, who remarked that in that region the protesting sectors are united.

“We are not going to go (to the dialogue) because unfortunately the Government is holding meetings with its masista hordes” on the “cursed law 1386” and “must take into account” that “we are very firm” to demand the repeal, one said to Efe. of the members of the Departmental Chamber of Transportation in the city of Cochabamba.

The president of the Civic Committee of Santa Cruz, Romulus Calvo, affirmed that they are already “used to the fact that the Government always wants to negotiate individually to diminish the national civic movement.”

In the same vein, the different departmental civic committees that the ruling party accuses of trying to “destabilize” the government with the protests.

Measurements of both sides

Several unions and citizen platforms indicated that they will analyze the announcements that arise from the government at their meeting in Cochabamba this Saturday with the sectors they invited to dialogue, to define new mobilization measures.

While former President Evo Morales and leader of the Movement to Socialism (MAS) announced this Friday that sectors related to his party will begin on November 23 a march from the city of Caracollo, in the department of Oruro, to La Paz, the seat of the Government and Parliament, to “defend” the management of Maple.

From a municipality in Potosí the president of Bolivia He assured that he had the support of indigenous and miners “warriors” to defend his Government from the “coup” attempts.

Precisely in that region violent events were recorded with assaults to journalists by the Policeman and related to MAS, to which was added the death of a man for whom the Government blames the opposition, despite the autopsy indicating that he died of “mechanical asphyxia due to bronchial aspiration with a foreign body” and “showed no signs of violence ”.

All this situation led to sectors agglutinated by the Potosinist Civic Committee (Comcipo) will declare Arce “persona no grata”.

Bolivia is going through a persistent political polarization from the crisis 2019, in which, in the opinion of the government, there was a “coup” and that has linked the current protests with political groups that seek “impunity” for these events.