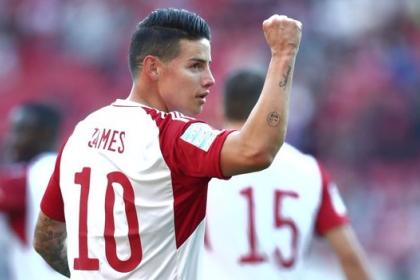 James Rodriguez returned to the top of European football and since joining the olympiacos From Greece, the Colombian midfielder has gradually managed to return to his best version, where at least he has achieved continuity.

At Olympiacos, James found his place in the world of football and has participated in 11 games, starting nine times, as well as contributing three goals that have been mostly important for his team.

One of James Rodríguez’s best games at Olympiacos was undoubtedly in the last game of the year 2022 against Asteras for matchday 15 of the Greek League, where the Colombian midfielder was the best on the field with a score of 8.8, due to his goal and assist that he scored in the 5-0 win.

However, his goal turned Europe around, where he scored a great shot from outside the area and left the Asteras goalkeeper without a chance, scoring the second for Olympiacos.

precisely, andhis goal against Asteras ended up being nominated as the best of the date in Greece, where the Colombian has good chances of becoming a creditor of this weekly prize that the local championship awards to the players who stood out the most in front of the net and winning, it will end with a glorious end of the year for the midfielder.

Through social networks, the Greek League delivered the list of the five best goals of the date 15, where James competes against Doumtsios (Levadeiakos), Orbelin Pineda (AEK), Nélson Oliveira (PAOK) and Kuen (Atromitos).

For now, James Rodríguez will have a short break for the year-end holidays, but he will return to action on January 3, 2023, in a match that Olympiacos will play against Ionikos de Nicaea, at 2:30 p.m. (Colombia time). ).

Previous The secret shortcuts of Google that very few know
Next Medicine student was released by Unase; kidnappers asked for $300,000 to return him to his family | Security | News