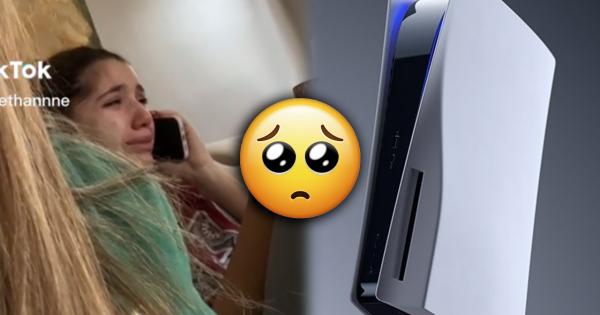 Girlfriend buys a PS5 for her partner without knowing that they had already given her one; she breaks down in tears

December is the ideal time to pamper family and friends with attractive gifts, and it is no secret to anyone that video game consoles are one of the most requested gifts for these Christmas parties. However, the good gesture of a girlfriend towards her partner was overshadowed by the lack of communication.

Despite the fact that the new generation opened its doors more than 2 years ago, finding units of the new Sony and Microsoft consoles in stores in some countries is still a challenge. Therefore, a young woman thought that she found the perfect gift when she bought a new PlayStation 5 for her boyfriend.

Find out: Dad gamer receives a PlayStation 5 as a Christmas present and cries with emotion

The problem? The girlfriend was unaware that her partner’s parents had already given her the Sony console for Christmas. So, she broke down in tears when she found out over the phone that she bought the same gift.

Related video: PlayStation closes 2022 in a mediocre way – What about the company?

Girlfriend wanted to surprise her boyfriend with a PlayStation 5

The bride’s sister recorded the curious incident and shared it on her TikTok account. The video immediately went viral, garnering almost 6 million views since then. So, we see that the young woman cries while she talks on the phone with her boyfriend. At one point in the conversation, she assures that the PlayStation 5 is out of stock everywhere; “How did your parents get it?” she asked.

TikTok users reacted to this cute but sad video. In the comments section, they expressed their empathy and understood the young woman’s frustration. They also recalled the importance of communicating with the couple’s family to prevent incidents like this from happening.

In case you missed it: PlayStation 5 is the most wanted Christmas gift in the US, according to a study

“I cried too. Imagine being so excited to give the love of your life a gift as big as this to see their reaction, but have the moment ruined,” commented one netizen.

The bride apparently responded in the comments section that she didn’t tell her romantic partner’s parents of her plans because she knew they would tell her not to spend so much money on a gift. Unfortunately for her, her surprise was ruined by this lack of communication.

While it is unknown what happened to the duplicate PlayStation 5, some people argue that the couple should take advantage of this situation to play together. Likewise, there were those who affirmed that the groom is lucky to have a girlfriend and a family who love him very much.

But tell us, what do you think of this curious situation? Do you know of any similar case? Let us read you in the comments.

Click here to read more news related to the PlayStation 5.

Related Video: Face It, PlayStation: Xbox Has the Lead

Previous Eleven perfect applications to get the most out of your new iPhone
Next ‘Potro’ Gutiérrez, a former Real España coach, celebrates his first title with Cruz Azul of Mexico