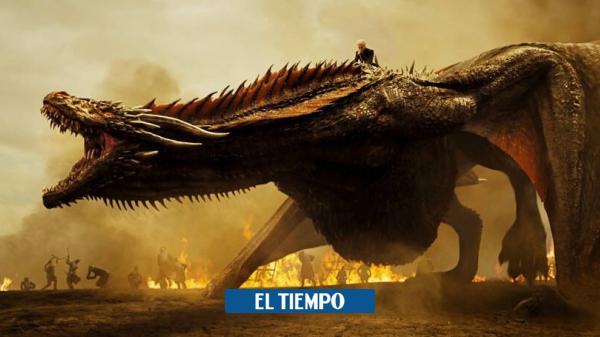 There is no doubt that GOT or Game of Thrones (Game of Thrones) is the most important series of the 21st century. It is the program with the most Emmy awards in history -surpassing The Simpsons and Frasier-, the most requested television premiere in recent years, and even the second most pirated series (The first is The Mandalorian).

(We recommend: BOCAS presents a series of photographs on the history of LGBTIQ+ mobilizations in Bogotá)

From 2011 to 2019, over eight seasons, it broadcast 73 episodes with an average duration of between 50 and 80 minutes each, on the HBO Max channel and platform. In that period, it reached an audience of 44.2 million viewers in 207 countries for the last season. The cost of its production did not fall below 10 million dollars for each episode and its recording scenarios toured majestic landscapes in more than 10 countries: the United Kingdom, Croatia, Iceland, Spain, Malta, Morocco, among others.

media like The Washington Post, Time, The Hollywood Reporter and Rolling Stone It was listed as one of the best television series of all time. It quickly became a cultural and digital phenomenon that today announces its extension with several spin-offs, beginning with House of the Dragona prequel set 200 years before the events of GOT.

(We suggest: Colombia portrayed by the best photographers: The Family of Man in Bogotá. Graphic Chronicle of BOCAS)

Writer George RR Martin and the producers of Game of Thrones, during the 2019 Emmy Awards ceremony.

But why would a fantasy drama series inspired by the medieval england produced such an impact on viewers in the 21st century? Critics have said that it is a perfect combination of dragons, sex and blood. However, it is much more than that. GOT is a successful adaptation of the best seller Song of ice and fire (1996), a saga of historical novels created by the 73-year-old American writer and screenwriter George RR Martin.

Based on the great creative minds of fantasy (Tolkien, Vance, Williams), in the master of family disputes, power and the exploration of the human condition (shakespeare) and in a saga of historical novels to which he says he particularly owes his muse (The cursed kings, of maurice druon), Martin created a universe of fiction and history published in 5 volumes.

‘The universe of Westeros‘, named after the fictional continent where the plot of Game of Thrones takes place, places Seven Kingdoms that coexist between periods of suspicious calm and brutal violence for the dominance of power on the iron throne. The plot finely weaves together several stories simultaneously to carefully build a universe: the threat of bestial creatures and some shadows from the past that seem to defy peace unleash a visceral and unscrupulous war between the noblest families and profoundly shape the destiny of its characters. .

After years of offers to project the history of the Targaryen, Stark, Lannister families and others on the screen, Martin accepted the television proposal from producers David Benioff and DB Weiss, at HBO. In its 8 years, GOT has had a cast with figures like Sean Bean, Jason Momoa, Emilia Clarke, Kit Harington, Peter Dinklage, Pedro Pascal, among many others. However, as of the sixth season, the series surpassed the books, so that he had to do a supervised adaptation of the story. This earned him a mob of uneasy fans who grew apart as the series progressed.

(Also read: The man who portrayed the Beatles, the queen and the death of B. Kennedy. Interview and graphic chronicle with Harry Benson)

The reasons for its success are multiple: the stimulation of the senses to portray an ambitious, selfish human nature, capable of violence so raw and overwhelming that it even drove away some viewers; the documentary construction of a fictional universe whose characters seemed to speak more to the audience about contemporary society; the creation of an ecosystem of fans around the world that produced a wave of digital networks of comments, opinions and joint views every week; an unpredictable plot developed by unexpected plot twists for the entire audience. That combination between the adrenaline of the unexpected and the energy of its scenes made it an addictive series for many.

After a two-year hiatus, the new prequel, House of the Dragontells the story of the three centuries of reign of the Targaryen family, 200 years before the usurpation of the throne to Aerys II, the father of Daenerys, one of the main characters in the Game of Thrones saga. He will also explain the events of the civil war in Westeros known as the ‘Dance of the Dragons’. She is inspired by the book fire and blood by the same author, with the executive production of this, together with Ryan Condal and Miguel Sapochnik.

BOCAS presents the main characters of this spin-off, which will be broadcast from August 21, 2022 on the HBO Max platform and will have ten episodes.

King Viserys I Targaryen he is the fifth king of the dynasty to rule the Seven Kingdoms. His death triggers the fight for the throne. Portrayed by actor Paddy Considine

Prince Daemon Targaryen is the brother of King Viserys I. He marries his niece, Princess Rhaenyra Targaryen, and will fight for his throne after the king’s death. Played by Matt Smith.

Prince Daemon Targaryens he is the brother of King Viserys I. He marries his niece, Princess Rhaenyra Targaryen, and will fight for his throne after the king’s death. Played by Matt Smith.

Queen Alicent Hightower is the second wife of King Viserys I and the daughter of Ser Otto Hightower, the Hand of the King. Her son will dispute the throne with the eldest daughter of the king’s first marriage. Portrayed by Olivia Cooke.

Princess Rhaenyra Targaryen She is the eldest daughter of King Viserys I with his first wife. After the death of her father, she disputes the throne with her half brother. Portrayed by Emma D’Arcy.

Performed by Milly Alcock, this is what she looks like Princess Rhaenyra Targaryen in his youth

Lord Corlys Velaryon, or Sea Snake, is the Lord of House Velaryon, a lineage as old as the Targaryens, who will support Princess Rhaenyra in her fight for the throne. Portrayed by Steve Toussaint.

Mysaria She is a former prostitute who arrives in Westeros and becomes Prince Daemon Targaryen’s most trusted ally. Portrayed by Sonoya Mizuno

Ser Criston Cole is Lord Commander of the Kingsguard during the reign of Viserys I. After his death, he fights for the throne for his son Aegon. Portrayed by Fabien Frankel.

Ser Criston Cole is Lord Commander of the Kingsguard during the reign of Viserys l. After his death, he fights for the throne for his son Aegon. Portrayed by Fabien Frankel.

Ser Otto Hightower He is the father of Alicent Hightower, wife of King Viserys I. Portrayed by Rhys Ifans, he is the King’s right-hand man.

José Antonio Ocampo, Minister of Finance, is the cover of the new edition of BOCAS Magazine

José Antonio Ocampo, Minister of Finance, is the cover of the new edition of BOCAS Magazine

(We recommend a BOCAS interview from our last edition: The outgoing director of DANE spoke in BOCAS about his homosexuality, bullying and his future)