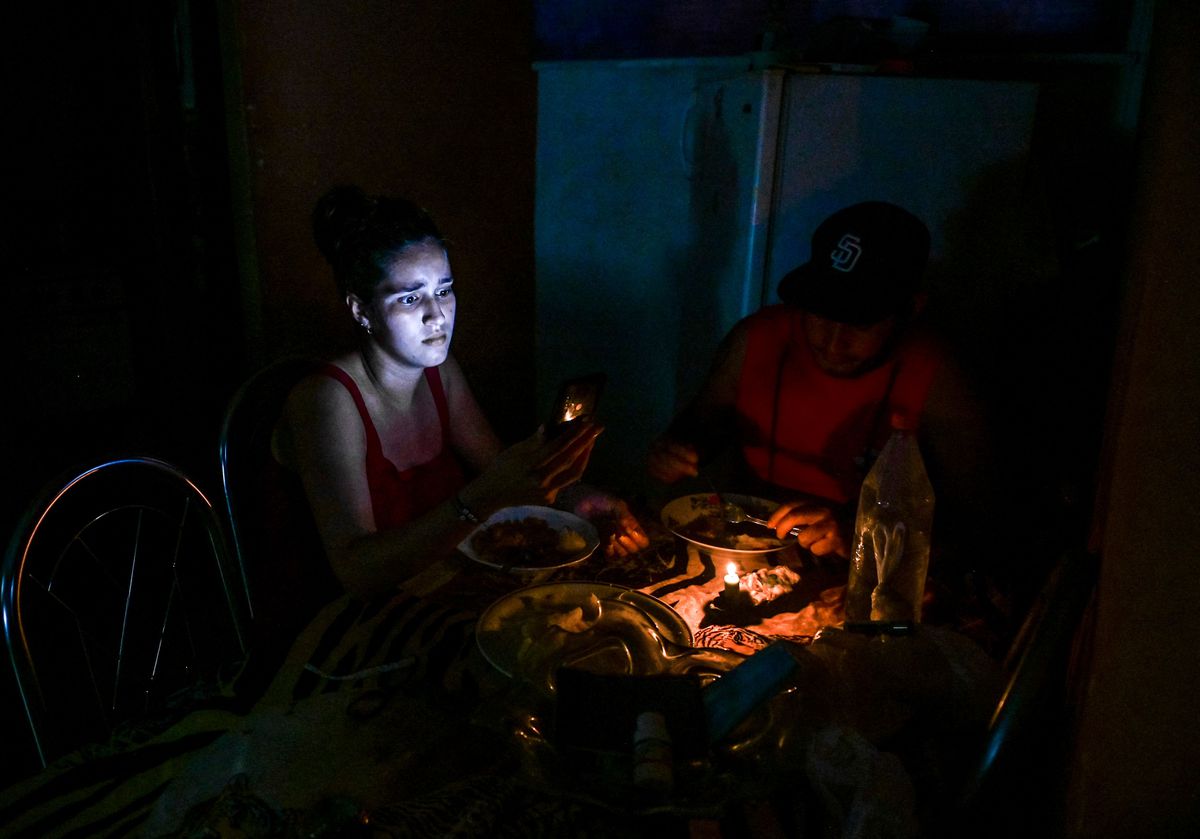 The last time we agreed that we would continue talking about the controversial new Cuban Penal Code, which imposes sentences of up to three years in prison for anyone who insults or offends the main leaders of the country and establishes sanctions for those who “abuse” constitutional rights (sic ). In the end we did not touch the subject, at least directly. Lázaro prefers to comment on the trial held on the island against the dissident artist Luis Manuel Otero Alcántara and the rapper Maykel Castillo, with the artistic name “Osorbo”, which in the Afro-Cuban religion of Santería means the bad, the negative, the dark complications of life that haunts one.

Accused of crimes such as outrage against the symbols of the country, defamation of institutions and organizations and of heroes and martyrs, public disorder, contempt and attack, Alcántara was sentenced to five years in prison and Maykel Osorbo to nine. The sanctioned decided not to appeal the sentences because they considered that the judicial process was a farce.

“It’s outrageous: what in any country would be a fine, here is a ball of years in prison. They are political sentences, exemplary, that seek to discourage any expression of dissent, ”she says.

We are on our way to Diez de Octubre from Centro Habana and in the car it starts to ring On the moonguaracha by Pedro Luis Ferrer collected on his album Tangible, which is one of our flagship albums. The song jokes as soon as it begins: “On the moon when you can be a I’ / two I’three I’four I’ maybe / but feel’ you can’t be.”

“That,” says my friend, “without freedom it’s fucking hard to live, but without eating, you can be on the moon or anywhere, or you’ll go crazy.”

We headed to the Corner of Toyo precisely to look for a bar of gouda cheese that Lázaro has squared with one of his “connections” on the black market, who knows where he got it from. These days everything is scarce in Havana and cheese is not found in any national currency store, only in currency stores, to which Lázaro does not have access because he does not have dollars, so he has no choice but to go to the black market where each bar of gouda (weighs three kilograms) costs 6,000 pesos, more than the monthly salary of a doctor, a judge or an academic, and four times more than the maximum retirement pension (which is 1,500 pesos).

On our way to the cheese we passed through the Ciudad Deportiva, where Havana World Music was held a couple of months ago, an alternative music festival that had not been held for a long time due to the pandemic and that this year was organized by the singer Eme Alfonso. In the days before the concerts the universal deluge fell in the capital, and the festival, which at first was going to be outdoors, was transferred to this large covered sports center, where on the last day the musician Carlos Varela played with the band of the.

Varela, who has rejoned power all his life with his critical songs, did the same on May 29 at Ciudad Deportiva. Lázaro, who was there, says that the Carlitos concert was exciting, since he had not played in Cuba for a long time and on several occasions, between songs, he shouted “Viva Cuba Libre” and the people responded with applause. His lifelong classics were not lacking in his repertoire, from William Tell (William Tell, your son grew up, he wants to shoot the arrow / It’s up to him to prove his worth using your crossbow) a family photo (Behind all these years, behind the fear and the pain / We live longing for something, and discover with disappointment that it did not help). At the end of this song, and also when she sang fools fair (They drove us all crazy / Waiting for a dream, for a broken dream), the people in the coliseum began to chant “freedom, freedom” at the top of their voices.

“Although that didn’t last long, it sounded thunderous, and look what came after…”, points out Lázaro. What he is referring to is the dozens of articles and comments on social media written about the incident after the concert. Two days after Varela’s presentation, the wife of the Cuban president, Lis Cuesta, wrote on Twitter without referring to Varela: “Freedom, the most beautiful and the most abused word. It cost him so much to conquer her, that he can only defend her! ”. The next day, also without mentioning the concert, in an article titled “Viva Cuba Libre” the official Cuban press referred to the expression as a cry “of mambí origin” that “contained the need and the purpose of shaking off the domination of the oppressor” of Spain.

“So far, everything was more or less subtle, but then Varela fell on top of it from all sides,” says Lázaro. In Cuba, the official cyberclairs called him everything: yes “opportunist”, yes “stateless person at the service of the empire”, yes traitor, yes he had charged the State for his actions and had stabbed the revolution. All cuties, wow. On the other side – from the most extreme sector of Miami – they also told him even my soul. “They accused him of contributing to giving an image of false spaces of freedom on the island and of throwing squid ink to make up the dictatorship, in addition to reproaching him for not having talked about the 11-J prisoners and demanding his freedom. In short, a poem from both sides… ”, he says embarrassed.

With the cheese safely stored, we set off for Lázaro’s mother’s house in the town of San José de las Lajas, the capital of Mayabeque. In the car player keeps playing Tangibleby Pedro Luis, who now sings a changüí with his daughter Lena, who says in his lyrics something that most Cubans sign: “I don’t want butter, I don’t want butter / they give me the dough to relieve myself The headache”.

Although San José is located only 30 kilometers from Havana, it is another world. Obtaining any medicine or food here is much more complicated than in the capital (and that is saying something), and since the blackouts returned to Cuba for months with unusual force, in San José and its surroundings the power goes out daily. To avoid possible incidents and protests, in Havana until now there have been practically no cuts in the electricity service, but in the interior of the country the blackouts have reached 10 and up to 13 hours a day, in many cases at night, when due to In the suffocating heat of summer it is impossible to sleep without a fan, explains Lázaro.

“Everyone is nervous. On top of the fact that money is not enough and that getting anything to eat is an adventure, if what you have spoils because the refrigerator does not work, you hang yourself, ”she says. He affirms that “the social temperature in Cuba is not that it is hot, it is burning. At a minimum, people go out into the street with pans to protest shouting ‘turn on the current, pinga’.

The authorities admit that there have been cacerolazos in various towns and cities in Cuba when the power goes out. So far they have been minor protests, but they are becoming more and more frequent and escalating. The blackouts, Lázaro recalls, were one of the causes of the historic demonstrations on July 11 last year. He says he doesn’t know “what’s going to happen” if things continue like this.

The Government has already said that the energy crisis has no short-term solution, since the thermoelectric plants are in a terrible state due to the lack of maintenance and investments for years, in addition to the fact that fuel is scarce. In recent days, the deficit in electricity production has exceeded 20% of the needs, and in view of this scenario, the first secretary of the Communist Party in the capital, Luis Antonio Torres Iribar, recently announced that the inhabitants of Havana will begin to experience four-hour blackouts starting in August, between 10 in the morning and 2 in the afternoon, but only every three days, in a “solidarity gesture” with the rest of the country.

Lázaro tells it and doesn’t know whether to laugh or cry: “solidarity blackouts… But who comes up with that? If they want to show solidarity, let them buy gouda cheese at normal prices once every three days, and you will see how happy everyone is.”

When we left San José the current still hadn’t arrived, and it left more than four hours ago. Lázaro’s mother assures that it is difficult to live like this and that, given the lack of hope, many young people from the town have left the country in the last year. “Everyone here is in a psychiatric hospital,” the lady jokes. We give him a kiss. In the car to Centro Habana we hear again the privileged voice of Pedro Luis: “Even if the sky falls / I try to be happy…”, our idol sings.