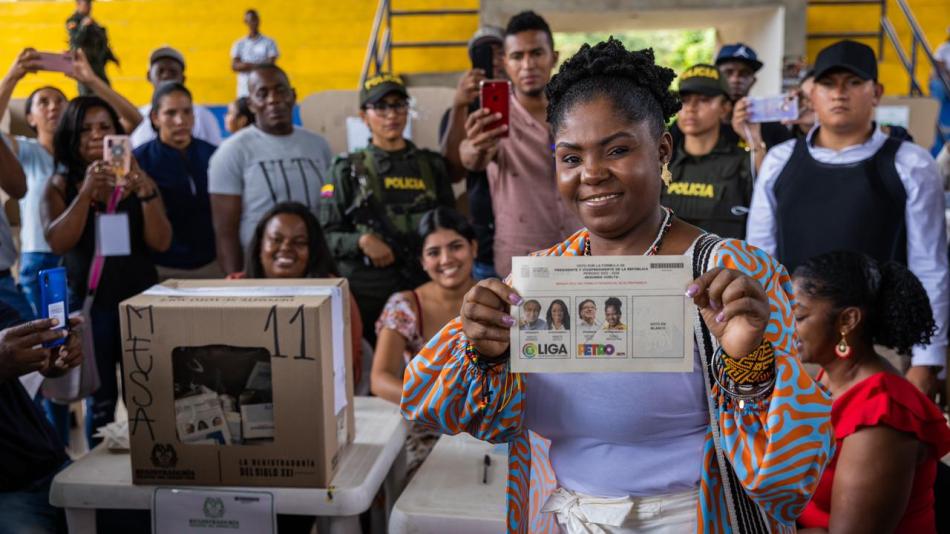 France Elena Marquez Mina was elected as the new vice president of Colombia for the period 2022 – 2026 this Sunday, with more than 50 percent of the votes in the second presidential round. Woman is the formula chosen by Gustavo Petro Urrego, from the Historical Pact, who will be the country’s first leftist president.

(See: Results of the second presidential round in Colombia)

Her election is historic because she became the first Afro woman to reach the Vice Presidency of the country. In addition, it is the second consecutive time that a woman will assume the position.

France was born in Suarez, Cauca. She is a social leader, a lawyer from the Santiago de Cali University and is pursuing a specialization in creative writing from the ICESI University. She is recognized for being an activist and winning the Goldman Prize —considered the ‘Nobel Prize for the environment’— in 2018 for her fight against illegal mining in the southwestern part of the country, which began when she was on the Community Council of the La Toma district of her municipality. native.

(Read: Gustavo Petro: who is the first president of the left in Colombia)

However, her defense of the territory and the communities of that region have led her to face a path with threats from illegal armed groups. In that year he suffered an attack in Santander de Quilichao, Cauca, during a meeting with the Association of Community Councils of North Cauca.

(Read: Gustavo Petro: these are the proposals of the next president of Colombia)

In 2019, the British media BBC included Francia Márquez in the list of the top 100 most influential women in the world. “I want to be president of this country,” she wrote at the time on her Twitter account. In 2020, she was president of the National Council for Peace and Coexistence, when she devoted herself to defending compliance with the Peace Agreements.

(Read: Francia Márquez: “Thanks to the Colombians who went out to vote today”)

Among his recognitions are also the National Award for the defense of Human Rights, in 2015.

In 2021, she was a presidential candidate for the Historical Pact and participated in the consultations on March 13. He got the largest vote in the coalition with 783,160. On March 23, Gustavo Petro announced that it would be his vice-presidential formula.

France Marquez has been recognized for becoming the voice in defense of the communities, the environment and the ancestral territories of the Colombian Pacific. “I am part of a process, of a history of struggle and resistance that began with my ancestors brought in as slaves. I am part of the fight against structural racism. I am part of those who fight to continue giving birth to freedom and justice”, she has said repeatedly.

Her fight for the protection of the “big house”, as she calls the territories, began when she was 15 years old. At the end of the 1990s, Márquez participated in processes in his community for the effects of a megaproject to divert the Ovejas River to the Salvajina dam.

In that order of ideas, for his presidential candidacy this year, he launched the movement ‘I am because we are’, which also became his political catchphrase. It arises from a translation of the word ubuntu, a philosophy of South African tribes that means “I am because we are”.

(Read: Turnout in this election is the highest since 1998)

During the presidential race, he burst onto the public agenda with a speech focused on historically excluded communities and regions, feminism in politics, dignity, justice and rights, and managed to put issues such as racism, classism and machismo on the debates.

(See: This is the government plan of Gustavo Petro and Francia Márquez)