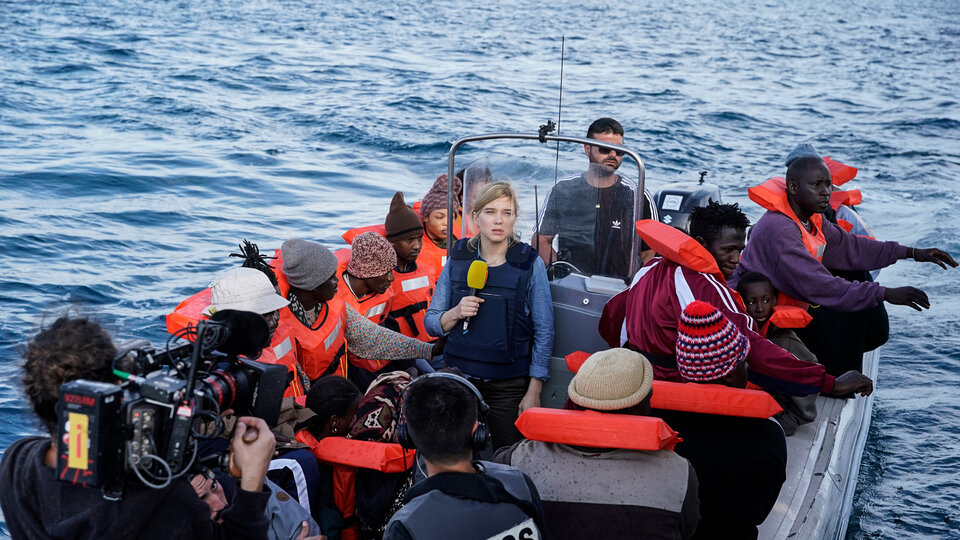 “France – In the foreground”: news as spectacle | By Bruno Dumont, with Léa Seydoux, on HBO Max

France – On the front page 7 points

“No one can understand what I’ve been through.” The person speaking to France de Meurs is her interviewee, a long-suffering woman whose husband, with whom she lived for thirty years, has just been arrested for sexually abusing a girl. The phrase, however, could perfectly well be pronounced by France herself, who at this point in the story has suffered several personal blows and professional setbacks, and has reinvented herself to return to being almost the same. France – On the front pagethe most recent film from the rabidly iconoclastic Bruno Dumontsets aside the formal rigor of his two previous feature films –the diptych made up of Jeannette Y Jeanne, a particular approach to the life and work of Joan of Arc– and concentrates the guns on another area of ​​her interests: satire, caricature. The grotesque, even.

On a paper haute couturewhose measurements fit like a glove on Lea Seydouxthe actress plays France, a star journalist on French television loved by millions, who can either interview the highest representatives of national politics in the studio (and have dinner with them later) or don a helmet to traverse war zones in the Middle East, between shots and cannon fire.

That immense fame is demonstrated in the first scene, which thanks to the montage intersperses images of French Prime Minister Emmanuel Macron with shots of the protagonist, during a press conference at the Elysée Palace. Precisely, the concept of artifice is present both in fiction and in the way in which it is constructed. France repeats with variations of tone the questions of a report, asks a soldier to look up and raise his weapon to the sky, he draws plans on the void, which will later be assembled with their visual counterpart on the editing island. Dumontwhile, replicates the falsehood of the television studio with movement sequences on board cars that seem to float over the void: there are no doors or windshield, just a steering wheel that the actress pretends to turn. It is precisely during a trip in a congested Paris that France accidentally runs over a motorcyclist. Nothing serious, just a slight injury to the knee of a young son of immigrants, but enough for the inner life of the journalist –whom they never stop harassing on the street to ask for a selfies or an autograph – change radically.

In a certain moment, it seems that Dumont is heading his film towards a reversal of europe 51Roberto Rossellini’s classic in which the depression of a bourgeois woman allowed an unexpected intimate and social illumination. But that’s just one of the winks of France – Spotlight, perhaps the most Godardian of Dumont’s films, although that affiliation feels secret, present for a few brief moments. France begins to cry and does so on a recurring basis; the director spends long shots recording the tears running down Seydoux’s nose and cheeks. Married to a famous novelist and mother of a young son, France weeps over a failed love affair and weeps again, in front of the cameras and alongside African migrants crossing the dangerous ocean in a makeshift boat (when the camera cuts out, however, a latest model boat transports it with great comfort and speed).

France Cries before the audience for the inclemencies of the world and alone for personal pain, and both cries are intertwined and confused. Deep down, beyond the cartoonish excesses that Dumont conscientiously builds, although not always in a pertinent way, it could be said that his latest film is a reflection on the impossibility of the news show to generate a deep, genuine empathy. Is the cinema still capable of producing it, without manual pedagogies, simply trusting in the power of images and sounds?