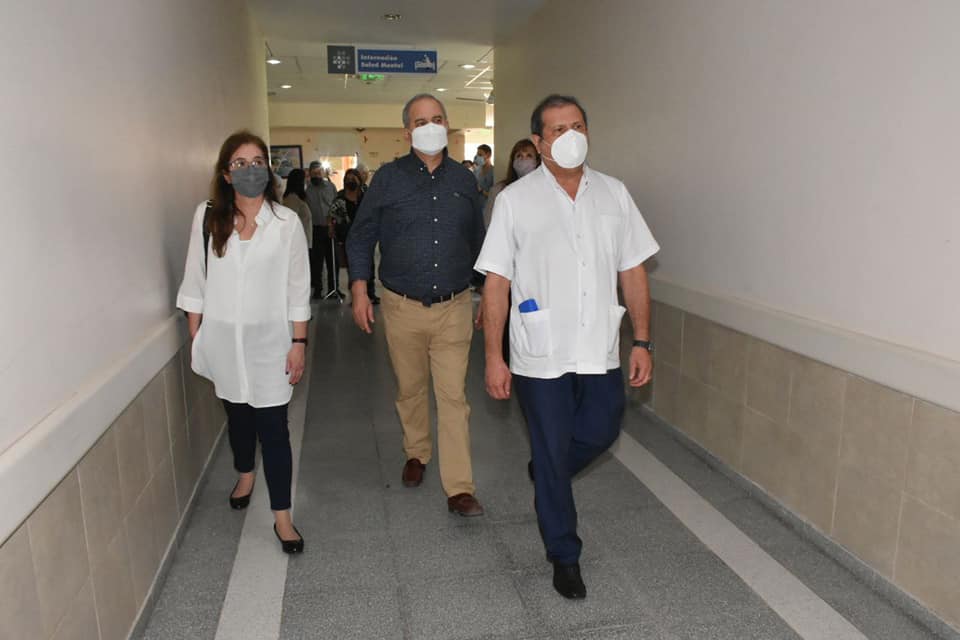 The head of the health portfolio of Formosa, Aníbal Gómez, received in his office the Undersecretary of Management of Services and Institutes of the Ministry of Health of the Nation, Ms. Edith Benedetti, who visited the province together with officials from her dependency with the aim of outlining new actions and, in turn, strengthening the work that has been carried out in Formosa, in terms of mental health and transfusion medicine.

Likewise, topics concerning mental health and transfusion medicine were discussedthrough work groups in which the provincial and national leaders participated to draw new lines of action, tending to strengthen these health axes that have been setting the agenda in the COFESA meetings.

On this occasion, the Undersecretary was accompanied by the National Director of Mental Health and Prevention, Dr. Mariana Moreno; the Director of Blood and Transfusion Medicine, Dr. María Susana Pisarello, and the honorary advisor of the Directorate of Blood and Transfusion Medicine, Dr. Daniel Fontana, who together with the provincial leaders formed working groups for the treatment of the aforementioned health axes.

In the first place, the Undersecretary of Management of Services and Institutes of the Ministry of Health of the Nation, Edith Benedetti said that “It is a joy to see the transformations that the province of Formosa has been carrying out in health matters. Really, the Governor, Gildo Insfrán, has been making great progress”, indicating that it can be seen above all in the increasingly complex care system that is willing to give the best responses to the health demands of the population of Formosa.

When referring to the approach mental healthHe pointed out that the accompaniment was directed to two key issues. On the one hand put mental health on the agendathrough the federal strategy of mental health, something very important for the application of the law and on the other hand, to define guidelines that make possible the transformation of care models, generating devices in general hospitals, to work especially in the prevention of suicides and in the problematic consumption of addictions.

On transfusion medicine, he argued that “what they are doing is very important“, assuring that they have great projects together with the province and are very enthusiastic”in all the support we can give them so that, together, we can improve and transform what is necessary. We are extremely grateful that the province opens up to work together”.

He stated then that, together with his work team, They came with the task of putting together an operational plan to adhere to the federal strategy but always taking into account the needs of the province because the important thing is “being able to work in the best possible way, even with geographic, demographic, cultural, historical and other differences, to strengthen that strategy”.

National media highlight the Bañado La Estrella, one of the 7 wonders of Argentina – NEA HOY