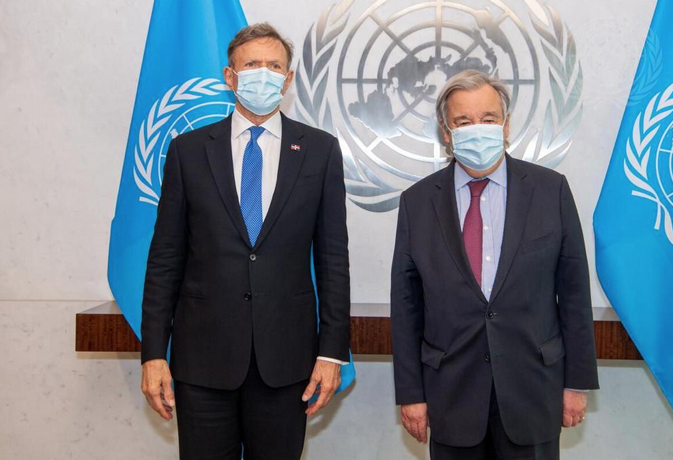 The Minister of Foreign Affairs, Roberto Álvarez, lamented the “poor receptivity existing in the Security Council” of the United Nations Organization (UN) “regarding the growing crisis” that Haiti is suffering, terrorized by the activism of criminal gangs .

During a meeting with the UN Secretary General in New York, António Guterres, Foreign Minister Álvarez expressed the concern of the Dominican Republic “for the growing deterioration of the internal situation in Haiti and the scant action of the UN to contribute to a stabilization ” in that country, according to an informative note from the Foreign Ministry.

Álvarez recalled the efforts of the Dominican Republic to convince the Security Council to expand the capacity of the United Nations Integrated Office in Haiti (BINUH) to prevent further decomposition in Haiti, without action being taken to stop it. The Dominican diplomat reiterated the commitment of the government of President Luis Abinader to the United Nations and his decision to continue collaborating with the agenda of the international organization for the sake of international peace and security.

Guterres expressed how fruitful the bilateral meeting with President Abinader at the IX Summit of the Americas was for him, noting that this conversation helped give him a better understanding for an immediate approach to the Haitian crisis, which could bear fruit in the short term. .

The Secretary General thanked the excellent Dominican participation in the different UN bodies, including the Security Council, of which the country was a member in 2019 and 2020.

NOTES
highwaymen
For more than a year, gangs of criminals and armed assailants have kept Haiti under terror, with more than 200 murders, hundreds of kidnappings and clashes with police troops.

The gangs control most of the territory of Haiti, including sectors of Port-au-Prince, the Central Plain and points near the Dominican border.

the entourage
The delegation headed by Foreign Minister Álvarez was also made up of the Vice Minister of Multilateral Foreign Policy, Rubén Silié; the director of International Organizations, María Fernanda Ortega; the permanent representative of the Dominican Republic to the UN, José Blanco; and the alternate ambassador, Joan Cedano.