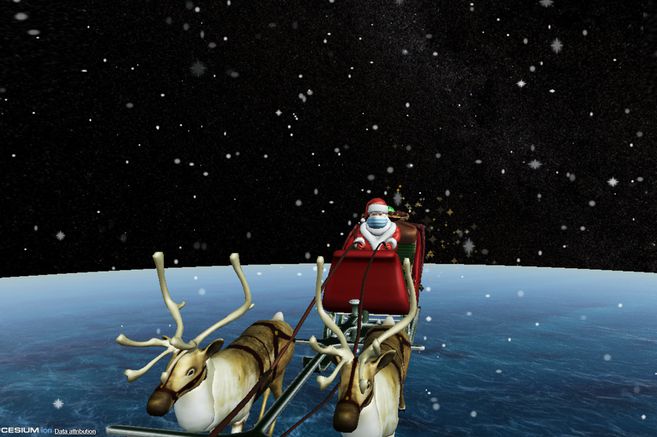 Santa’s journey can be viewed in real time. / Courtesy

The illusion of millions of children around the world to receive a visit from Santa Claus, Father Christmas or Saint Nicholas, who always comes accompanied by gifts, is one of the most shared and deeply rooted traditions in the world at this time. Its impact is such that there are even those who have the illusion of knowing where that reindeer sleigh is going.

Well, there is a page, and even an application, that shows in real time where Santa Claus is passing, that is, the places where December 25 has just happened.

It may interest you: Do you know the origin of the Christmas symbols?

This is www.noradsanta.org/en/map, a portal that has been developed thanks to the technology used by the North American Aerospace Defense Command (NORAD). It details that, around 10:00 am (Colombian time) Santa Claus had already delivered more than 1 million gifts while passing through China.

There is also the portal https://santatracker.google.com/, which shows the real-time location of Santa’s sleigh. At the moment, he is passing through Shanghai and has delivered more than 1,400,000 gifts. According to the page, Santa Claus would arrive in Colombia in about 13 hours.

It is worth mentioning that these portals have the support of companies such as Google, Microsoft, Hewlett Packard and Bing Maps, among others.

The origin of Santa Claus comes from a Greek bishop, named Nicholas of Bari, who in life was kind to the poorest. Later, as his popularity spread, the image of the paunchy man with a long beard, who lives in the North Pole and who wears red and white, took shape.