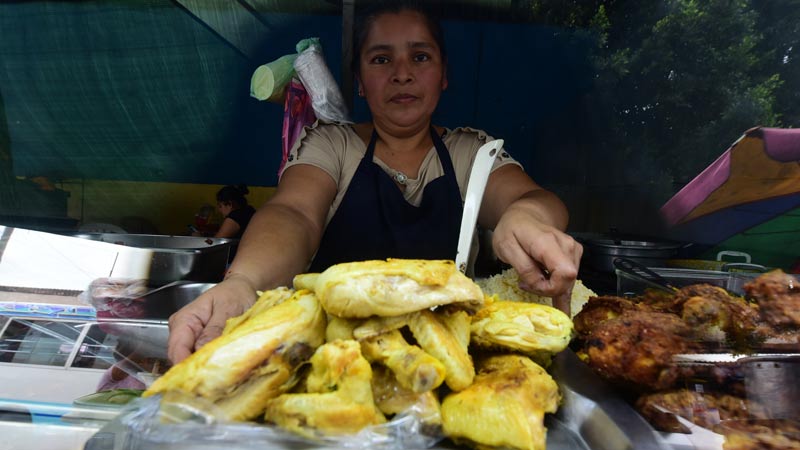 Chicken, oil, corn, beans, rice, vegetables, bread, ham, potatoes are among the food supplies that have become more expensive, as well as disposable ones.

“Everything has gone up” was the response of all the owners of dining rooms with whom they spoke during a tour of El Diario de Hoy to ask them what are the most expensive food products they are buying and how it affects their businesses.

“We are buying corn at $30 per quintal and what can one do; It’s time to make the tortillas a little smaller or a little thinner, but we keep five for $0.25, because otherwise people won’t buy,” explains Paula Escobar, who has been selling tortillas and pupusas since she was 10 years old.

Market vendors resent that the inflation in the prices of the basic basket has greatly affected their businesses and their sales. “We only sell half”, “when we tell them the prices, customers get scared”, say the shopkeepers.

Patricia de González, another of the merchants who sell food on the outskirts of the San Miguelito Market in San Salvador, assures that she has had to reduce the portions on the food plate so as not to increase the price.

It may interest you: Family uses Tik Tok to sell clothes they make in San Salvador

“Everything is more expensive. Before they gave him up to seven güisquiles for $1 and now a small güisquil costs him $0.50; The pound of chicken has risen at least $0.10 per pound and those of us who buy from them do not say why everything is so expensive, but since you have to buy and pay, one is also aware that people have little to buy”, says Patricia.

In the surroundings of the San Miguelito Market the price of the food dishes vary and can be found from $1.50 if they give you a filling of some vegetable, rice, fresh salad and two tortillas, but if you want fresh they are $0.25 more; If you buy a chicken dish with the same accessories, it can cost between $2 and $2.25, depending on the piece of chicken the customer wants, explains the merchant.

That is the strategy they use in most food businesses. “We give a little less or substitute some foods for others, so as not to be so affected. Everything has been going up since the pandemic, but the last few months have been worse and there will come a time when the price of the dish will have to be raised, because this does not improve, ”says another merchant who asked not to be quoted.

Marta Arévalo is 67 years old and all her life she has worked making tortillas and pupusas; she says that she feels disappointed with this situation, since they barely earn any income to eat.

“My age is what I have to be here, because my mother brought me three months and with this situation I feel disappointed, everything we buy has gone up: the $1 bag of lorocos now costs $4, the oil has uploaded”, comments Marta.

In other businesses near the Mayor’s Office in San Salvador, merchants like Rosa Segovia say she can’t set a price on a plate of food, because the costs of the products she buys go up every week.

“Everything has increased; one makes sacrifices because there are commitments to pay, plus here I create five jobs, apart from myself, and even if it’s little but the ladies need an income and I’ve had to increase even $0.10 or $0.15 a plate of food, otherwise it doesn’t work out “, explains Rose.

In addition: Higher interest rates in the US will make loans more expensive for salvadorans

For his part, a merchant who sells cakes in the center of San Salvador, who identified himself only as Melvin, says he has had to increase prices between $0.25 and $0.50 per cake.

Another merchant who had a sale of typical snacks in the center of the capital commented that two months ago he had to close it because he only had losses.

“I had a snack business and I had to close it, because the product is too expensive; I gave the empanadas for $0.25 and I had to increase it by $0.10, but that way people didn’t want to buy it from me; he also sold French fries, but each quintal of potatoes costs $95 and before it was $40, imagine how much it has increased! And people don’t pay for the little plate of French fries at $2, because when I take out the cost of the oil, the cheese, the sauce, the mayonnaise, the chopsticks, the salt, the disposable plate and my labor, I lose out; I had to close, ”lamented CF, who asked not to mention his name to avoid problems.

When asking merchants why they think the prices of products have increased so much, most say it is because of the rise in fuel prices. “If oil goes up, the price of the basic basket goes up. My sausage supplier tells me that since there is inflation, the cost of operation increases, so they give me the most expensive product,” explained Melvin.