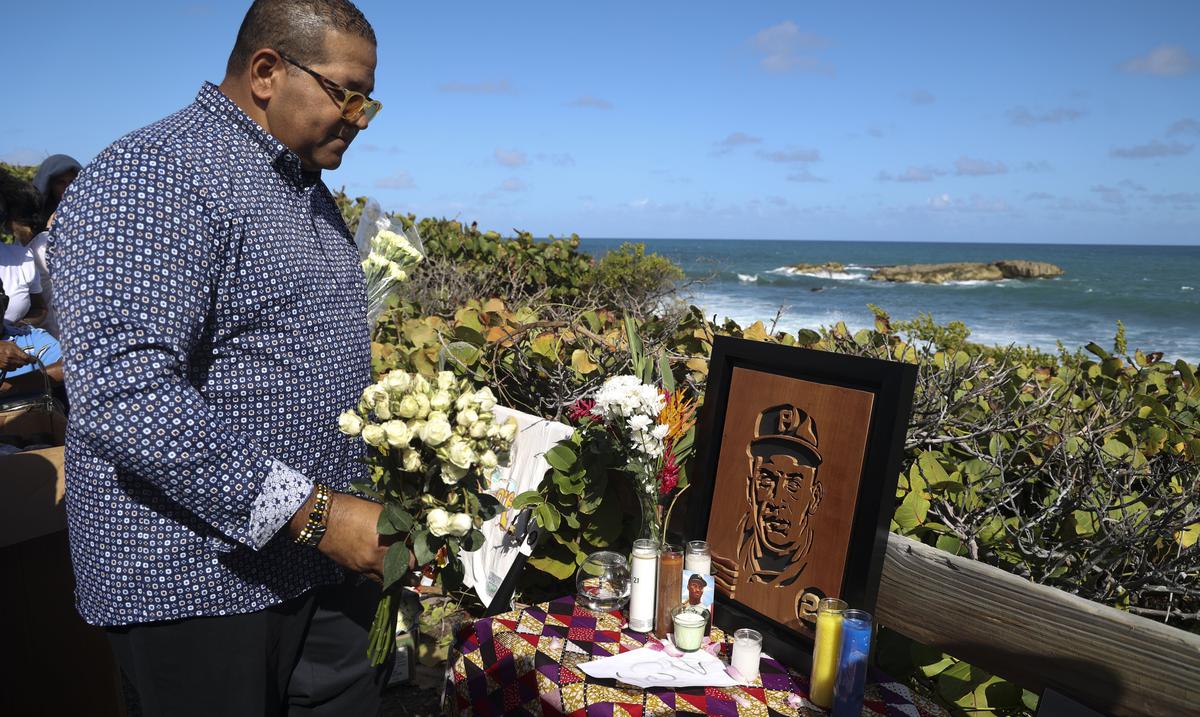 Loiza – The brothers Luis Roberto and Roberto Enrique Clemente were confused in a long hug with Ángel Gabriel Lozano in front of the furious sea where their respective parents perished in a plane crash 50 years ago.

On the night of December 31, 1972, the Puerto Rican baseball star Roberto Clemente He left on a one-way trip with Ángel Lozano, a truck driver, and three other crew members heading to Nicaragua with supplies for the victims of the earthquake that occurred in the Central American country.

Half a century later, their children met, for the first time, to honor the memories of their parents in Punta Maldonado, next to Pocita de Piñones, with a view of a rock formation that, 1.5 nautical miles from the coast of Loize where it fell the DC-7 plane into the sea.

Clemente’s body, nor Lozano’s, were found. Only the remains of the pilot of the aircraft appeared.

Tears and gestures of consolation covered the emotional scene while the drums rumbled with a plena in honor of the immortal baseball player. They had never met in the memory zone on the 31st. They always went, at different times, without bumping into each other all these years.

“It was a moment of gratitude,” Angel Gabriel told El Nuevo Día with his mother, Carmen Morales. Lozano was 3 years old when his father passed away.

“Yesterday I spoke with Luis Roberto. We had never talked about things of fate. We had a nice, cool and cordial conversation. He invited me to come. I’m a little reluctant to come, because of the feelings, but I decided to stop by and share a while. It’s never too late. Maybe time passed quickly but it’s never too late. Clearly, Roberto is the star figure. But his friend was my dad. There was a union, a family bond, even if it wasn’t there, ”he shared.

“I am a little reluctant to come, because of the feelings, but I decided to stop by and share a while. It’s never too late. Maybe time passed quickly but it’s never too late. Clearly, Roberto is the star figure. But his friend was my dad. There was a union, a family bond, even if it wasn’t there, ”he shared.

Luis Roberto, spokesman for the family and president of the Roberto Clemente Foundation, acknowledged the presence of Ángel Gabriel during his speech in front of dozens of people who gathered at the “reference point” of the death of the former Pittsburgh Pirates outfielder in Major League Baseball, in commemoration of his tragic and unexpected death at Farewell to the Year.

“I melted into a hug with him…the first time we met. Fifty years later. I remember telling mommy (Vera Zabala de Clemente) that I wanted us to be able to do something so that all the families (of those who died in the accident) could meet, talk and heal. I grew up not knowing if some of the families resented us for daddy wanting to go on that mission. We’ve each dealt with it for 50 years. I have always wanted to have that connection”, shared Luis Roberto.

Relatives of the Baseball Hall of Fame member also arrived there, along with fans wearing shirts and caps with the number 21. Among those present was former Major League player Carlos Baerga, who led a prayer.

Matino, 95, posed his body next to the makeshift altar with images of his younger brother. He placed his arms on the railing of the deck and spent minutes staring at the raging and roaring sea. At times, he shook his head in denial, perhaps regretting the premature departure of the Carolinian idol, at 38 years old.

“I’m happy but the pain never goes away,” said Matino, lucid in his thoughts, under a hot midday sun.

“It brings back some sad memories. I was here (on the coast after the accident) for 40 days. I didn’t go to work or anything. Hoping that every day something would turn up. That is why I say when they interview me, that I never talk about Roberto’s death. I always say that he is missing. Grateful to the people of Puerto Rio. They have behaved well. But, these days are very hard for me, ”he added.

Matino lost his wife, Carmen Santana, last July. His older brother on his mother’s side, Luis Oquendo, also passed away on December 31, 1954. Like Roberto, he was 38 years old.

At the end of the ceremony, a helicopter flew a short distance away and sent a shower of yellow petals that, with the wind, fell on those present. It was a memory of the wreaths thrown into the sea days after Clemente’s death.

“I grew up seeing these rocks behind me as a symbol of the closest thing, the closest place, of me having daddy. In addition to December 31, on many occasions and without anyone knowing, I have come here…”, declared Luis Roberto.

On August 31, the area in Punta Maldonado was included in the United States National Register of Historic Places. The Clemente family wants a memorial park built for fans to celebrate the life of his father by not having a grave or mausoleum to remember him.

It was a place where thousands of people gathered when they found out about the accident, waiting to find out if Clemente turned up alive or found his body while search and rescue tasks were carried out by the authorities. Visits to the rural coastal area decreased over the years. On recent anniversaries, only members close to the Puerto Rican star approach.

“It is time to open up and give all of you a place to pay respects. Not just daddy, but everyone who was with him. This is the route that planes fly over when leaving Puerto Rico (from Luis Muñoz Marín International Airport). The plans are for a passive park to be made here eventually. I don’t know how or if it’s feasible. On that rock, I would like to have a giant statue of Roberto Clemente. Let it be what everyone sees when they leave Puerto Rico. Say goodbye to those visitors. Let the whole world know that this is Clemente’s land,” said Luis Roberto.

Clemente is considered by many to be the best Puerto Rican to play in the Major Leagues. The outfielder played his entire career in Pittsburgh (18 seasons), winning two World Series, a National League Most Valuable Player award, 12 Gold Gloves and four Silver Sluggers. He was a 15-time All-Star Player and had a .317 career average.

This year also commemorated the 50th anniversary of the moment he reached hit 3,000, on September 30, 1972. At that time, he became the 11th player to achieve it, and the first Latino to reach the mythical figure in the Majors. .