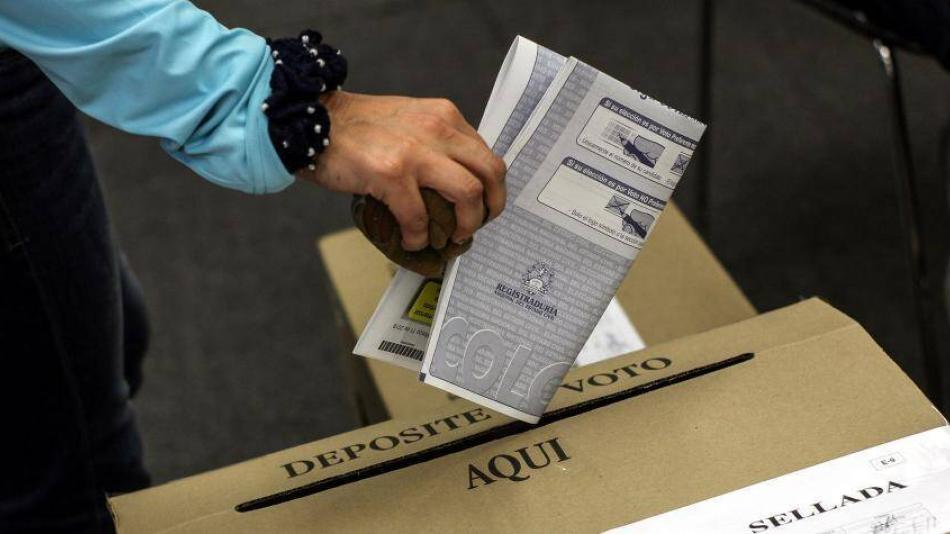 With an increase in security in some regions of the country and a report of normality by the National Registry, lColombians prepare to go to the polls this Sunday in one of the presidential elections most anticipated in recent years.

Rodolfo Hernández, from the League of Anticorruption Governors, and Gustavo Petro, from the Historical Pact, will be played this June 19 the possibility of occupying the House of Nariño for the next four years in a close and even competition in which few dare to bet who will be the winner at the polls.

(In other news: Presidential elections: This is how abstention behaved in the first round)

The national registrar, Alexánder Vegatook advantage of two different scenarios on Friday – the installation of the eight international electoral observation missions and a meeting with ambassadors and consuls from other countries – to state that all the “guarantees” are given for the normal functioning of the second presidential round tomorrow .

He added that within the guarantee action plan in Colombia, “in this administration, together with the campaigns, we allowed all counting software to be audited and drills to be carried out, all for the sake of transparency.”

“For the peace of all of you, political campaigns have appointed their auditors to the software precount and they have been able to verify the data with the accompaniment of the control entities and the observation missions”, Vega specified in the meetings.

The Registrar added that these actions seek to “legitimize the results” and that Colombia “has complete peace of mind in the election of the President of the Republic.”

The electoral entity also reported that in this commitment to transparency, an audit room was created in which 34 delegates from Petro’s campaign and 14 from Hernández’s are present.

This Saturday, the logistics for the presidential elections will be 100% ready, announced the national registrar, Alexander Vega Rocha, after explaining to the international community the guarantee and transparency plan for the elections. pic.twitter.com/9iDLXdklo0

Regarding the voting of Colombians residing abroad, which have been taking place since last weekend, Vega highlighted the “excellent” work of the consuls and said that they have not “had any complaints” of the work of the diplomatic delegations that accompany the votes.

“People are voting calmly. We understand that political campaigns, in this proselytism, come to tense the environment, but the electoral system is calm”, affirmed the National Registrar.

Precisely yesterday, a monitoring of the voting in other countries was carried out, in which Vega was present; the chancellor and vice president, Marta Lucía Ramírez; the Attorney General, Margarita Cabello, and the Ombudsman, Carlos Camargo. This exercise was carried out at the headquarters of the Ministry of Foreign Affairs.

The Ministry of Foreign Affairs reported that until this Friday a total of 119,479 citizens in different parts of the world had paid, of which 9,819 attended this Friday.

“From the Palacio de San Carlos (headquarters of the Foreign Ministry), in the city of Bogotá, the Monitoring Table for the Electoral Process of the Ministry of Foreign Affairs will continue 24 hours a day monitoring the elections in the positions authorized for the current elections around the world,” the Foreign Ministry said.

The logistics for the delivery of electoral material is also ready

Internally, another issue that was ready was the logistics for the transfer of electoral material to the 102,152 polling stations that will be held on Sunday throughout the national territory.

According to the electoral entity, these tables will be located in 12,513 positions, in which there will be 690,122 voting jurors. In around 20,000 of these tables there will be fingerprint biometrics to avoid impersonation and usurpation of the identity of citizens.

Regarding this transfer of electoral material, the registrar Vega stated that this is done in a normal way and that, even, they have had to go to “boats” and “mule back” in parts of the country where there are difficulties of entry.

In the case of Bogota, everything is ready for the electoral kits to be delivered to the polling stations from early tomorrow morning and those registered to vote in the country’s capital can exercise their right to vote normally.

In the case of the country’s capital, it should be remembered that in Corferias, the largest polling station in Bogotá, only those registered there can vote. This is because on previous occasions, some citizens have gone to this point without previously consulting their exact voting location.

The total number of voters who have exercised their right for the second presidential round is 119,479.

With the opening of the polling station in Auckland, New Zealand; Canberra and Sydney, Australia; Tokyo, Japan and Seoul, South Korea; The sixth day of voting began. pic.twitter.com/s2I8PegCFi

As for the witnesses of the two presidential campaigns tomorrow, the electoral authorities extended the deadline until today, at 5 in the afternoon, for the respective applications to be made.

Until this Friday at noon, the historical pact, platform that supports Gustavo Petro, had applied 71,056 citizens, and Rodolfo Hernández’s League of Anticorruption Governors, 52,127 witnesses.

These figures are key since, as evidenced in the legislative elections on March 13, their work of observing the actions of the voting juries allows, in some cases, to detect possible errors in the counting of votes.

From the National Government, the Foreign Minister and Vice President, Marta Lucía Ramírez, also spoke about tomorrow’s voting and stressed that “418 accredited international observers – from 33 countries – will accompany” the country’s polling stations this Sunday, and that they will also there will be “250,000 members” of the Public Force “deployed throughout Colombia to guarantee the security of Colombians.”

On the issue of security, the Minister of the Interior, Daniel Palacios, stated that the authorities are prepared “so that Sunday is a democratic holiday and also to guarantee security and tranquility to all Colombians.”

Thus, everything is ready for Colombians to go to the polls tomorrow and end one of the most intense and competitive presidential campaigns that have been experienced in recent times.

(Don’t miss: ‘Be prepared for all kinds of scenarios’: Duke on the elections)