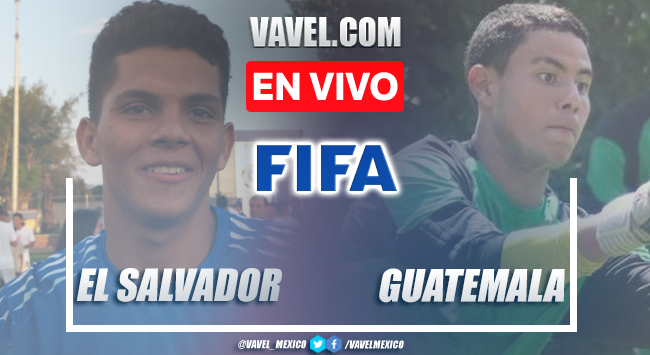 Rain of goals at the National Stadium, when it seemed that Guatemala responded, a couple of goals came from El Salvador to ensure victory.

GGGGGGGGGGOOOOOOOOOOOOLLLLLLL!!! Shot from outside the area and Harold Osorio scores the fourth for El Salvador.

GGGGGGGOOOOOOOOOLLLLL!!! Great shot by Arquímedes Ordóñez who puts the first in Guatemala.

El Salvador came out to tighten even more and score the third. Guatemala resists as much as it can.

The second half starts.

We go into the break with a partial victory for El Salvador by 2-0.

Goal annulled for offside by Eduardo Rivas of El Salvador.

Guatemala slows down and El Salvador begins to dominate the game and is already looking for the third.

GGGGGOOOOOOOOOLLLLL!!! Own goal by Adrián Rencinos, shot by Eduardo Rivas that collides with the Guatemalan defender and goes to the bottom.

The pressure from Guatemala continues although El Salvador has been closer to the second, a pair of shots on goal that crashed into the posts.

After the goal, Guatemala squeezed its rival in search of a tie. El Salvador tries to control the game in midfield.

GGGGGGGOOOOOOOOOLLLLLLL!!! Alexander Romero scores a great goal from outside the area and opens the scoring for El Salvador.

Tight start to the match, both teams begin to generate offensive plays in search of opening the scoring.

The match starts at the National Stadium.

Both teams come out onto the pitch to listen to the national anthems.

We are a few minutes away from the start of the presentation of the game and the previous protocols.

The arbitration designation for this match is as follows:
Center Referee: Selvin Brown (HON)

We are just under an hour before the match between El Salvador and Guatemala kicks off at the National Stadium. Both teams will go out in search of victory. Who will make it tonight? Follow our coverage on VAVEL.

The Guatemalan striker is going through a great moment with his team as he is one of the players with the greatest consistency within the team, this is the leader of the U-20 forward and the figure to follow in each of the matches. Ordóñez belongs to Cincinnati of the MLS, during the 2022 season he has played 6 games with the Cincinnati first team and 5 more with the second team where he has achieved a total of 2 goals and 1 assist. Ordóñez is one of the promises of Guatemalan soccer and is beginning to be considered to participate in the MLS. His mission now is to get his team into the U-20 World Cup and fight for a ticket to the Paris Olympics.

How does Guatemala arrive?

The Guatemalan national team arrives at the U-20 World Cup with the mission that its players continue to develop and show that the Bicolor team is one of the rivals to beat in the area. The youth representative must get one of the tickets to the U-20 World Cup in Indonesia and fight for a place in the Olympic Games. Some names to follow from this team are Arquímides Ordóñez, Arian Recinos and Anderson Villagrán, all these youngsters have developed in the first division of Guatemala or in the MLS. This will be his opportunity to show his high level to try to find a place in the first division and earn calls to the senior team of El Salvador. This generation should aim to be part of the Guatemalan team that will fight for a place in the 2026 World Cup and make their team one of the best in the region.

How does El Salvador arrive?

The El Salvador national team begins a new soccer process in the U-20 category, the Selecta has been growing little by little in soccer in the region and this generation will be an important part of the entire qualifying process for the 2026 World Cup. Some interesting names from this generation are Jeremy Garay, Harold Osorio and Sergio Sibrián, these are players who have been developing in the minor categories of the Alianza and in the United States. This generation should begin to show the growth that the Salvadoran team has little by little in the area. The mission for the Selecta is to get one of the 4 places for the 2026 World Cup and get into the top 5 of CONCACAF competing with teams like Costa Rica and Jamaica. El Salvador is one of the few winners of this tournament, however, the last time they lifted the title was in 1964.

Where is the game?

Good morning to all VAVEL readers! Welcome to the match broadcast El Salvador vs. Guatemala live, corresponding to the duel of date 1 of Group C of the 2022 CONCACAF U-20 Pre-World Cup. The match will take place at the National Stadium, at 3:00 p.m.