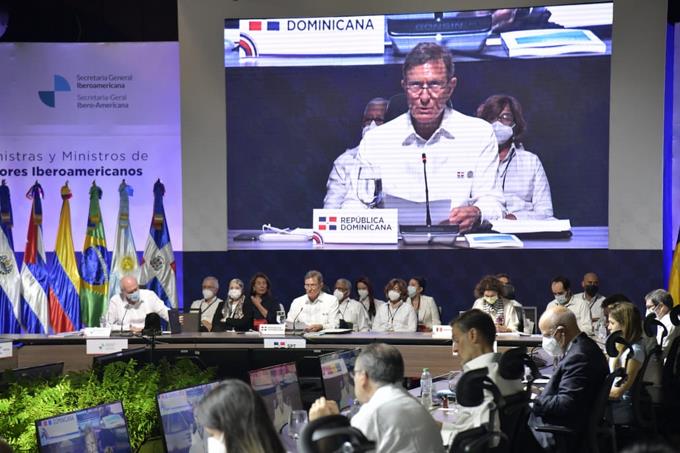 At the opening of the first meeting of Ibero-American foreign ministers, the Dominican Foreign Minister, Roberto Álvarez, warned about the dramatic situation in Haiti.

He proposed to the ministers of foreign affairs that they call on the international community to provide assistance to the sister country, so that it can overcome the serious violence and insecurity.

He advocated for the international community to sponsor a great dialogue that calls for free, fair and transparent elections in Haiti.

“It is important that this meeting of ministers of Foreign Affairs call on the international community to provide Haiti with the necessary assistance to overcome the serious violence and insecurity in that country and to hold a great national dialogue that calls for elections. free, fair and transparent, “said the Dominican Foreign Minister when delivering a speech at the opening ceremony of the meeting that is held at the El Embajador hotel.

The Foreign Minister stressed that it is the first Ibero-American face-to-face meeting to be held in two years.

The meeting is attended by ministers of foreign affairs from 22 Latin American countries, which is based in the Dominican Republic.

It was reported that they will discuss the recovery of the region after the covid 19 pandemic and define the agenda for the XXVIII Ibero-American Summit of Heads of State and Government, which will also be held in the Dominican Republic in 2022.

The conclave is part of the Pro Tempore Secretariat of the Ibero-American Conference that the Dominican Republic assumed last April from the Principality of Andorra.

The foreign ministers will also discuss initiatives and agreements that allow them to face the challenges that affect their nations due to the impact of the COVID-19 pandemic.

The Dominican Foreign Ministry reported that the foreign ministers will also advance in the selection process of the new or new Ibero-American Secretary General, replacing Mrs. Rebeca Grynspan, who left office to take over the leadership of the United Nations Conference on Trade and Development (UNCTAD).

Previous Octavio Ocaña’s girlfriend, Nerea Godínez, has been missing for 3 days; Are you hiding or did something happen to you?
Next Aracely Arámbula alerts fans in photo with oxygen tank