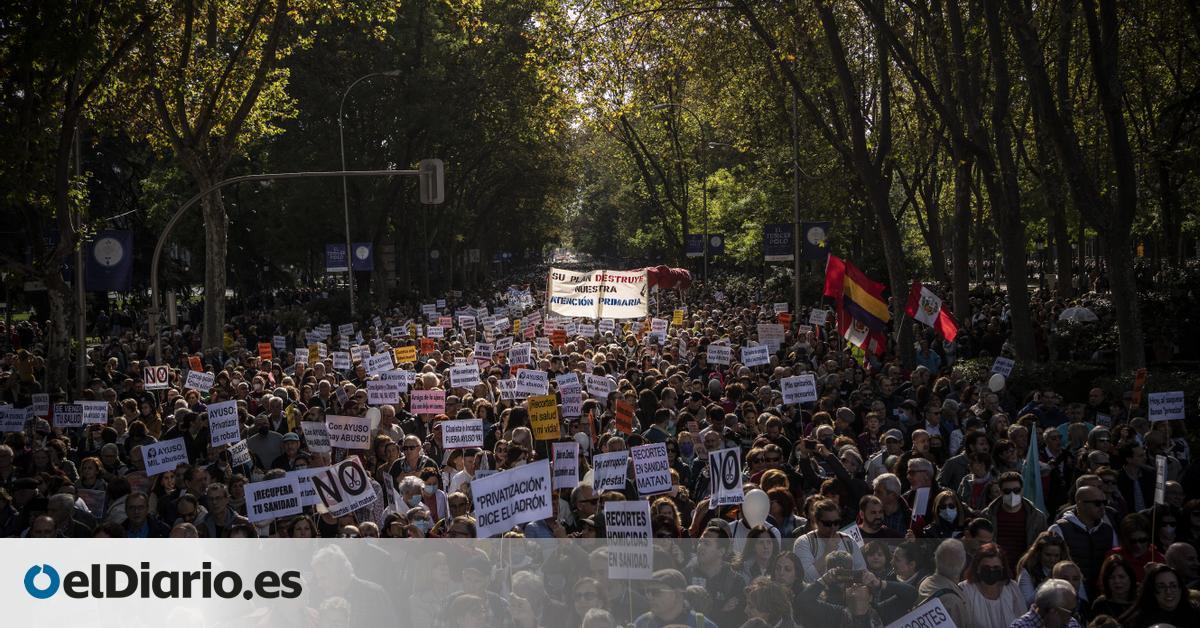 The protests are contagious. And the flame lit by tens of thousands of people who demonstrated in Madrid to denounce the mistreatment of public health by Isabel Díaz Ayuso has found gasoline in other already heated autonomous communities. Andalusia, Catalonia, Cantabria, Extremadura, Murcia, Valencia… “The demands are the same. What we want is to do our work with the best guarantees and the highest quality that we can provide to our patients”, explains the Primary Care doctor María del Mar Martínez.

“In communities like Madrid things have been done especially badly, but it is not a question of a year, nor of two. We are witnessing 30 years of bad decisions at all levels. Once a clear protest begins in one part, where the professionals say that they cannot continue like this, the rest look at each other and think the same thing”, agrees the technical secretary of Primary Care of the State Confederation of Medical Unions (CESM), Ana Gimenez.

At this moment, there is a strike underway in Madrid and a general strike called for January 25 and 26 in Catalonia. In Extremadura, the Medical Union has agreed to a similar measure due to the lack of doctors, which will take effect after Christmas. There are protests in Andalusia, in the Valencian Community and measures have been agreed to stop the conflict in Murcia or Cantabria, after a 10-day strike. In Galicia, hundreds of people took to the streets to demand improvements in a collapsed Primary Care.

“It’s about once and for all there being political will and improving both the conditions in which assistance is provided to the population and the working and remuneration conditions of professionals,” explains Xavier Lleonart, the general secretary of Metges de Catalunya, the union that has called the strike. According to data from the Ministry of Health, this is the community that dedicated the least percentage of its public health spending in 2020 to the remuneration of personnel. It was 35.4% of the total, followed by the Valencian Community (40.1%), Madrid (42.3%) and Galicia (53.9%). All of them below the national average of 44.9%. And all of them with open conflicts for this cause.

The base salary of doctors in Spain is set by the Ministry of Health, but each regional government has the ability to improve the salaries of its toilets. Or make them worse. “Some have introduced improvements and others have worsened working conditions, such as consultation shifts, the introduction or not of supplements, the prices of the hour on call, etc. Everyone has a certain share of responsibility in the situation that Health is going through and, now especially, Primary Care throughout Spain ”, explains Giménez.

María del Mar, who is the national representative of urban Primary Care of the General Council of Official Colleges of Physicians, is also a family doctor at a health center in Ciudad Real. “I have an agenda of 50 patients, from eight in the morning to three in the afternoon, with my patients, those of colleagues who are on leave, on leave or off duty and who do not cover themselves,” laments the doctor.

Is it reasonable for a family doctor to have 60, 70 or 80 patients a day on his schedule, with 6, 7 or 8 patients at the same time? At best you have the feeling that you are on an assembly line where you put the screw and it’s over

It is a repeating situation. Saturated agendas and health workers working piecemeal. “Is it reasonable for a family doctor to have 60, 70 or 80 patients a day on his schedule, with 6, 7 or 8 patients at the same time? How do you manage that one day after another? In the best of cases, you have the feeling that you are on an assembly line where you put the screw in and it’s over”, reasons Lleonart.

Precisely, Catalonia was also below the average in 2020 (13.9%) in terms of the percentage of the budget for public health dedicated to Primary Care. It dedicates 13% of the total, above Castilla-La Mancha (12.7%), the Balearic Islands (12.1%), Galicia (11.6%) and Madrid, which is at the bottom with 10.7% and an indefinite strike of this class that has already reached ten days.

Not even the community that allocated the most, Andalusia, comes close to the 25% investment in Primary Care recommended by the World Health Organization, as denounced by Amnesty International. The data for 2022 are not more positive: “It is true that investment in Primary Care, among the communities for which there is disaggregated information, grows in total in the 2022 budgets with respect to the 2021 budgets by 8.47%, but this figure is practically similar to the increase in health spending in primary care between 2019 and 2020”.

“Although this slight increase is positive, Amnesty International considers that it does not correspond to a firm commitment to reinforce Primary Care. This amount hardly has an impact in terms of recovery of the investment in the most economically marginalized care level of the National Health System, although there are positive examples such as La Rioja or Catalonia that lead the investment ranking”, they pointed out. Thus, these communities have turned the ranking around in two years with an increase of 22.52% and 16.83%, respectively.

“There is a very high healthcare pressure in all Primary Care, although there are communities that have more pressure than others. Where there are more is in Andalusia, Extremadura and Castilla y León, in the area of ​​the southern periphery of Madrid and there is also the Valencian Community and Murcia, as well as other areas closely associated with depopulation. In Aragon, for example, Zaragoza has a lot of care pressure, but Teruel or Huesca, hardly, “says the president of the Spanish Association of Family and Community Medicine, Remedios Martín.

According to information collected by Civio, regarding the average number of daily patients attended by each professional in 2022 by health areas, two of the three areas with the highest healthcare pressure are in Alicante, with 43.3 and 39.7 patients per day. In the middle, that of Sevilla Norte, with almost 40. Among the 20 most saturated, only queries from Murcia, Andalusia and Alicante appear, as well as one from Extremadura and Aragon. All above 37 citizens served each day, on average.

This weekend, thousands of people have taken to the streets in Andalusia, in what is the first major demonstration for the policies of the Government of Juan Manuel Moreno, to demand that it stop the growing privatization that, according to thirty groups, is deteriorating public services.

In Murcia, the unions had also announced mobilizations this month, which were stopped a week ago with an agreement with the Ministry. The pact goes through the limitation of the schedules to 35 patients a day and the creation of 123 primary medicine places. The protests were not new. In May, 77 of the 86 coordinators of the Region’s health centers demanded improvements in this first level of care. In Cantabria, Primary Care doctors also postponed an indefinite strike, after ten days of strike, after reaching an agreement with the council that limited schedules to 35 patients.

Both Murcia and Andalusia are also the communities that occupy most of the first positions in care pressure by pediatric health areas, according to data from Civio, to whom information has not been provided by Cantabria, Catalonia, Galicia and Asturias. In this list, the first positions are occupied by the areas of Jaén and Córdoba, but with a last name: Sur.

“In neighborhoods where the socio-sanitary level of the population is higher and other systems are accessible, family doctors are attending an average of 35 patients a day or even less. Then there are the peripheral neighborhoods, in the south of the big cities, where crises always begin, where there has always been a lack of doctors and where the population has nowhere else to go. In these health centers, 40, 50, 60 patients a day are being treated… or even 100 at peak times, such as flu or bronchiolitis epidemics”, explains Giménez.

“We have hit rock bottom”

The ideal schedules to care for patients optimally, according to the sources consulted, are around 35 patients a day and 10 minutes to attend each consultation. “They usually start like this, but throughout the day they get more visits and what starts with 35, ends up being 50”, exemplifies Martín, who points out that, in addition to the overload of each professional, he has to assume those of other colleagues who are not there or who have been sick, because they are not covered.

“There are health centers with 15 doctors, but if seven are missing, the population of those is distributed among the doctors there are. An overload occurs, and also you do not resolve the same. If you have your consultation, you know your patient and you are doing a longitudinal assessment. Making patients, especially the elderly or those with chronic problems, see a doctor every day is neither efficient nor does it solve their problem ”, he continues.

The demands of the toilets, mainly those of Primary Care, have been repeated for years. Even decades. The 10 minutes per patient have become a leitmotiv recurring, which has now captured the spotlight. “We have hit bottom, everyone knows that there is a breaking point,” they consider from the CESM. “The retirement of the baby boom and more and more doctors are missing. We are at the end of the road, at the critical point where healthcare will no longer have a remedy”, they agree from Metges de Catalunya.

From this union they point out, however, that precariousness affects most specialties, but there is one that is particularly affected by the decline in Primary Care. “I am an assistant in the emergency service of the Terrassa hospital and I find myself in a situation of collapse and saturation every day. We received the blow of immediate attention, because patients who want to see their family doctor are given an appointment in 10 days and for those who need a specialist it takes months,” says Neus Muños, who will go on strike in January to be able to “do their job better” and because “patient safety is not guaranteed”.

Previous This is how the table of scorers of the Qatar 2022 World Cup remained, after the first stage
Next What happened to Felicity Jones: she was one of the big stars, but she has only had small roles for years – Movie news