What is happening with the price of Bitcoin? It is a question that many are asking these days. According to Alexis Texeiro, Corporate Analyst at Global Markets, and Independent Data Analyst for Bit2Me, Bitfinex’s whales and market developers know more than those whom he defines as “the scared crowd.” He thus revealed it through linkedin.

“The whales and market developers at Bitfinex surely know better than the scared mob. They currently have an incredible 108,000+ open long trades running,” he noted.

Later he expressed: “This platform, creators of Tether and USDT first as an experimental method and then as tools for the masses, moves the market as it wants.”

He also shared the following graphic. 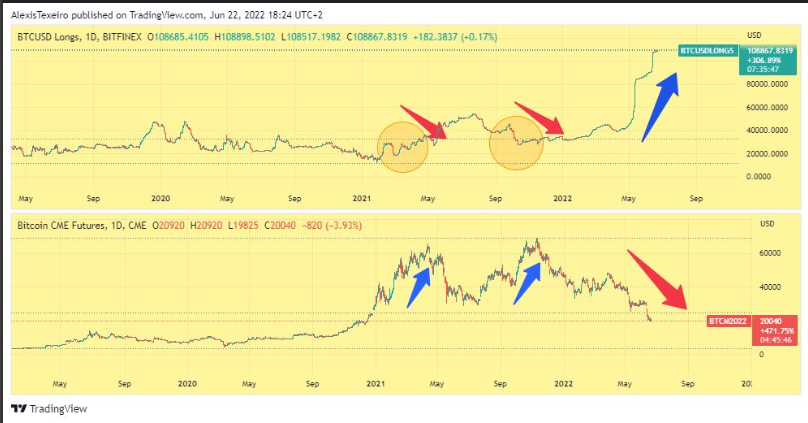 “In the chart we can clearly see that they always move contrary to the movement of the market. When we went to the first TOP they opened short, when we fell from the first TOP, they opened long. The same thing happened in the second TOP. What this happening now is unprecedented, the longs on Bitfinex have gone absolutely parabolic.”

His reflection ended with some questions: “Are they clearly positioning themselves for a market explosion or are they somehow accumulating positions as a cover for a bear market? To suit the consumer.”

In this context, on June 15, the artist known as Miles J Creative, expressed himself on Twitter with these words: “So, did you think that the Saudis were getting rid of their longs on Bitfinex with the price at 20k?”

So you were thinking the Saudis were dumping their longs on Bitfinex with price at 20k?