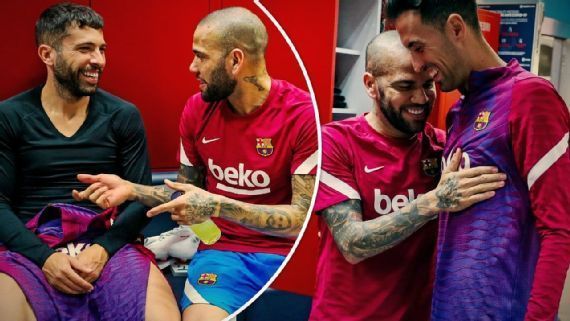 details of the return of Dani Alves to Barcelona

Dani Alves will be officially presented as Barcelona’s reinforcement this Wednesday, but the newspaper Sport revealed a mystery surrounding the player’s return to Spain: the number that the Brazilian will wear in his second stage at the Camp Nou.

According to the Catalan newspaper, the winger will use number 8 of the Barcelona, which was used by none other than Andres Iniesta, who left the club in 2018 after winning nine titles in The league and four of Champions League with the culé team.

The one who also used number 8 recently was Arthur. The Brazilian was hired by Barcelona after standing out in the Copa Libertadores 2017 with the GuildHowever, the midfielder failed to establish himself at the Camp Nou and was transferred to Juventus.

The number 8 has no owner since the departure of Miralem Pjanić, loaned this season to Besiktas after being ‘erased’ by the former coach Ronald Koeman.

This will be the fifth different numbering that you will use Dani alves on Barcelona. After wearing the number 20 upon his arrival in 2008, the Brazilian would carry three different numbers: 2, 22 and 6. The latter, even after the departure of Xavi, who will now be your coach.

In addition to the new number that he will wear on his shirt, the newspaper Sport has revealed this week other details about the return of the carioca to Spain. According to the newspaper, the right-back agreed to have the lowest salary of the entire squad to finalize his return to the Barcelona.

The Brazilian’s salary could be increased if he manages to meet some of the goals stipulated in the contract. However, the bonuses are tied to obtaining degrees, making it much more difficult to achieve the objectives. It should be remembered that the minimum wage in LaLiga is around 85,000 euros per season.

As the agreement of Alves is for six months, this means that he would earn around 42,500 euros for his contract, which runs until June 2022. In the agreement between the parties, it was predetermined that there could be an extension of the link.

Dani alves He will be able to make his debut in the Spanish Championship when the transfer window reopens in January. Until then, the Brazilian will try to improve his physical condition at the club’s facilities.

The first game of Barcelona in 2022 it will be against Mallorca, on January 1, away from home.

Previous IBM creates the most powerful superconducting quantum computer in history | Science and Ecology | DW
Next Who is Debbie Aflalo Vargas, the new Dominican representative to Miss Universe?