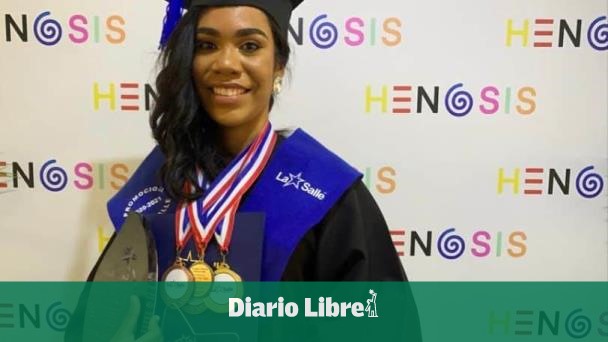 Passionate about sports and mathematics, at her young age, Daniella Pillier She has fought not to be one more. She was born into a low-income family in Higüey, and grew up in a neighborhood where you could only be a “thief, a prostitute or sell drugs,” but she assures that her goal was always to fight to show that there was something more than that. .

“Villa Cerro was always talked about as a place where nothing good could come from (…) So I thought, why if I don’t do that, they describe me as if I were like that, and I worked so that today they say she is different and it doesn’t seem like she comes from there,” Daniella tells Free Journal.

The 19-year-old will move to the United States at the end of August, where she will be part of the athletics team at Smith College, a private university specialized in liberal arts, and one of the most prestigious for women, which is located in Northampton Massachusetts, where you will study statistics and data science with a concentration in global financial institutions.

““My family has always told me that to achieve big things, you have to think big””Daniella PillierDominican athlete“

“Here in the Dominican Republic you are either a high-performance athlete or you focus on working, and specifically at Smith College, which was the one that felt the most interest in me, since I communicated with the coaches before applying, there they They offered to be part of the track team and somehow give my college application essay a boost,” she said.

Daniella said she also reached out to track and field coaches from Harvard University and MIT, seeking to open doors to achieve her dreams. In total, she applied to 10 universities in the United States.

His way “down the track”

Athletics came to Daniella at a very young age. When her coach, Jesús Tapia, discovered that she played soccer on the men’s team, he caught her attention that she was the only girl on the team, and invited her to be part of her athletic team.

“It was because I really liked sports and if the other girls weren’t interested, that wasn’t going to stop me from doing it. So my coach, Jesús Tapia, invited me to be part of the athletics team that he was organizing. I was the youngest, and two months later I qualified for my first national athletics tournament”, he stressed.

Since her childhood, Daniella has managed to participate in national athletics tournaments, in the school cycle and higher championships, in the 100 and 200 meter dash, she was part of the women’s and mixed champions relay and podiums in individual events in the national school games in those who participated.

Last year, after graduating from high school, Daniella managed to move to Santo Domingo to improve her level, exploit her potential in athletics and be at the level of competition in the United States.

The young woman completed her secondary studies at the Liceo Juan XXIII De La Salle School, graduating with a bachelor’s degree in the academic modality of Statistics, Mathematics and Technologies.

“In this semi-private school there were two exits in high school, and I have always liked difficult things and the most difficult exit was mathematics”, said Daniella.

During his school year, he received national academic and sports distinctions, graduating with a cumulative average of 98.2, the highest of his class.

He contributed to community service as a Lasallian Leader, Rotaract Higüey, where he led educational workshops for students and adults in his community.

Within his school he was part of the track team and the flag-bearing squad. He participated in Olympiads in mathematics, biology, social sciences and internal United Nations debates.

The distinctions he has received are related to honor, merit, service and awards from his school, the sports department of the Mayor’s Office of Higüey and the Regional Educational Directorate 12-01 and local foundations.

Daniella knows that her achievements are rare for a low-income person like her, but nothing stopped her. She assures that her family and friends have been essential to get ahead.

“They have always told me that to achieve great things you have to think big, when they saw that this was a reality, something that does not happen in Higüey, I would say that never for the environment in which I live, they felt proud , and they saw the potential that others can have if they put in the same effort that I put in,” she said excitedly.

*Write your concerns, suggestions and comments to redaccionusa@diariolibre.com.

Bachelor of Social Communication, with a Master of Arts in Journalism from the University of Puerto Rico. She currently coordinates the Diario Libre USA section, an expert on issues of the Dominican diaspora and the US.