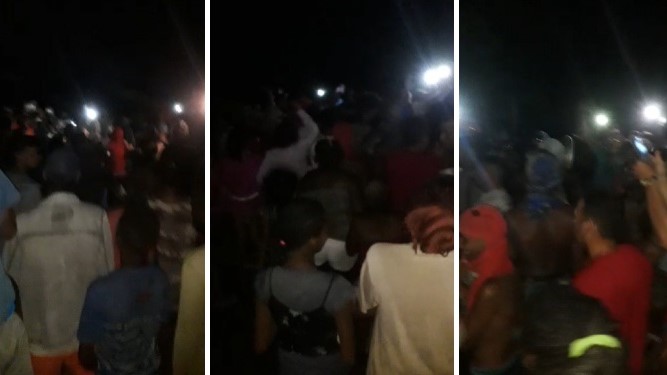 In a few hours, it will be 28 years since the social explosion that occurred in Havana and that we know today as “the Maleconazo.” These spontaneous protests have been regularized in Cuba to the point that It is not exceptional that every night, especially in towns that suffer long blackouts, an indeterminate number of people carry out cacerolazos and launch slogans against the regime.

The events of August 5, 1994explained for a long time by the regime as the confluence of the crisis of the euphemistically called “Special Period” and the alleged incitements to emigrate from Washington, they are everyday today without the official media making reference to them.

The historical circumstances are similar, but not identical: In addition to the serious shortage of food, medicine and basic necessities, today there are the worst blackouts that Cubans have faced since the 1990s.

To all this, Fidel Castro sought the solution of taking steam out of the boiler by opening the maritime borders, so that everyone who wanted to escape could do so. Instead, the micro-bursts of recent weeks come as Cuba faces its largest exodus in more than half a centurywith figures even higher than the Balseros Crisis after the Maleconazo, or its great predecessor, the Mariel exodus.

The protests these days are for multiple reasons, although in most cases they break out demanding a solution to the blackouts. But to this claim are added the relatives of prisoners of 11J who demand their release, mothers with children who demand decent housing, and with them, the cries of “Libertad”, “Díaz-Canel singao” and “Down with the dictatorship” are raised. “, that they connect recent events with the repudiation of the regime that became explicit a year ago in dozens of Cuban cities.

The protests are difficult to map today. The demonstration in Los Palacios, in Pinar del Río, on July 14, has been followed by protests in more than three dozen cities and towns in at least 13 provinces.according to citizen reports verified by independent media and activists on the ground.

According to the DeFacto verification project, of the digital medium The touchthe first proven protest of the current energy crisis took place at the Ignacio Agramonte University in Camagüey, whose students launched the slogan that has since been heard in other places: “Turn on the current, pinga!”.

According to that analysis, since then and to date there have been 25 verified protests, which have been increasing over the days. For this reason, the nights of last August 1 and 2 saw the largest number of simultaneous demonstrations.

DeFacto reports that the day after the protest at the University of Camagüey, residents of Manzanillo went out to demonstrate after more than 12 hours without electricity.

In mid-July the panorama of social fatigue worsened, and dozens of residents in Baracoa, in Guantánamo, demonstrated on its Malecón on the 15th. On the 19th, the situation was reproduced in the town of Rosalía-Constancia, in the municipality of Abreus, in Cienfuegos; on the 22nd in Colón, Matanzas; in Caibarien, Villa Clara; in the Lili neighborhood, from Sagua la Grande, Villa Clara; and in Jagüey Grande, Matanzas.

The night of that day, the office of the Electrical Company of Tapaste, Mayabeque, was set on fire by unknown individuals.

Granma was added to the list on the 23rd, when residents of the La Marina neighborhood in Campechuela publicly protested. And on the 30th there was a general outburst that included Central Australia, in Jagüey Grande; the town of Covadonga, in Aguada de Pasajeros, Cienfuegos (where, according to DeFacto, the store at MLC Arcoíris was stoned); and Bauta, in Artemis.

The very 1st of August, dozens of residents of the Vista Hermosa district, in Santiago de Cuba, took to the streets to protest in broad daylight after suffering constant blackouts, and six relatives of political prisoners of 11J demonstrated before the Chair of Havana demanding the release of their relatives.

Tuesday 2, Dozens of women with children closed off traffic in an area of ​​the National Highway near the El Comodoro refugee campat the Calvario-Fraternity Popular Council, in Arroyo Naranjo, Havana, demanding the presence of Miguel Díaz-Canel.

If we add to this the dozens of posters against the regime that appear in public places throughout Cuba and the alleged accidental fires that occur in state entities, plus the dengue epidemic that is only expanding, the situation is heated to extremes yet to be imagined.

Does the regime have a remedy on this occasion for a social crisis for which it has no other solution than to democratize the country and hand over power? The way out now lies with the Cubans in their hands. And everything seems to indicate that they have already realized it.