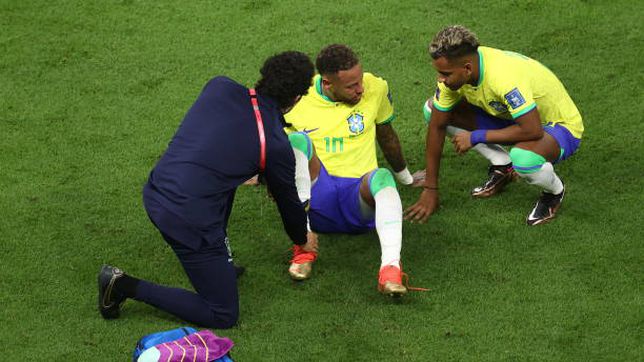 Costly victory for Brazil in their debut against Serbia; Neymar injured

After being the protagonists in the Conmebol Qualifiers heading to the Qatar World Cup 2022the Brazil’s selection He had the mission of presenting himself in a great way as one of the main candidates to take the title in Arab lands, but there is an issue that worries them too much, and that is that Neymar had to come out of exchange due to an ankle injury.

The Scratch du Oro was able to beat its Serbian counterpart with a double from Richarlison, who started as the starting striker for technical director Tite, in an attack that he completed along with Neymar, Vinicius and Raphinha. With this victory over the Balkans, Brazil added three points to take the lead in Group G ahead of Switzerland, who will be their next rival on Monday, November 28.

The situation seemed to be unbeatable for the Brazilians, who, starting off on the right foot, hit the table to confirm themselves as a leading team in the World Cup, although unfortunately for his cause now they will have to wait due to the extent of the injury suffered by the Paris Saint-Germain star.

In a match in which the player from Santos from his country was able to collaborate in his team’s first score, after setting up Vinicius Jr prior to his shot that the Serbian goalkeeper covered but pushed the Verdeamarela number ‘9’ on the rebound , and of noticing very participatory throughout the attack front, Neymar was forced to be substituted in the 80th minute, moments after he lay down on the pitch and called for medical assistance..

The situation worries all the followers of the ’10’ from Brazil, since throughout his career he has experienced problems related to his ankles and His history with injuries in World Cups reminds us of when he had to miss the rest of the 2014 World Cup due to a violent tackle from Colombian Camilo Zúñiga that caused him a serious back problem. that it was about to cost him to walk again.

What would be the extent of Neymar’s injury?

Despite the fact that the medical part of the ankle problem suffered by Neymar is unknown, The PSG star could be caught crying on the bench of his team and when going to the dressing room tunnel the cameras captured the swelling in that area of ​​the right foot. His continuity in the World Cup will now be an important issue in the next 48 hours, as the Canarinha doctor described it as a trauma for which they will wait to have more in-depth studies.according to Miguel Delaney’s ‘The Independent‘.