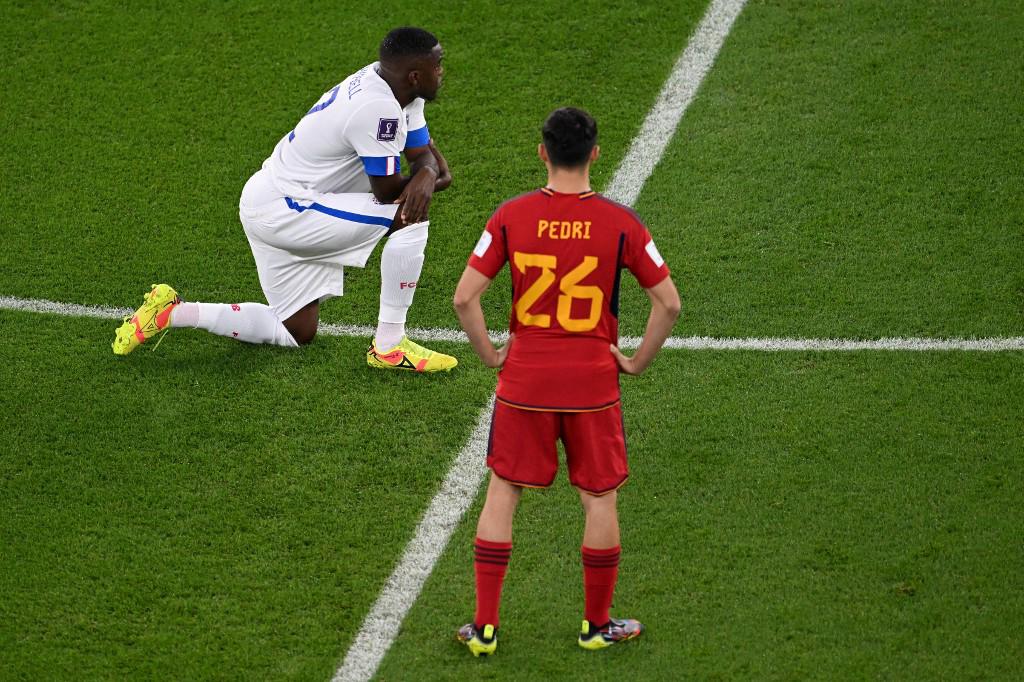 Costa Rica, representative of Concacaf, is already playing its first match against Spain in the Qatar World Cup

5′ Oops! Dani Olmo missed a clear one. The Spaniard received a lobbed pass from Pedri, finished off, but his shot went wide of Keylor Navas’ frame.

3′ Joel Campbell’s first foul, the Tico came back to pick up the ball and Laporte took it down.

two’ Spain’s first entry from the right and Ferran Torres gets a corner kick.

9:59 a.m.: Total euphoria in the anthems, now the captains Keylor Navas and Sergio Busquets are going to the draw.

9:57 a.m.: Now the national anthem of Costa Rica is playing, the third Concacaf team to appear in Qatar 2022.

9:56 a.m.: The Spanish anthem plays at the Al Thumama stadium.

9:55 a.m.: Both teams enter and the national anthems come.

9:54 AM: Everything is ready for the third meeting this Wednesday.

9:34 a.m.: Spain is already warming up. Pedri will play his first World Cup.

9:31 a.m.: This beautiful tic is decorating the stadium and our minute by minute.

9:30 a.m.: This is how Costa Rica’s dressing room looks before the game against Spain.

9:28 a.m.: They are not so Spanish, but they have their favorite for the match against Costa Rica.

Luis Enrique’s renewed Spain will start its journey in the World Cup in Qatar on Wednesday against a Costa Rica that continues to trust the heroes of Brazil-2014.

In charge of the third youngest team in the World Cup, with an average of 25.8 years, Luis Enrique faces his biggest test since he took over the Reds after the disappointing elimination in the round of 16 in Russia-2018.

Spain, semifinalist of the last European Championship and finalist of the League of Nations, where they lost to France in October 2021, begins its World Cup tour in Qatar wanting to repeat the success of 2010 in South Africa.

“I think we have a very good team to do great things and I think we are going to have a great World Cup,” winger Nico Williams, 20, one of the representatives of the new batch of Spain, said in an interview with AFP.

Among the new Spanish generation, midfielder Pedro González ‘Pedri’ stands out, who since his emergence with Spain at the beginning of 2021 has become an essential for the core of La Roja.

Compared to Andrés Iniesta, the South African hero, for his touch and his vision of the game, Pedri will be one of those present on Wednesday on the pitch of the Al Thumama stadium in Doha.

As in Barcelona, ​​the youngsters Pedri and Pablo Paéz Gavira ‘Gavi’ form the guard of veteran Sergio Busquets, 34, the last survivor of the squad that lifted the World Cup in Johannesburg twelve years ago and who continues to be the pillar of the Red in the center of the field.

“I don’t see a better pivot than ‘Busi’ (Busquets) to play what we want to play,” Luis Enrique said when publishing his list of chosen ones for Qatar, assuring that “my goal is to convince ‘Busi’ to play another World Cup plus”.

The captain of La Roja will be in charge of marking the times against Costa Rica, “an opponent that is going to be very intense, that is going to lock us up,” according to Spanish striker Ferran Torres.

The Barça winger will surely be one of those in charge of helping Álvaro Morata in the attack, already recovered from the cold that prevented him from training on Sunday.

Ferran, at 22, is another of La Roja’s young assets to face Costa Rica, a team that has failed to beat Spain in their three previous matches.

The ‘tico’ team will seek to turn the statistics around in the best scenario and reap three gold points in the complicated Group E, in which another world champion, Germany, and Japan await them.

The group trained by the Colombian Luis Fernando Suárez once again rests on the last survivors of the feat of Brazil-2014, when they reached the quarterfinals after being first in a group with England, Italy and Uruguay.

Paris Saint-Germain goalkeeper Keylor Navas is the great leader of a group that will play their third World Cup in a row.

“Some of us here have lived that experience. Now we have to make younger people see that it can be achieved, ”Duarte said on Sunday, before participating in a training session for his team.

“Spain It doesn’t have the same intensity as it has for a long time. By taking so many people to attack, he leaves his defensive zone vulnerable and we are going to try to hurt him on that side”, advanced defender Francisco Calvo.