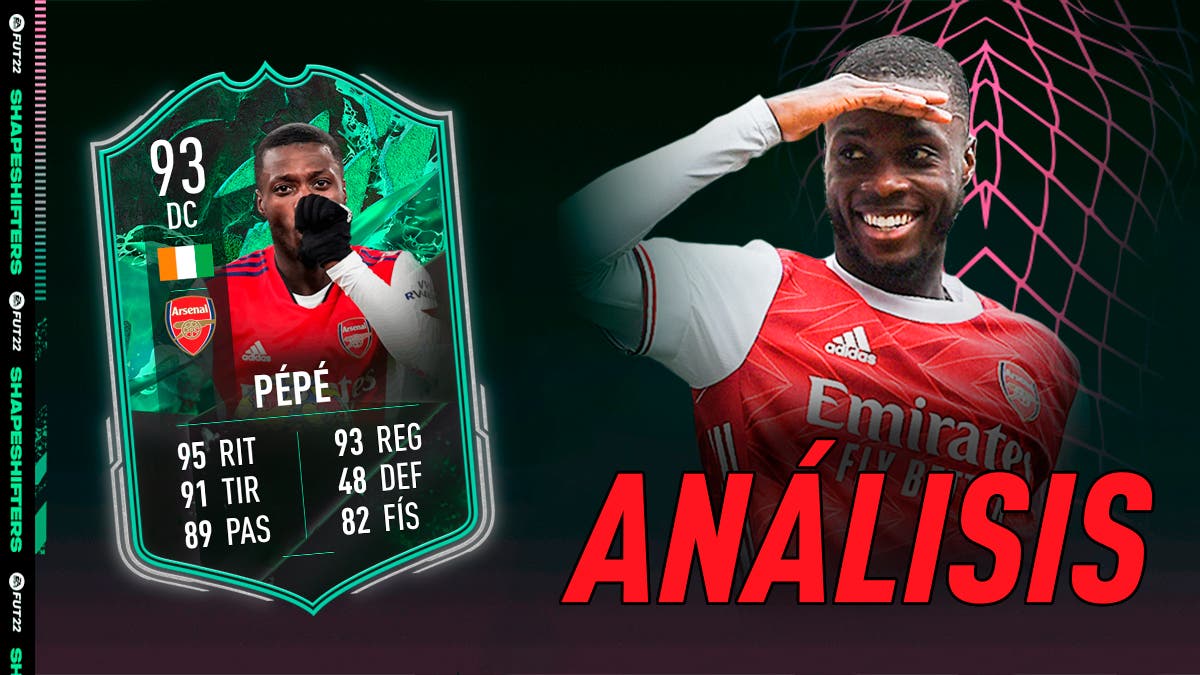 Pépé Shapeshifters is one of the two free players that accompanied to the first team of the event. His objectives do not expire in FIFA 22 until June 24, he has quite high statistics and four stars for both skills and bad leg. Will he be a valuable attacker, or is it easy to find even more useful options? Let’s talk about it.

We are facing the typical case of a player who It more than meets the numbers, but loses value because of its stars. By not reaching five neither in skills nor in bad leg, in the last meters it will not be as unbalancing as other alternatives. Something that, for example, we already discussed about your teammate Alexander Lacazette End of an Era. And since the DC position is so important in Ultimate Team, our recommendation is to find someone even more special. With similar stats and an extra star.

On the attributes there is not much to criticize. The balanced 95 in rhythm is great because it will reach perfection if we apply Falcon or Engine. He’ll be quick in any situation, he’ll keep his cool all match for 95 stamina and he shouldn’t be too vulnerable thanks to his physical condition. Although the 92 balance might be higher, combining 85 strength with his 1’83 height will allow him to better withstand struggles. He won’t be the classic wimpy footballer during long runs.

Whereas, over short distances, that wingspan should make it even less unbalanced. We can’t expect top performance in one-on-one situations against central defenders. Although his dribbling numbers are more than fair, he doesn’t impress with them and doesn’t match them with big stars. Since he doesn’t reach five in skills or bad leg, he won’t generate his own scoring chances as easily as other cards in FIFA 22.

Though if the situation is clear, he should hit very often thanks to his shooting statistics. Naturally, Pépé Shapeshifters combines 90 Positioning, 91 Finishing, 93 Shot Power, and 90 Long Shot. Good stats that will reach or be close to perfection when applying Falcon as a chemistry. And despite not standing out for his watermarks or his right-handed shot, at least he does have “Quality Shot”.

While with the pass he meets without surprising. It is true that his long pass drops to 80 but, due to his position, he will take more advantage of the 90 in vision and short pass. Numbers that are no longer great positive news, we have become accustomed to seeing them in most attackers. But in any case, they are adequate to circulate safely and not to fail too much with the assists.

So Pépé Shapeshifters doesn’t suffer from any major weaknesses and meets the vast majority of stats. That is why it should offer quite acceptable performance. But since he does not reach five in skills and bad leg, we do not consider him a top footballer. Y since the DC position is so important in our results, the ideal would be to use even more unbalanced cards. With more resources to mislead the enemy center-backs and generate scoring chances of their own.

Pépé Shapeshifters can be good if you need an Ivorian inside attacker to give chemistry to other players of their nationality, if you want to form some hybrid with people like Zaha or Fofana. Also if your budget is low and you prefer to save the coins to make other transfers. In those cases, you could put the Arsenal footballer in your eleven and place him as a winger during matches. While some band player (with five in skills and / or bad leg) would be the one who would occupy his natural position. But we do not advise playing with him as DC.

And if you have some coins to buy transfer cards, in the market we find competitive Premier League options that are not expensive. For example, Diogo Jota TOTS worsens in certain aspects but reaches five bad legs. In the final meters, he will have more resources to generate clear scoring situations.

Odegaard FUT Birthday is also not bad if you don’t mind being limited in long runs. If you place someone dangerous on the counterattacks next to him, you can enjoy his quality in the static attacks. Because in one-on-one situations, he’s still interesting thanks to his five skills and bad leg.

Smith-Rowe Future Stars and Martial Winter Wildcards are other acceptable alternatives, though they are somewhat rougher on the dribble. While, if you can afford anything over 300,000 coins, Firmino FUT Birthday would be a great signing.

So Pépé Shapeshifters isn’t a must-have in Premier League rosters and we found inexpensive cards to replace him. Due to the importance of his position in Ultimate Team results, we advise against using him as a striker. Only as a raid player if your budget is limited and you want to save some coins. You could use him as a winger, while your IE or ED would go inside during matches.

And logically, you can make their objectives to cheapen some SBC. If it has no value in your template, it is good to save some coins because it reaches 93 on average.

–Hawk: If after testing him with this chemistry you notice that he misses too much when shooting, then you can apply Hunter so that he reaches 99 in completion instead of staying at 96. But first we recommend this style because with it he gets a +5 in strength. In addition to that his 90 in long shot reaches perfection and he will be able to take advantage of it even more thanks to the “Quality Shot” trait. He also raises his balanced Pace to 99 and 90 Positioning to 95.

–Engine: If you are going to use it as a pure winger and it will rarely shoot, it is not crazy to apply this chemistry to improve its quality. Up four Agility points, seven Balance points, and four Dribble points to get all three stats up to perfection. In addition to that vision, short pass and long pass receive a +5.

Useful links to use it in hybrids

You could use it to give Zaha TOTS chemistry, a very interesting attacker quality / price ratio. And we don’t know if special versions of other Ivorians like Cornet or Bailly will appear again in the future.

In his nationality we do not find too many usable letters, although yes some very interesting midfielders. Kessié Flashback appeared in SBC, Sangaré is weak in the sprint but still works very well as a pure CDM, and Fofana TOTS is another of the great defensive midfielders in FIFA 22.

Remember that We have a Telegram broadcast channel, in case you want us to notify you every time we upload a post about FIFA 22 Ultimate Team. You have a good day!