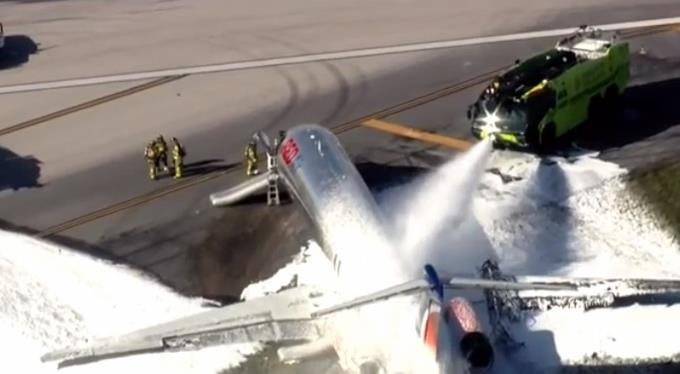 The National Transportation Safety Board (NTSB) determined that the MD-82 aircraft on flight 203 of the Dominican company Red Air, suffered a collapse of the main landing gear on the left side.

“The aircraft experienced a left main landing gear collapse during landing on runway 9, skidded off the runway and came to rest in a grassy area between runways 9 and 23. A post-accident fire on the right side of the aircraft continued to exit the runway”, says the first report issued through a press release.

This Thursday the cockpit voice recorder and the flight data recorder will be transported to the NTSB laboratory in Washington, to continue the investigation of the flight from the Dominican Republic to Miami, where there were 130 passengers and 10 crew.

“Investigators will document the aircraft and the runway markings and surroundings with still cameras and a drone over the next few days,” the statement said.

Based on Annex 13 of the International Civil Aviation Organization, The Dominican Republic has designated an accredited representative for the investigation.

The investigations are divided into five teams that will determine the operationswhich includes an interview with the crew members and their flight experiences.

Also studied is performance of the flight crew involved in the accident and analyzes all the factors “before the accident” that could be involved.

Similarly, we will examine the components of the hydraulic, electrical, navigation systemstire and associated parts of the aircraft, together with the instruments and elements of the flight control system.

Although a group of seven people with minor injuries has been quantifiedinvestigators are also tasked with determining occupant injuries related to the evacuation.

“The group looks at crashworthiness, the use or non-use of occupant restraint systems, and emergency egress. The group examines the performance of first responders and the subsequent triage and emergency transport of accident victims.

Last Tuesday a plane from the Dominican company Red Air bound for Miami, United States suffered an accident, after 5:45 in the afternoon, on the runway, which caused the aircraft to catch fire.

The plane eliminated a communications/radar tower that was in its wayalong with a small building in the area.