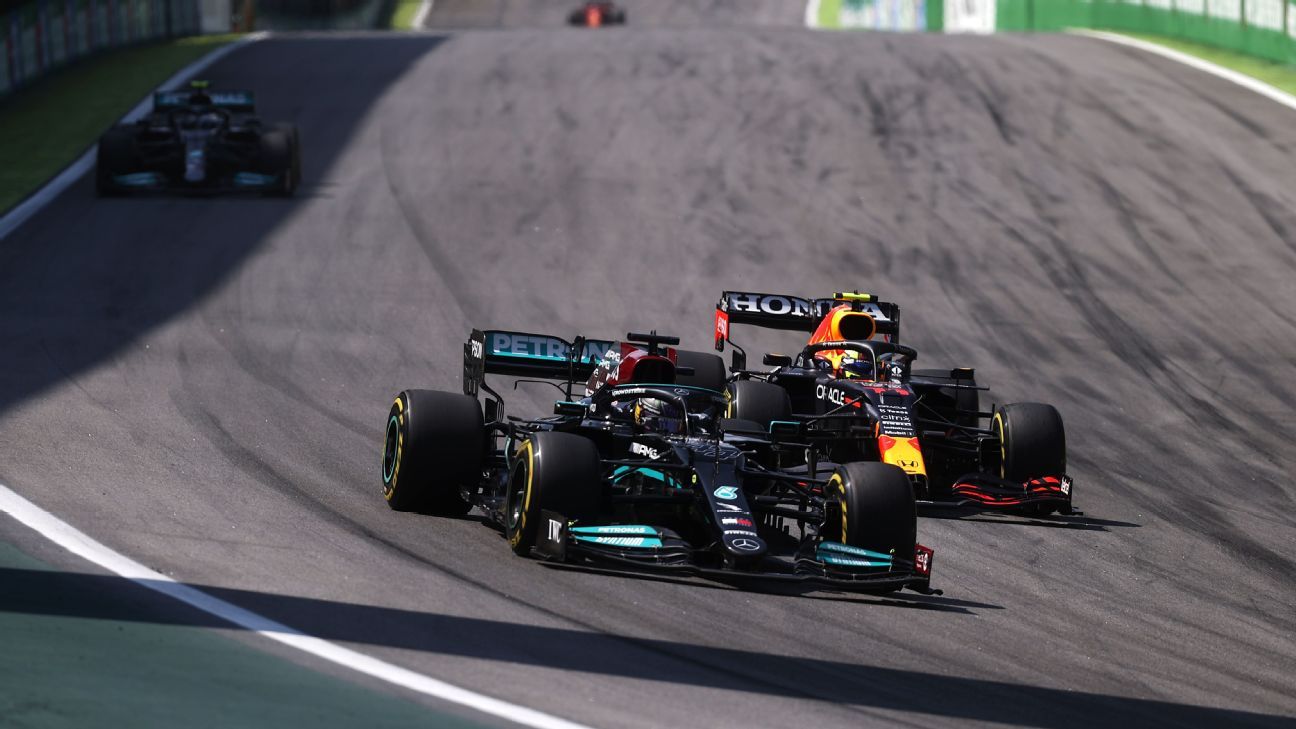 Brazilian GP in Interlagos, Sao Paulo; remember that all F1 is on Star +, subscribe here

Hamilton attacked but Verstappen defended to the limit. The two of them went outside at turn four. Positions are maintained.

PITS STOPS: Bottas on lap 41 and at the end of 42 Checo Pérez. All with new hard compound until the end of the competition. How much will the Hamilton stint stretch?

PITS STOP: Max Verstappen on lap 40 of 71. Red Bull put up some new toughs and until the end. Now RB tries to protect himself from the Mercedes undercut.

Hamilton on the attack! Now he’s within DRS shot of Max Verstappen.

Checo Pérez loses position against Bottas. A Virtual Safery Car favored the Finn and Mercedes. They took advantage of it when entering the pits.

Max Verstappen manages to keep his distance against Hamilton. The Dutchman is working hard to contain the champion’s attack.

Lap 18/71: Hamliton passes Checo in the first chicane. But then on the next line the passing answers. Then on the next lap, same maneuver but this time Lewis held position and HAMILTON IS SECOND.

Lap 17/71: Hamilton can now activate the DRS on Checo Pérez. The Mexican driver defends himself in sector two. On the straight the Mercedes is very strong.

SAFETY CAR, due to parts of Yuki Tsunoda’s car.

Hamilton, open lap three, fifth. They have no problem passing other cars. Recall that Lewis brings a new internal combustion engine in the Power Unit.

Lando Norris had to pit because of a flat tire.

START UP: VERSTAPPEN TAKES THE POINT. The Dutchman passed Bottas and Checo Pérez took advantage and also went on to the Finnish. Hamilton went from 10th to 7th.

Czech Pérez will start from the fourth position on Sao Paulo Grand Prix, 19th date of the F1 season. Follow the leaderboard here.

His direct rival will start from pole, Valtteri Bottas and with the other Mercedes, from the tenth drawer, Lewis Hamilton will look for the comeback. Max verstappen, who is competing for the drivers’ world championship against Hamilton, will start second.

These four drivers have enough new hard and medium tires to meet the fastest strategy according to data from Pirelli: start with medium compound; stop between 17 and 23 for hard tire; another stop from 42 to 47 to put another set of hard and go to the end.

Stewards confirm no investigation necessary for the incident between Vertsappen and Hamilton #BrazilGP 🇧🇷 # F1 pic.twitter.com/0fN72pZVqq

Here are the sets of tires the # Fit4F1 drivers have to work with for the #BrazilianGP 🇧🇷 # F1 # Fit4F1 #Formula 1 #Pirelli pic.twitter.com/Ea1o7lKKn9

An increase in ambient temperature is expected and therefore track, degradation will play a role throughout the race. Perhaps a more aggressive downgrade than teams expect.

There will be 71 spins per Autodromo José Carlos Pace of 4,309 kilometers to complete the Grand Prix distance of 305.9 kilometers. A circuit where Red Bull is doing well in the corners, especially in mixed zone two. However, the Mercedes are not bad at all and remain a formidable force on the straights – especially Lewis Hamilton, who has a new internal combustion engine.

The last winner was Max Verstappen in 2019 -the 2020 edition was canceled due to the pandemic of COVID-19-. But since 2014 when Mercedes’ dominance in F1 began, this organization has won four times.

The start of the training lap is scheduled for 11 in the morning, Central Mexico time …

Previous Ethereum: a major mistake that won’t dictate your short-term trend
Next Passion of hawks: everything that Lorena Meritano went through before becoming an actress | Dinora | Telemundo Telenovelas | FAME