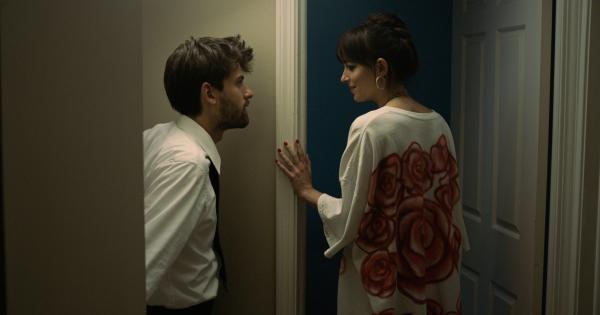 Every year, a new director rises as the hope of independent cinema at the Sundance Film Festival, this year it was Cooper Raiff, responsible for the sensation film of the edition, Cha Cha Real Smooth –

93%, directed, written and carried out by him. Winner of the Audience Award, Sundance was also the stage where a battle was waged between the streaming giants to take over the rights to its distribution, the winner was Apple TV + and as of this weekend it is already available in its catalog.

Co-starring and co-produced by Dakota Johnson, Cha Cha Real Smooth It can be classified as a romantic comedy, yes, it is, but its merit is that it goes beyond avoiding certain common places of the genre and claiming the new masculinity. Since its premiere in Park City, the film received very positive reviews from critics, who were pleased with the charming mix of rom-com, family drama and lots of dancing, as well as the talent of Cooper Raiff in his triple work as director, screenwriter and actor, showing why he is one of the cinematographic talents to watch.

The story revolves around Andrew (Raiff), a 22-year-old fresh out of college who doesn’t know what to do with his life, he has no choice but to return to his family in New Jersey. An expert in putting on good entertainment, he gets a job as an entertainer at his little brother’s classmates’ Bar Mitzvah parties. When he befriends a woman named Domino (dakota johnson) and his daughter Lola (Vanessa Burghardt), who has mild autism, Andrew develops a crush on Domino as he discovers the future he really wants…even though it may not be his own. The film also features an excellent performance by Leslie Mann, while the cast is completed by Raúl Castillo, Brad Garrett, Odeya Rush, Evan Assante, among others.

Heralded by critics as “an invaluable contemporary voice shaping the future of American cinema,” Cooper Raiff has won over pundits with a film that exudes authenticity and humanity without emotional restraint. Thanks to the sensitivity with which he portrays the bittersweet passage from youth to adult life, the reconciliation between the imagined life with the one he has, the search for himself and the certainty that nothing is forever, critics also see in Cha Cha Real Smooth the arrival of a possible classic, this because it sincerely captures the emotions and uncertainties of youth.

With nods to Judd Apatow’s films, some critics find similarities with The Graduate –

100%, likewise, agree that Cha Cha Real Smooth It stands out from the rest of the romantic comedies for its look at the new masculinity, the one that allows itself to feel, cry, get frustrated and dance.

Negative reviews are few, criticizing a tendency to be self-indulgent, intellectually unrigorous, “too pretentious to please and too empty to be loved,” says The Guardian’s Benjamin Lee. These opinions have not diminished the impact that the film has had among critics who have reviewed it positively, stating that it is one of those films that “hug”, “lovingly whisper” and make us feel less alone.

The attributes of the film are many, critics say that it is impossible to resist them. And whether it’s introducing us to a bold new director, or his poignant anti-toxic man manifesto, Cha Cha Real Smooth –

93% is the film that we should not miss. Here are some opinions from critics:

Ricardo Gallegos of the figurine:

‘Cha Cha Real Smooth’ hugs you and lovingly whispers in your ear a reminder that it’s okay to feel overwhelmed by life and not find your way through it. It is a film that radiates humanity providing romance, laughter, tenderness and yes, broken hearts. All balanced with impressive skill by the industry’s next big thing, Cooper Raiff.

Movies like Cha Cha Real Smooth that make us laugh, think, and cry deserve special celebrations for encouraging viewers to feel less alone, filling our hearts with courage to weather the storms that lie ahead in life. Cooper Raiff establishes himself as an invaluable contemporary voice shaping the future of American cinema through something so authentic and unfettered emotionally.

Rene Sanchez of Cinema Without Borders:

Cha Cha Real Smooth is more than the birth of a powerful voice within the independent scene of North American cinema. It’s the arrival of a would-be classic that honestly captures the emotions of an entire generation of young people.

Zach Youngs of In SessionsFilm:

There is a lot to say Cha Cha Real Smooth. It is a film that breaks rules and makes us reflect on who we are. It is also a tape that reminds you that life is hard, but if you pay attention, the good things will stay in your memory. Cooper Raiff has hit upon something completely divine and it will be a pleasure to watch his career from now on.

Raiff’s film captures the uncertainty of youth in a way that feels vulnerable and close. While she sometimes feels like she’s trying to pack too many messages into “Cha Cha Real Smooth,” it’s incredibly easy to give in to her charms.

‘Cha Cha Real Smooth’ has the ability to know how to naturally hide the writing of a master plan that is never diluted: offer a light product, but at the same time be faithful to the complexity of the feelings addressed. It’s the rom-com that has reached supreme bliss…

‘Cha Cha Real Smooth’ feels like a fitting showcase for a young auteur like Raiff and a portrait of how much cinematic masculinity has evolved – a truly moving manifesto for the anti-toxic man.

Diego Batlle of Other Cinemas:

The mix between romantic comedy, certain elements of family drama, a lot of dancing, political correctness and a fresh look at masculinity make it an irresistible temptation…

It’s a surprisingly tender and nonjudgmental look at the difficulties of navigating young adulthood and human connections, ably aided by Raiff’s direction and, of course, a wonderful performance from Dakota Johnson.

‘Cha Cha Real Smooth’ has no interest in intellectual rigor; it has all the narrative range and self-awareness of a self-indulgent fanfic.

Do not leave without seeing: The most anticipated films of Sundance 2022