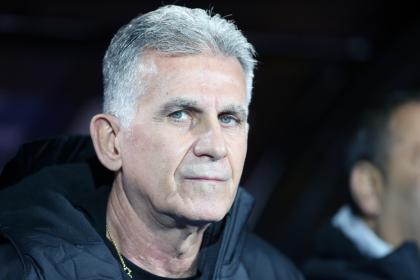 The Qatar 2022 World Cup left the departure of several technical directors who left the national teams after embarrassing presentations, or simply, for stepping aside and thinking about well-being and that the teams can improve with another helmsman in charge. When Iran came out in the first round in the group with England, the United States and Wales, Carlos Queiroz, an old acquaintance on the Colombian benches, resigned from him.

It was not easy for Carlos Queiroz to take the reins of Iran again, since in press conferences he felt extremely uncomfortable with the questions from journalists who always addressed the political situation that the Iranian country was experiencing. They achieved a victory that was highly celebrated by the players and coaching staff, but nothing could prevent the resignation of the Portuguese who will look for new airs.

And, those new airs could be in an Asian team that also played the World Cup for the first time in its history. Without playing the qualifiers, Qatar qualified automatically for being the host of the World Cup. The inexperience in these appointments was noted with Félix Sánchez who did not take out any unit in a group shared with the Netherlands, Ecuador and Senegal.

Days after the World Cup in Qatar, it was confirmed that Félix Sánchez would no longer be the technical director of the host team and that is why an old man known as Carlos Queiroz enters the scene. Carlos Queiroz, with experience in Asian national teams, appears as one of the serious candidates to take the reins of the Qatari cast. Continental media mention that the Portuguese is the perfect candidate to reach the national team.

If he does accept an offer, his arrival would be in February after Qatar plays the Gulf Cup. Thus, Carlos Queiroz will have the mission of taking the national team to the 2026 World Cup with more places available for the World Cup event in the United States, Mexico and Canada.

Previous Do light desks have their days numbered?
Next Netflix: series premieres in January 2023