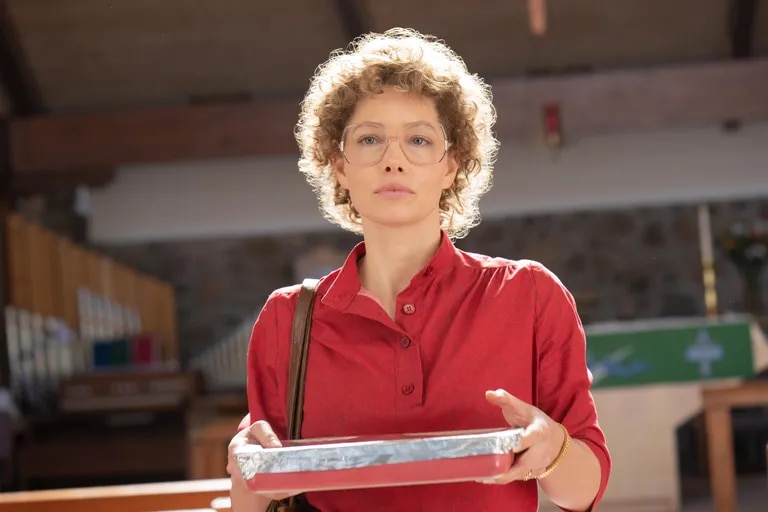 Based on a true crime, Candy works perfectly in his universe, he is even capable of absorbing several of the strategies of the true crime –create suspense even with the already known events of a police case, intertwine the past of victim and perpetrator with the same crime scene- in fiction, to turn a criminal act into the last link in a long chain of domestic pressures and frustrations marital. Despite this, it does not do much more than what this genre -extended in contemporary narratives- allows: accurately recreate a context to understand the emergence of the crime, less as an anecdote than as the result of an imperceptible and harmful state of affairs.

The portrait is that of a Texan town in the early 1980s where a small community shares a church and social activities as the axis of its belonging. Candy Montgomery (Jessica Biel) is the bubbly heart of this little microcosm, the one with the best house for parties, the one who invites her children’s friends over for sleepovers, the one who befriends the pastor to expand a stagnant spiritual life. . It’s just that her marriage to Pat (Timothy Simons) doesn’t seem very exciting, mired in routine and disinterest, drowning in comfort and predictability. For this reason, for Candy, the divorce from the shepherdess and the glimpse of that renewed sexual life that she is denied are the magical inspiration of a planned affair, a calculated adultery that allows her to make her fantasies come true without commitments or complications.

The other side of the coin is Betty (extraordinary Melanie Linskey), a wife just as frustrated as Candy but whose dissatisfaction finds other channels: the adoption of a child, the incessant calls to her husband, the grumpiness about being overweight, and wandering around. a domestic life in which he finds no objection. All of Candy’s efficiency, even in crafting a trap exit, in Betty translates into inaction, heaviness, an unbearable boredom.

The key to the miniseries, once it presented the brutal fact that unites them – a murder with an ax -, consists in breaking down that link, the border that unites and separates their lives, their husbands, their maternity, and what makes them friends or enemies. And he does it with a certain insidious look at the time, bordering on satire before morbidity, and putting the axis in the breeding ground that gestates the murder rather than in the gloating in its explosion. The staging uses a conscious deformation of the spaces –uncomfortable angles, chromatic games- and a disturbing sound treatment, with telephones that ring and silences that are prolonged, which manages to reveal that small domestic world like a pressure cooker.

The biggest setback of Candy It consists of swimming in a tide in which true crime turned into fiction has become the norm: Stairs, The Dropout, Inventing Anna, The Thing About Pam, The Girl from the Plainville; the list seems endless. Yes ok Candy finds its particular signs, it is imbued with the demands of a dynamic in which installing a question implies then feeding it with a context of action in which, ultimately, wealth is encrypted. Here it seems that Candy is the key to solve, the character that should give us the answers. However, the most interesting thing is condensed in the curious link that she develops with Betty, from the moment they meet: first, Candy becomes her ally, her incipient friend, her underground competitor, the her ruthless rival.

This game of opposites is also exposed in the registers handled by Biel and Lanskey: the former exudes a sensuality contained by boredom, a desire that a non-existent recipient needs to get out of that unbearable family life; and the second, an unresolvable displeasure, channeled into complaints, protests and a look of perplexed annoyance. Lanskey proves that she can turn that role of desperate housewife – which she curiously masterfully rehearsed in yellowjackets– in an insufferable and at the same time provocative figure, a victim charged with selfishness and pettiness, a perfect example of that domestic dissatisfaction that in the 80s promoted marital therapy -which also appears here- and the widespread fantasy of adultery -of which several fictions of that decade, with Fatal Attraction at the head, they are testimony-. It is there where Candy he finds his best way, much better than when – late in the episodes – he must comply with the rules of true crime and give an explanation – if that is possible – to the bloodbath that reached the police pages.